In Kansas City, it's dÈj‡ vu all over again 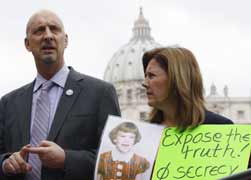 Barbara Blaine displays a picture of herself as a child and a banner saying, "Expose the Truth! Stop Secrecy," at a 2010 demonstration in St. Peter's Square. With her is Peter Isely. (CNS/ Reuters)

Here's how The Kansas City Star reported the new development:

"Allegations that a priest has molested a child can no longer be kept secret within the Catholic Diocese of Kansas City-St. Joseph [Mo.]," according to a policy approved by Kansas City's Catholic bishop.

"The new policy on sexual misconduct -- at 29 pages, about five times thicker than the old one -- spells out the diocese's legal obligation to report to state investigators cases involving alleged victims under age 18 ..."

According to The Star, the new policy is the work of a panel of laypersons assembled by the bishop "about 10 months ago, when he proclaimed "zero tolerance" toward clergy and other diocesan personnel who were found to have abused children."

The issue flared up last year, The Star when Jackson County's prosecutor criticized the diocese for refusing to provide names of parishioners who had accused a priest of caressing boys.

"I believe this diocese is taking the right steps," the prosecutor told The Star. "It's very important for allegations of this kind to be reported, because other children's safety could be at stake."

"Allegations against at least three priests in the diocese have become public in the last two years," The Star reported.

Sound familiar? It should. It's a familiar pattern.

Except that in this Star story, the bishop is Raymond Boland, not Robert Finn. The prosecutor is Claire McCaskill, not Jean Peters Baker. And the year is 1994, not 2011.

But it doesn't. Things temporarily quiet down until the next wave of the scandal surfaces.

This isn't just a pattern in the Kansas City church. In Philadelphia, Cardinal Justin Rigali is in spotlight. A few months ago, a grand jury there found that 37 Philly priests facing child sex abuse allegations were still on the job in parishes. The archdiocese's former secretary for clergy, Msgr. William Lynn, was charged with child endangerment, making him the highest-ranking U.S. church official to be charged with such a crime. A massive controversy erupted, and Rigali sprang into action.

He hired three new lawyers. He commissioned a study of church policies. Those policies are being tweaked right now. He nudged aside his second-in-command. And the beat goes on.

In Chicago a few years ago, Cardinal Francis George promoted Fr. Daniel McCormack even after the priest was arrested on suspicions of molesting a child. As in the Ratigan case (and others in Kansas City), the local church hierarchy had deliberately and repeatedly ignored "red flags" about McCormack's behavior around kids. When the Chicago priest was arrested months later for the second time, a firestorm of public protest was ignited.

The cardinal sprang into action. He hired a "full service investigations and security company," which found "multiple failures ranging from shoddy record-keeping and a profound lack of communication to inadequate monitoring policies that put children in danger." And its recommendations? More detailed church abuse policies on paper.

A common denominator in all these cases: No one is disciplined, demoted or defrocked. Church-paid lawyers who lead these "investigations" and write these "reports" can't completely ignore the wrongdoing that's been exposed. So they spin deliberate decisions as "mistakes," and acknowledge that "errors were made." They give the impression that if formal procedures are adopted, amended and followed, all will be well.

But no one who made those "errors" ever loses a day's pay.

Then, sadly, a few years later, we're all shocked to learn that Catholic officials are again revealed to be acting in the same reckless, callous and self-serving ways.

There's hope, however. Last week, The Kansas City Star reported that a Jackson County grand jury is looking at how Finn and his staff dealt with the Ratigan case. So there's a chance that -- for only the second time -- high-ranking church supervisors may face criminal charges for endangering kids.

[Barbara Blaine, a social worker and attorney, is president of Survivors Network for those Abuse by Priests (SNAP). She also holds a master's of divinity degree.]

Accountability | In Kansas City, it's dÈj‡ vu all over again