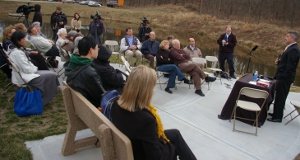 The agreement, between the bishop and Clay County, Mo., prosecutor Daniel White, allowed Finn to avoid criminal charges for failure to report suspected child abuse in that county in regards to the case of diocesan priest Fr. Shawn Ratigan, who was arrested on charges of child pornography last May.

As part of the agreement, Finn agreed to meet with diocesan parishes in that county to outline diocesan reporting procedures for suspected child abuse. Finn also agreed to monthly meetings with White to discuss all reported suspicions of abuse in the county, and to appoint a new director of child and youth protection.

A prosecutor in Jackson County, Mo., charged Finn and the Kansas City diocese with separate counts of failing to report suspected child abuse last October. Those charges, which were brought by prosecutor Jean Peters Baker, are the first of their kind in the quarter-century-long clergy abuse scandal.

While diocesan officials were first made aware of pornographic images on the priest’s computer in December 2010, they did not report the incident to civil authorities until the following May. In the Oct. 14, 2011, indictment, Peters Baker alleged that delay had put area children at risk.

The first hearing in Finn’s Jackson County case is now set for Jan. 26. Originally set for Dec. 15, it had previously been continued to Jan. 12.

Mike Mansur, the communications director of the Jackson County prosecutor’s office told NCR Monday the new date came after the bishop’s lawyers made another request for a continuance.

At Saturday’s meeting with parishioners at St. Charles Borromeo parish north of the Kansas City downtown area, much of the presentation was made by staff members of the diocese’s child protection offices, said Mercy Sr. Jeanne Christensen, a member of neighboring Holy Family parish who attended the event.

While Finn made opening remarks, Christensen said most of the talking was lead by Jenifer Valenti, the diocesan ombudsman for reporting abuse, and Carrie Cooper, its new director of child and youth protection.

Christensen said about 50 people attended the meeting, which lasted about an hour and 15 minutes.

Christensen, who served as the diocesan victims' advocate from 2000-2004, also said the diocesan staff members gave the audience “a lot of information” about how to report abuse, and advised anyone suspecting abuse to first call police before calling the diocese.

The diocesan staff also “put a lot of responsibility back out to the audience,” Christensen said, to be sure to report any signs of abuse immediately.

At the same time as the parish meeting, about 60 Kansas City-area Catholics rallied to show support for Finn in the Jackson County case. Gathering in a park north of the downtown area of the city, the group said a rosary together before listening to speakers who said the bishop’s prayer life was “holy,” and that Peters Baker’s case against Finn was “without legal merit.”

Among those addressing the “Justice for Bishop Finn” rally was Michael Quinlan, a St. Louis-area attorney who said while he had no personal connection to Finn, he wanted to speak about the legal background surrounding the bishop’s case.

Referring to the statute under which Peters Baker’s charged the bishop, Quinlan said the prosecutor’s interpretation of Finn as a “mandated reporter” of sexual abuse was overly broad.

“If you interpret [the statute] the way the prosecutor is, it leads to absurd results,” Quinlan said.

Also addressing the group Saturday was Jack Cashill, an independent writer and reporter who said press coverage of the case against Finn had been biased.

Referring to the fact that there had been 110 murders in Kansas City in 2011 that did not receive the same extensive local coverage that Finn’s case did, Cashill said the press was trying to “poison the well” of potential jurors. He told the audience they needed to tell their friends about the biased coverage, and should try and convince people of the bishop’s innocence.

“You’ve got to know the story better than anyone else,” Cashill told the bishop’s supporters. “You are responsible to get that message out.”

The second, “Plan for the community to protect God’s children,” included five steps for community members to follow to ensure their own vigilance in reporting abuse.

One area where Christensen expressed criticism with the parish event was in Finn and the diocesan staff’s reluctance to talk about past instances of abuse or sexual misconduct by priests.

There was “absolutely no mention of adult survivors who were abused by priests when they were children,” Christensen said.