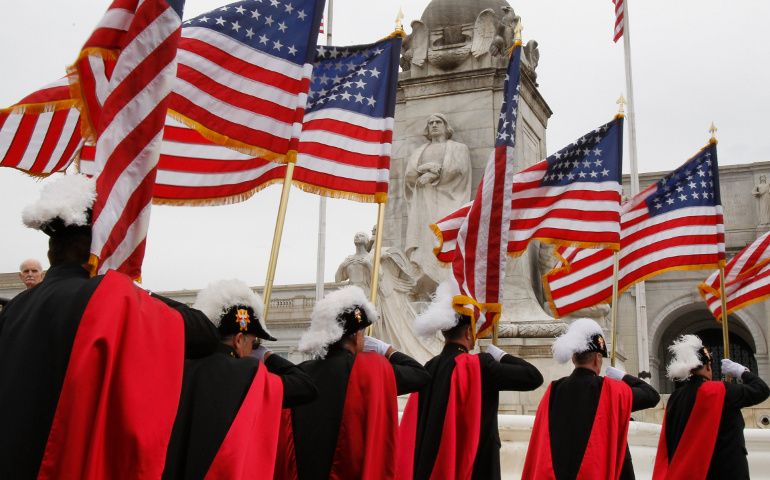 Members of the Knights of Columbus carry American flags during the National Columbus Memorial Centennial Celebration outside Union Station in Washington in 2010. (CNS/Bob Roller)

The Knights of Columbus, the U.S. Catholic fraternal organization known for its wide-ranging charitable work and parish fish fries, has been a significant contributor to political efforts opposing same-sex marriage across the country, according to a study commissioned by a coalition of Catholic groups that support same-sex marriage.

Since 2005, the Knights of Columbus has provided "$6.25 million directly to anti-marriage equality efforts" and has additionally provided about $9.6 million "for broader efforts ... to discriminate against gay or lesbian couples in the name of religious freedom," says the report, released Thursday.

Earlier this year, a coalition called Equally Blessed commissioned a study of the Knights' tax filings, annual statements and other public documents between 2005 and 2012. The result is a 37-page report, "The Strong Right Arm of the Bishops: The Knights of Columbus and Anti-Marriage Equality Funding."

Since 2005, several million dollars have gone from the Knights directly to organizations involved with state ballot initiatives on same-sex marriage, says the coalition, which is made up of Catholic groups Call To Action, DignityUSA, Fortunate Families, and New Ways Ministry.

The report also states that the Knights have yet to file their 2011 tax return because they asked for an extension of the April deadline, so the total sum for donations could be higher.

While many of the findings detailed in Thursday's report have been reported previously, the report for the first time lays out the Knights' contributions on the state level in a way that indicates how the organization has dedicated its resources to the effort over the better part of the last decade. Where possible, NCR has verified the figures in the report.

The Knights have also donated more than $1.1 million to the U.S. bishops' Subcommittee for the Promotion and Defense of Marriage, which was first announced in 2008 as an ad hoc "joined effort" between the Knights and the bishops' conference, the report states.

Among other findings in the report, verified through public records:

The Equally Blessed group criticizes the Knights' donations to the U.S. Conference of Catholic Bishops as "essentially untraceable."

"Since the USCCB is part of the Catholic Church and does not have to report its charitable contributions, money given to the USCCB's anti-marriage equality efforts is essentially untraceable unless it shows up in specific state-level reporting requirements," the report states.

"This is especially important because it makes it difficult to ascertain how much the church has invested in influencing voters in Washington, Maryland, Maine and Minnesota, where marriage equality-related initiatives are on the ballot in November 2012," the report says.

One tax lawyer noted for his work on nonprofit tax law told NCR it is unclear whether the Knights' donations might affect their status as a tax-exempt organization. The Knights' national organization, which reported total assets of some $16.9 billion in 2010, is classified as a "fraternal beneficiary society" by the Internal Revenue Service.

"There's not much guidance on what it means to be a fraternal organization and what activities are appropriate and in what amounts," said Marcus Owens, a former employee of the exempt organizations division at the IRS who is now a lawyer for the Washington-based Caplin & Drysdale law firm, which Owens said has represented the Knights in the past.

The lack of guidance on the matter, Owens said, suggests the IRS would judge political contributions by whether the "purpose of the particular political act was somehow related to the interests of the members of the fraternal organization" and whether the political activity "didn't swallow all of the activities of the organization."

The IRS, however, could also decide that a tax could apply on the organization's political contributions, Owens said. In that case, he said, the tax would be assessed on either the organization's net investment income for the appropriate filing year or the amount spent on the political activity, whichever was lesser.

"Let's say that the Knights give $10 million in one year," Owens said. "They'd be taxed at the corporate income tax rates for that $10 million as a political gift."

According to the report and public records, the Knights also made significant contributions between 2006-2010 to a number of right-leaning advocacy groups.

Some of the largest contributions during that period -- totaling at least $1.2 million, according to tax filings -- went to the Becket Fund for Religious Liberty, a nonprofit law firm known for its efforts to spearhead legal challenges to the Obama administration's mandate requiring health insurance providers to cover contraceptive services.

The U.S. bishops' conference also has ties to the Becket Fund. Its associate general secretary and general counsel, Anthony Picarello Jr., previously worked at the fund for seven years before joining the conference in 2007.

In a statement to the media Thursday, the Knights of Columbus responded to the Equally Blessed report by saying its funding of measures to oppose same-sex marriage represents a small fraction of its spending.

"The Knights of Columbus supports Catholic Social Teaching and the bishops of the Catholic Church, and some resources have long been dedicated to promoting that teaching on moral issues," the statement says.

"This report mentions $6.2 million donated by the Knights over the past seven years, during which time we also donated more than $1 billion to charitable causes, with more than $225 million of that coming from our Supreme Office."

The report on the Knights was issued the same day a federal appeals court in Manhattan, N.Y., struck down the federal ban on same-sex marriage, making it the second appeals court this year to reject the contested Defense of Marriage Act.

Thursday's decision by the Manhattan federal court, which follows a decision by a federal appeals court in Boston, sets the stage for the U.S. Supreme Court to take up the matter in the next year.

The Equally Blessed report was funded by contributions from the coalition's four organizations, the Human Rights Campaign and several individual donors, according to a press release.