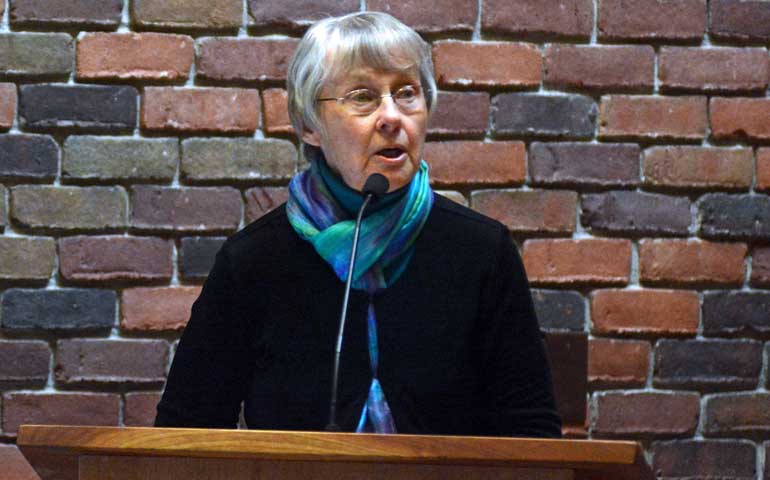 Evelyn Shellenberger, a former board member of the Goshen Biblical Seminary, speaks during a special service to acknowledge and apologize to the victims of John Howard Yoder March 22 at the Chapel of the Sermon on the Mount in Elkhart, Ind. (Sarah Welliver)

The Anabaptist Mennonite Biblical Seminary community gathered for an emotional service March 22 to acknowledge the pain and trauma inflicted on more than 100 women who were sexually violated by renowned theologian John Howard Yoder.

It was the first time the seminary publicly took responsibility for the abuse and neglect, which happened in the '70s and '80s and was first publicized by The Elkhart Truth in 1992.

It was also the first time leaders in the seminary publicly apologized to the women who were victimized.

"What was done to you, whether sinful acts of commission or omission, was grievously wrong," current seminary president Sara Wenger Shenk said during a lengthy apology. "It should never have been allowed to happen. We failed you. We failed the church. We failed the Gospel of Jesus Christ."

Yoder also taught theology at the University of Notre Dame for 30 years.

Yoder was a theologian and ethicist known widely for his teaching on Christian nonviolence and pacifism. The Politics of Jesus, first published in 1972, was his best-known work.

Nearly two decades after he left the seminary, a denominational task force launched an investigation and confronted Yoder with 13 charges of sexual abuse. The Indiana-Michigan Mennonite Conference suspended Yoder's ministerial credentials in response and referred him to counseling.

Although Yoder maintained he never intended any harm to the women, he never disputed the charges and he cooperated in the disciplinary process.

The women, who experienced sexual violations ranging from sexual harassment in public places to sexual intercourse, were largely left without closure -- until recently.

Mary Klassen, communications director at the seminary, said there has always been an undercurrent of stories and innuendo that surfaces and wanes.

About five years ago, when Shenk came to Anabaptist Mennonite Biblical Seminary as president, it surfaced again.

Women approached her to inform her there was unfinished business regarding Yoder's actions, and she listened. Ervin Stutzman, executive director of Mennonite Church USA, was hearing the same calls to action.

"The two of them decided it was time to move," Klassen said. "It was the sense that there was unfinished business that made them open it up, because that's the only way to move toward some type of healing."

Shenk and Stutzman convened a discernment group to continue reconciliation work and answer ongoing questions about how the church responded to the allegations. Part of that effort included commissioning historian Rachel Waltner Goossen to tell the full story.

Goossen was provided access to previously closed files related to Yoder, and she interviewed 29 individuals, including Yoder's victims, his colleagues and former seminary administrators.

Her report, titled "Defanging the Beast: Mennonite Responses to John Howard Yoder's Sexual Abuse," was published in the January 2015 issue of The Mennonite Quarterly Review.

The March 22 services were another step on behalf of the seminary to admit to wrongdoing and help the women harmed by Yoder heal and find closure.

About 50 gathered at an intimate morning session where women harmed by Yoder's actions and the seminary's inadequate response shared their stories. Current and former faculty, administration and board members were also in attendance, only to listen.

That portion was not open to the media, but Klassen said several of the women told her that they had never been invited to share their pain openly and it was helpful. The session was also helpful to Klassen, who had read the articles and research but had never put a face with the names of the abused.

"It made it so real in ways that nothing else had, and that made the afternoon service that much more powerful," she said.

Evelyn Shellenberger, who served on the Goshen Biblical Seminary board from 1976 to 1987 and was chair from 1983 to 1987, also met with the women and heard their stories for the first time March 22.

She apologized for her part in allowing the abuse to continue, and said she did not know how to use her power as a board member to stop Yoder's abusive behavior. She said she met with Yoder regularly for three years in attempts to change his way of thinking, but she now realizes that was not enough.

"As I listened to your personal stories, your painful stories, I couldn't imagine why I was so silent about what was happening," she said. "I realize now by speaking about you as a letter or a number, this was very depersonalizing. It made the pain you were dealing with seem less real."

Shenk then read a public apology on behalf of the entire church community. She said she struggled at first with the thought of confessing to something that happened on somebody else's watch. But eventually, she realized she must denounce the acts of evil that happened under the watch of the seminary.

"Along with so many others, we fell prey to our desire for a hero," she said. "Enamored by the brilliance that put our treasured peace theology on the world stage, we failed to truly listen to those whose bodies, minds and spirits were being crushed. There is no excuse."

Shenk apologized on behalf of the seminary for neglecting to listen and for isolating those who were abused.

Seminary faculty and board members stood together during the afternoon service and read statements of commitment, pledging to do all in their power to prevent future abuse and promising to listen to men and women who have experienced sexual abuse.

They resolved to be diligent in educating themselves about sexual misconduct and to follow the procedures set out in the seminary's sexual misconduct policy. They pledged to create a safe campus environment for all students, employees and guests.

"We are not left without hope," Shenk said. "We long for your restored trust, even on some distant day, for your forgiveness."

[Michelle Sokol is education reporter for The Elkhart Truth, where this article first appeared. Reprinted with permission.]

A version of this story appeared in the April 10-23, 2015 print issue under the headline: Mennonite seminary apologizes to victims of famed theologian.