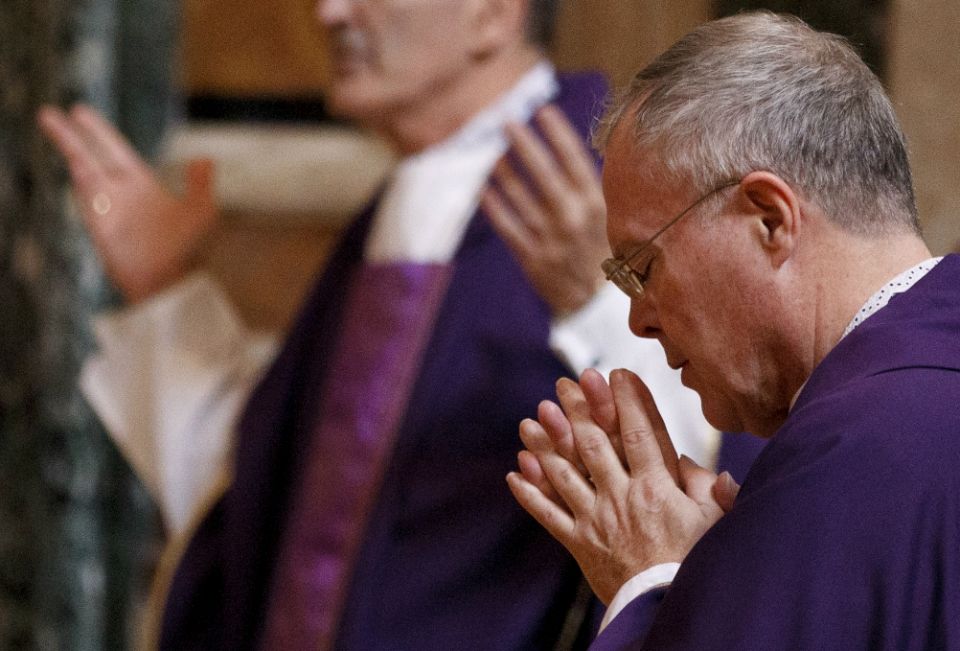 Bishop Michael Hoeppner of Crookston, Minnesota, concelebrates Mass with other U.S. bishops from Minnesota, North Dakota and South Dakota at the Basilica of St. Mary Major in Rome in 2012. (CNS/Paul Haring)

Story updated Sept. 28 at 4:10 p.m., CDT, with additional details of the letter signed by Ronald Vasek.

The Diocese of Crookston, Minnesota, has settled one part of a lawsuit brought by a deacon candidate who accused his bishop of coercing him into silence about alleged sexual abuse by a past vicar general.

The rural northwestern Minnesota diocese announced Sept. 20 that a settlement had been reached on charges brought by Ronald Vasek against Bishop Michael Hoeppner. In May, Vasek sued Hoeppner on counts of coercion and intentional infliction of emotional distress, in addition to bringing negligence and public nuisance claims against the diocese.

The settlement closed the charges brought personally against the bishop, with Hoeppner agreeing to pay Vasek an undisclosed financial sum, as well as providing a letter signed by Vasek at the center of the case. A copy of the letter was released Sept. 28 by Vasek's attorney Jeff Anderson.

In a statement Sept. 20, the Crookston Diocese said, "The settlement agreement does not constitute any admission of unlawful conduct or wrong doing by Bishop Hoeppner."

The coercion charge was a first brought against a U.S. bishop, said Anderson, who described it as "a bold, we thought justified, claim."

A candidate for the diocese's permanent diaconate, Vasek, 62, said his ordination was put in jeopardy after Hoeppner pressed him to sign a letter in October 2015 retracting his disclosure to the bishop several years earlier that he was abused as a teenager by Msgr. Roger Grundhaus. The monsignor, under suspension from public ministry while the diocese conducts an investigation, served as vicar general from 1991 to 2007.

According to Vasek, the abuse, described in the lawsuit as "unpermitted sexual contact," occurred in 1971 when he was 16 years old while he accompanied Grundhaus on a trip to Ohio for a meeting of canon lawyers.

Vasek also alleged that Hoeppner threatened his son, who is a priest in the Crookston diocese, if the elder Vasek didn't sign the letter rescinding his abuse accusation.

"I signed that letter to protect my son, because I knew how evil a man the bishop could be if he wanted to be," Vasek said during a press conference May 9 introducing the suit.

The letter read: "I, Ron Vasek, regarding a trip I was on when I was 16 years old, and on which a priest of the Diocese of Crookston was also participating, clearly and freely state that I have no desire to nor
do I make any accusation of sexual impropriety by the priest toward me." 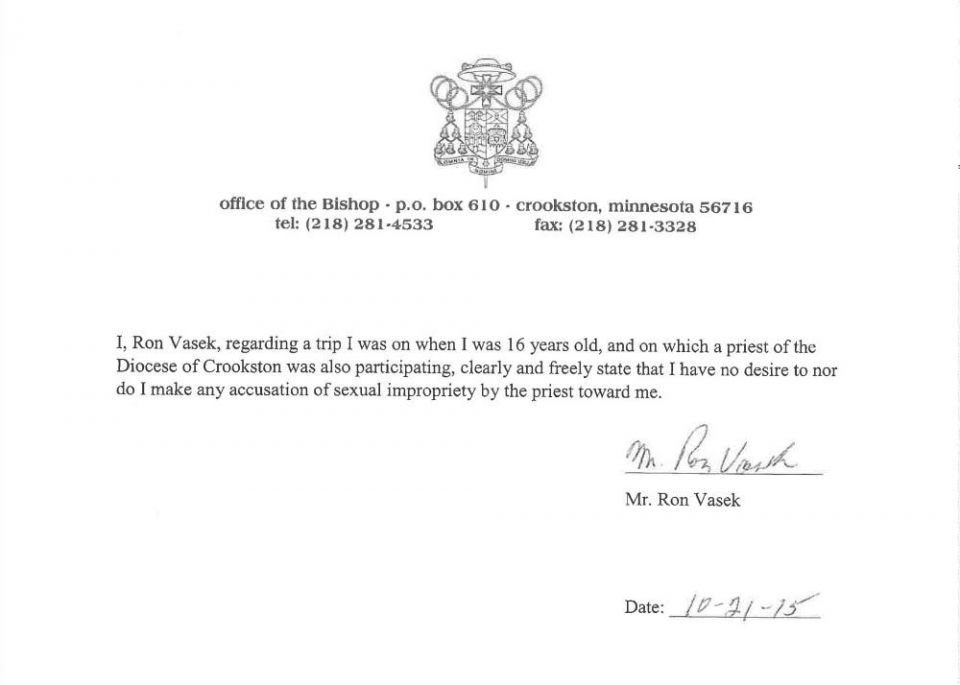 A copy of the October 2015 letter signed by Ronald Vasek, which was released by his attorney Jeff Anderson.

Hoeppner, in a statement issued at the time of the lawsuit, said he "categorically denies that he in any way forced, coerced or encouraged Mr. Vasek to not pursue his allegations regarding Msgr. Grundhaus." The diocese said it reported Vasek's allegations to law enforcement in 2011.

The bishop continued: "Looking back and knowing what I do now, I believe I would have handled my conversations with Mr. Vasek differently."

That Hoeppner had to turn over the letter in question was an important and satisfying outcome for Vasek, said Fr. Robert Schreiner, a longtime friend who attested at the May press conference that he believed Vasek's account.

"That's always been the pain of it for him, since 2015, was that he was made to sign a lie. And that that piece of paper is back now, he's happy about that," Schreiner told NCR.

Vasek said it was during his discernment to become a deacon in the late 2000s that he ended his silence about the alleged abuse, in a conversation with a priest of another diocese.

Vasek's deacon class was ordained June 10 without him. He still desires to be ordained someday, said Schreiner, who led the diocesan office for the permanent diaconate while Vasek was in the program. The priest resigned that position on May 9 — the same day he stood beside Vasek in a show of support at the press conference.

In his Sept. 27 statement, Hoeppner said he was willing to ordain Vasek, but respected his decision not to enter diaconal ministry at this time. In May, Vasek said he did not trust the bishop and could not swear obedience to him, one of the promises a candidate makes during the ordination ceremony.

The remaining charges of the lawsuit against the Crookston Diocese — three counts of negligence and two counts of public nuisance — were argued at a court hearing Sept. 20 before Minnesota District Court Judge Kurt Marben. He has 90 days to decide whether to grant the diocese's motion to dismiss or to allow the claims to proceed to trial, though a decision is expected sooner.

The judge is also expected to decide on separate sanctions brought by Anderson against the diocese, alleging noncompliance with regard to a 2015 court order that required it to produce all the names and files of priests who had been accused of sexual abuse. In addition to Grundhaus, Anderson said his law firm has uncovered three additional alleged abusive priests not included by the diocese in its disclosure.

Schreiner, pastor of St. Joseph's Church in Red Lake Falls, said that people in the Crookston area are closely following the case's proceedings.

"They just really want the truth to come out in its totality," the priest said of friends and parishioners who have spoken to him about the lawsuit. "And that all the actors involved would be honest and tell the truth."

SNAP conference opens by looking back, looking ahead