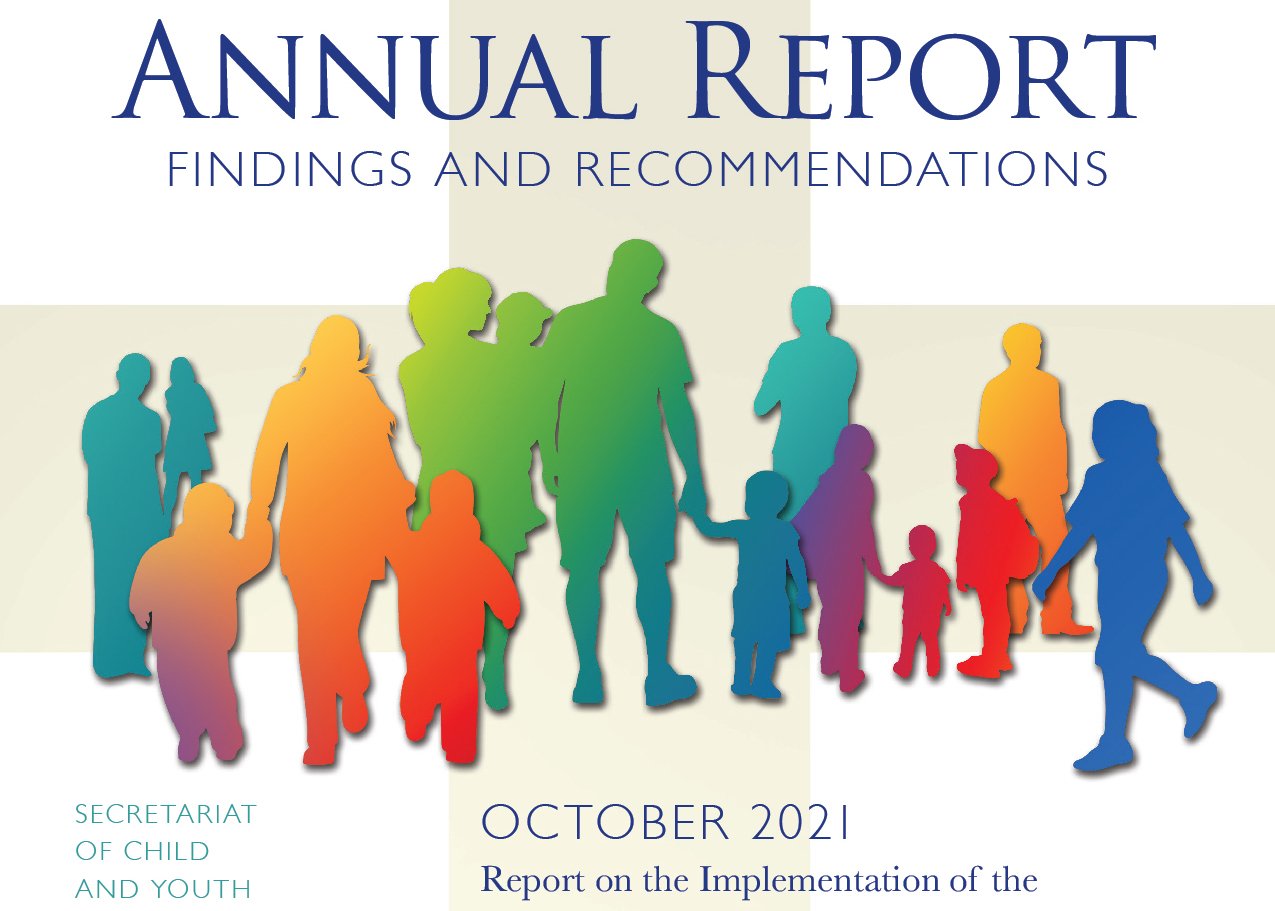 This is the cover of the October 2021 report on the implementation of the U.S. Conference of Catholic Bishops' "Charter for the Protection of Children and Young People," released Nov. 9, 2021, by the USCCB, the Secretariat of Child and Youth Protection and the National Review Board. (CNS photo/courtesy USCCB)

More than 4,200 allegations of sexual abuse of minors by Catholic clergy and others were reported during the year ending June 30, 2020, a slight decline from the previous auditing period, according to a report on diocesan and eparchial compliance wit the U.S. bishops' "Charter for the Protection of Children and Young People."

The charter was adopted in 2002 by the U.S. bishops following widespread reports of clergy abuse and has been revised several times since to adapt to changing situations surrounding the question of clergy sexual abuse of minors.

Conducted by StoneBridge Business Partners of Rochester, New York, the new report covers the year from July 1, 2019, through June 30, 2020.

While the number of allegations remained high during the audit period, the report said only 22 allegations involve current cases of abuse.

The report said the number of allegations remained high in part because of changes in statutes of limitations on reporting abuse in several states. "It should be noted that the vast majority of these reports were historical in nature," the report said.

The report attributed about 66% of allegations to lawsuits, compensation programs established by dioceses and other entities and bankruptcies. In addition, 1% of allegations emerged after a review of clergy personnel files, according to the report.

Of the 22 allegations for the current year, six were found to be substantiated. The report said they originated from five dioceses.

Of the remaining reported allegations, seven continued to be investigated, two were unsubstantiated, three were determined to be "unable to be proven," and four were classified as "other."

The report said nine of the allegations involved the use of child pornography. Seven of those cases remained under investigation, one was substantiated and one was referred to a provincial or a religious order.

The allegations involved 2,458 priests, 31 deacons and 282 unknown clerics, statistics in the report show.

The Syro-Malankara Eparchy of St. Mary Queen of Peace of the United States and Canada and the Chaldean Catholic Eparchy of St. Peter the Apostle of San Diego did not participate in the audit.

Of the 61 entities undergoing onsite audits, two dioceses and two eparchies were determined to be in noncompliance.

The dioceses of Fort Worth, Texas, and Helena, Montana, were noncompliant with charter's requirement for not having their respective Diocesan Review Board meet during the audit period. Subsequent to the audit, the boards in each diocese were convened, making them compliant with the charter, the report said.

Meanwhile, the Ukrainian Catholic Eparchy of St. Nicholas in Chicago and the Syriac Catholic Eparchy of Our Lady of Deliverance, which covers the United States and is based New Jersey, were found noncompliant with charter provisions that require background screening and training of adults working with minors.

The report also acknowledged the continuing work of church entities to ensure the safety of children and vulnerable adults. The USCCB said that expenditures on protective services rose 15% in 2020 with more than 2.5 million background checks of adults and training in safety measures for 3.1 million children.

Suzanne Healy, who chairs the National Review Board, said that as the charter enters its third decade of implementation it becomes important to continue evaluating incidents of abuse as well as understand trends of abuse and why they change.

In a letter to Los Angeles Archbishop José H. Gomez, USCCB president, that accompanied the report, Healy said a board committee is examining the safe environment education programs for adults and children in dioceses throughout the country.

"The research is an attempt to determine which elements or combination of elements of these training programs is most effective in mitigating the occurrence of child abuse and ensuring that any suspicion of abuse is reported to authorities," Healy wrote.

She also said the board recommended two procedures be added to the audit process and welcomed their edition for the 2020-2021 audit cycle. The first is "a three-year look-back window, which will eliminate any gaps that existed regarding the reporting of case resolution," Healy said.

The second relates to onsite visits by StoneBridge that finds auditors meeting with all or most diocesan review board members rather than one or two individuals.

"The ministries of safe environments and victim assistance are here to stay. The protocols and procedures for letters of suitability, background checks, and safe environment training are the norm," said Deacon Bernie Nojadera, executive director of the USCCB Secretariat for Child and Youth Protection.

"By the grace of God, the church is working toward being accessible, accountable, and safe. We continue to rely on the Holy Spirit and the intercession of Our Mother to guide our efforts as we promise to protect and pledge to heal," he wrote in a letter addressed to Archbishop Gomez and Healy that was included in the report.

In his preface to the report, Archbishop Gomez said: "As we know, one allegation of abuse is too many. But my brother bishops and I remain firmly committed to maintain our vigilance in protecting children and vulnerable adults and providing compassion and outreach to victim-survivors of abuse."

Speaking for himself and the body of bishops, the archbishop expressed their "sorrow and apologies to every person who has suffered at the hands of someone in the church."

"While we cannot give you back what has been taken from you," Archbishop Gomez said, "we do commit ourselves to doing everything in our power to help you to heal and to fight the scourge of abuse in the church and in the wider society."