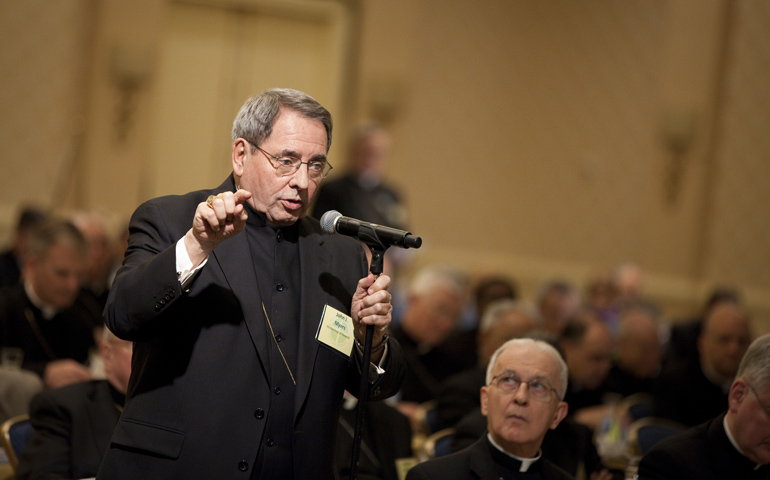 About 70 advocates for victims of childhood sexual abuse gathered Sunday on the lawn of St. Joseph Church in Mendham, N.J., for the rededication of a monument to sex abuse victims that was vandalized twice in the last 17 months.

Almost as powerful as the sledgehammer that first destroyed the millstone monument in November 2011 was an article in the day's Newark Star-Ledger disclosing that a New Jersey priest -- Fr. Michael Fugee of the Newark archdiocese -- who admitted in 2001 to molesting a teenage boy was allowed back in ministry to Catholic youth despite having signed a binding agreement barring him from unsupervised contact with minors.

The revelations in the article "show a terrible disregard for children," said Theresa Padovano, co-director of the New Jersey affiliate of Voice of the Faithful, citing "lack of accountability" by church officials. She said all names of accused molesters should be made available digitally "so people can check them out" or abusers should go to prison where they cannot harm children.

Mary Gannon of Floral Park, N.J., said she worries for all children, not just her four grandchildren, and said she finds it impossible to understand how anyone could mistreat a child. She said she and her husband, Gerry, support survivors "because they're still suffering all these years later."

Gannon said forgiveness has a place when it comes to abuser priests, "but there has to be justice."

She said when Catholics feel maligned when these stories repeatedly appear in the press, she tells them: "Don't forget, we are the church, and we have to act courageously to change things."

She said she thought Catholics were confused when Cardinal Bernard Law, who was accused of covering up sexual abuse in Boston, "was elevated by the Vatican to a place of prestige in Rome." Catholics might have forgiven him had he instead entered a life of humility in a monastery, she said.

While some New Jersey Catholics voiced dismay and disgust with Fugee appearing at retreats with teenagers and hearing their confessions, others expressed alarm that the priest has held two positions in the Newark archdiocese. Fugee co-directs the Office of Continuing Education and Ongoing Formation of Priests and heads the Office of the Propagation of the Faith.

Retired Carmelite Fr. Joseph O'Brien of St. Cecilia's Parish in Englewood, N.J., said he saw no conflict in directing the Office of the Propagation of the Faith and being a priest with a past. O'Brien, who runs the mission outreach for the Carmelites and who talked to Fugee by telephone on Ash Wednesday, said all that's needed to run a mission office is a secretary and a phone.

However, he said he understood why those who learned Fugee had broken his binding agreement were angry about it. "And they have every right to be," O'Brien said.

Mark Crawford, state director of the Survivors Network for those Abused by Priests, is angry. He said it's clear in the memorandum of understanding Fugee signed in 2007 with the Bergen County prosecutor's office that he is restricted from having contact with children "for as long as he is a priest and not just when he is a priest of the archdiocese."

Crawford said both Fugee and Newark Archbishop James J. Myers "have shown a real contempt for civil authority and have openly acted above the law." For this, they must be held accountable, he added.

Grace Collins, a parishioner at St. Mary's in Colt's Neck, N.J., where Fugee was involved in youth work, retreats and trips with teens to Canada, said it was "totally unacceptable" that her pastor, deacons and youth minister did not inform parents of Fugee's background as an abuser. "The buck stops with the pastor," she said.

The pastor -- Fr. Tom Triggs, a former diocesan director of youth ministry for 17 years -- "ought to have learned enough in that job to be very careful," Collins said. "All these parents think their kids are safe to go off again with this person. ... It's his responsibility to check these people out."

Collins also faulted youth minister Amy Lenehan, a teacher and longtime friend of Fugee, for inviting the priest to attend retreats when other scheduled clerics were unable to attend.

"She should be held accountable," Collins said. "If this stuff continues to happen, there's no way people will be sending their kids to a retreat or on a church-sponsored trip."

"It's very sad," Collins said. "There are plenty of people with clean backgrounds, but these people all need to be checked out."

"There has to be a place where a pastor can go to access this," she said.

O'Brien said anyone who knows how to use a computer can find data online even if the archdiocese hasn't posted it on an official site. While O'Brien said he feels sad for abused children, he also feels for the accused, too.

He said he hopes the new pope will deal with the sexual abuse matter.

"We need a church that's real and for real people," O'Brien said, adding that he believes Pope Francis can deliver on that need.

Meanwhile, St. Joseph's Parish in Mendham has installed security cameras and a motion-activated light that will flip on when someone approaches the twice-vandalized monument at night. Fr. Joseph Angiolini said he hopes that will stop any further vandalism -- and he prays that further abuse of children can also stop.

[Patricia Lefevere is a frequent contributor to NCR.]