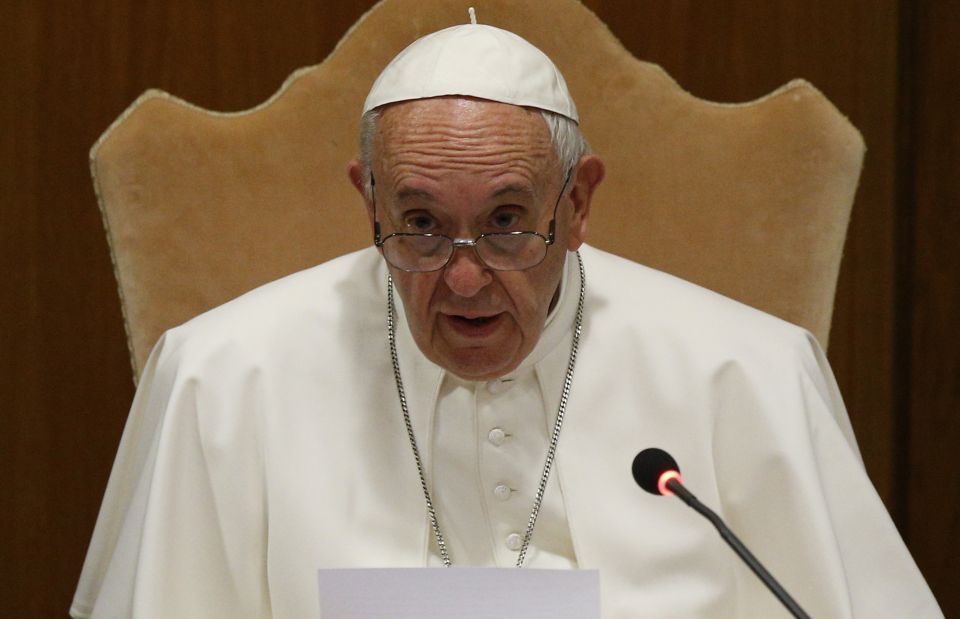 Pope Francis speaks at the opening of the annual spring meeting of the Italian bishops' conference at the Vatican May 20, 2019. (CNS photo/Paul Haring)

Three months ago, Pope Francis called for an "all-out battle" against the scourge of sexual abuse by Catholic priests and bishops. Now the Holy Father is making meaningful progress in the fight to protect the innocent and purify the church, and he deserves praise for his strong leadership.

This month, Pope Francis ordered every diocese to develop a system that allows the public to submit allegations of abuse by any church official. Crucially, this includes bishops, archbishops, and cardinals, all of whom have historically escaped such oversight. Once the policy goes into effect on June 1, every diocese in the world — including roughly 200 in the United States — must immediately submit credible allegations against bishops to the Vatican, which will decide whether to open an investigation within 30 days.

For a 2,000-year-old institution like the Catholic Church, such speed is rare — and welcome.

The influence of the American church is evident in this papal policy. It institutes a laudable proposal, championed by Chicago Cardinal Blase Cupich, in which the investigation of a bishop would be overseen by his superior bishop in the relevant geographical region — the "metropolitan," who is usually an archbishop or a cardinal. If the metropolitan is himself under investigation or otherwise not suited to lead an inquiry, the Vatican may choose someone else, such as a neighboring metropolitan. Whoever it is, he must complete the investigation within 90 days, although Rome can extend this deadline.

But perhaps the most important provision pertains to the involvement of lay Catholics in the investigation process. These are regular members of the church who are not employed by it, including judges, lawyers, academics and leaders from other walks of life. Unlike bishops, they have little incentive to protect fellow bishops or priests or perpetuate cover-ups. Considering that lay Catholics have demanded a greater role for the laity following recent scandals, this provision is a godsend.

But that provision should also be strictly interpreted by American bishops. The new policy leaves the involvement of lay Catholics to the discretion of the bishop in charge of the investigation. A bishop can "tak[e] into account the cooperation" lay Catholics offer and he is "free to choose … qualified persons" to assist him. While the situation may be different in other countries, in the American church, it makes sense for bishops to engage the laity as much as possible.

This will help restore trust after years of scandal. Recent revelations — especially the decades of sins and crimes committed by ex-cardinal Theodore McCarrick and the likely knowledge of many of his fellow bishops — means that millions of American Catholics lack confidence that the hierarchy can or will clean itself up. By involving lay Catholics in every investigation under Pope Francis' reforms, bishops can help show the laity that they're committed to accountability and transparency.

The bishops can even go a step further and create a national lay commission to support investigations. The U.S. Conference of Catholic Bishops nearly approved such a policy last November, only for the Vatican to ask for a delay while it drafted this new edict. The final reforms don't appear to prohibit such a move, which is a hopeful sign for American Catholics. When the bishops gather in Baltimore in June, they can finally pass this policy and expand on the good work begun by Pope Francis.

Regardless of the form it takes, lay involvement is essential. The Second Vatican Council explicitly called on lay Catholics to take a greater role in the church's governance. Moreover, we already know that lay involvement works.

In the wake of the Boston sex-abuse scandal in the early 2000s, the U.S. bishops' conference ordered every diocese to create local review boards, run primarily by lay Catholics, to investigate accusations against priests and create policies to prevent future abuse. (Bishops were exempted.) This system has helped contribute to the decline in credible allegations of abuse by priests. If lay Catholics can help prevent abuse by normal priests, we can surely hold bishops accountable, as well.

Pope Francis' new policy will expire after a three-year trial period, at which point the Holy Father can renew it — or improve it. By expanding on the pope's praiseworthy action to the maximum possible extent, American bishops can show the tremendous benefits of greater lay involvement and set an example for the global church.

Not only can lay Catholics help prevent abuse and protect the innocent. We can help wipe away the stain of scandal, preserving the church's ability to preach the truth.

[Tim Busch is chairman of the board and co-founder of the Napa Institute, a Catholic lay apostolate that advocates church reform.]