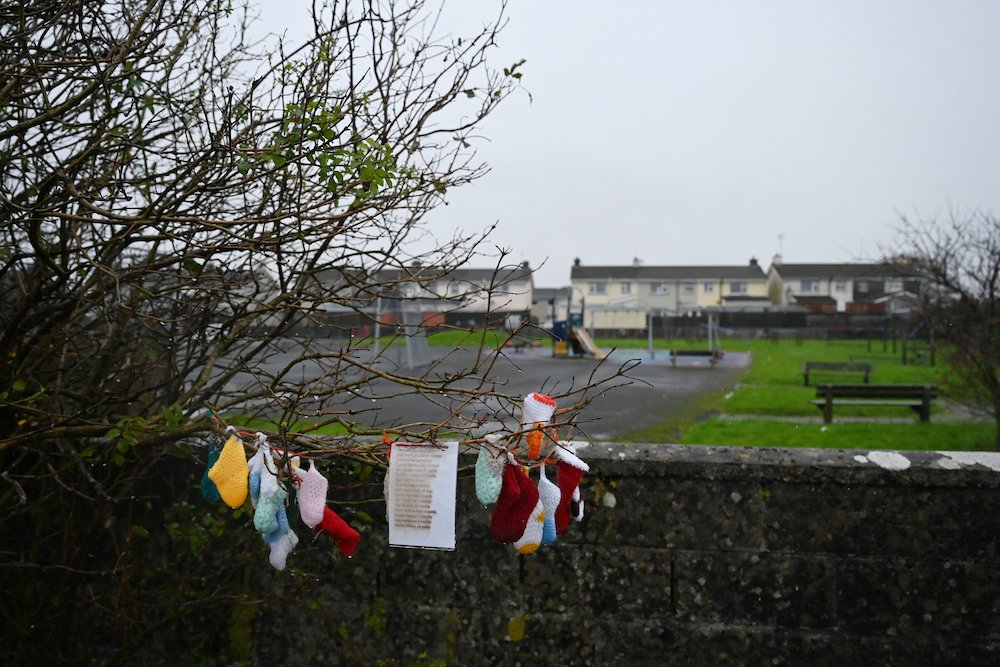 Baby clothing and other items hang from a tree at a cemetery in Tuam, Ireland, where the bodies of nearly 800 infants were uncovered at the site of a former Catholic home for unmarried mothers and their children. The photo was taken Jan. 12, 2021, the day a commission investigating the treatment of women in such homes released its report. On Jan. 26, Northern Ireland's government released a 534-page report on mother and baby homes there. (CNS/Reuters/Clodagh Kilcoyne)

The young mother wrapped her baby son in a shawl and carefully pushed a letter to his adoptive parents into a bag stuffed with toys, sweaters and other clothes.

"I lifted him from the nursery, walked up the corridor and handed him to a nun and that was the last I'd seen of him for 40 years," said Adele, who asked to use a pseudonym because of the sensitive nature of her story.

She said that at the age of 18, she had been "shipped off" to the Good Shepherd Sisters' Marianvale Mother and Baby Home in Newry in Northern Ireland.

What struck her immediately as she walked in was the smell of lavender wood polish. She still associates it with the trauma of having to give up her name, and her baby, and of being made to perform Irish dances for the nuns with a group of pregnant women and girls.

Soon after her baby was born in the nearby Daisy Hill Hospital, they returned to Marianvale — Adele back to her dormitory with other women and girls, some as young as 13, and her baby to the nursery. She was only allowed to feed and change him. "I couldn't even give him a cuddle."

After 40 years, her son made contact and they instantly connected. "It was if we had never been apart," she told NCR.

Mark McCollum was born at the same hospital four years earlier, and he and his mother also returned to Marianvale, which housed some 1,399 women and girls between 1955 and 1984.

At a few weeks old, the infant was taken more than 90 miles to a Sisters of Nazareth adoption home in County Donegal, in the Republic of Ireland. There he was given a new identity.

McCollum and Adele's son were just two of thousands of babies born to more than 14,000 unwed mothers confined in mother and baby institutions and "Magdalene Laundries" in Northern Ireland between 1922 and 1999. While both boys were adopted into good homes, McCollum could never shake the urge that gripped him as a teen to find his birth mother. 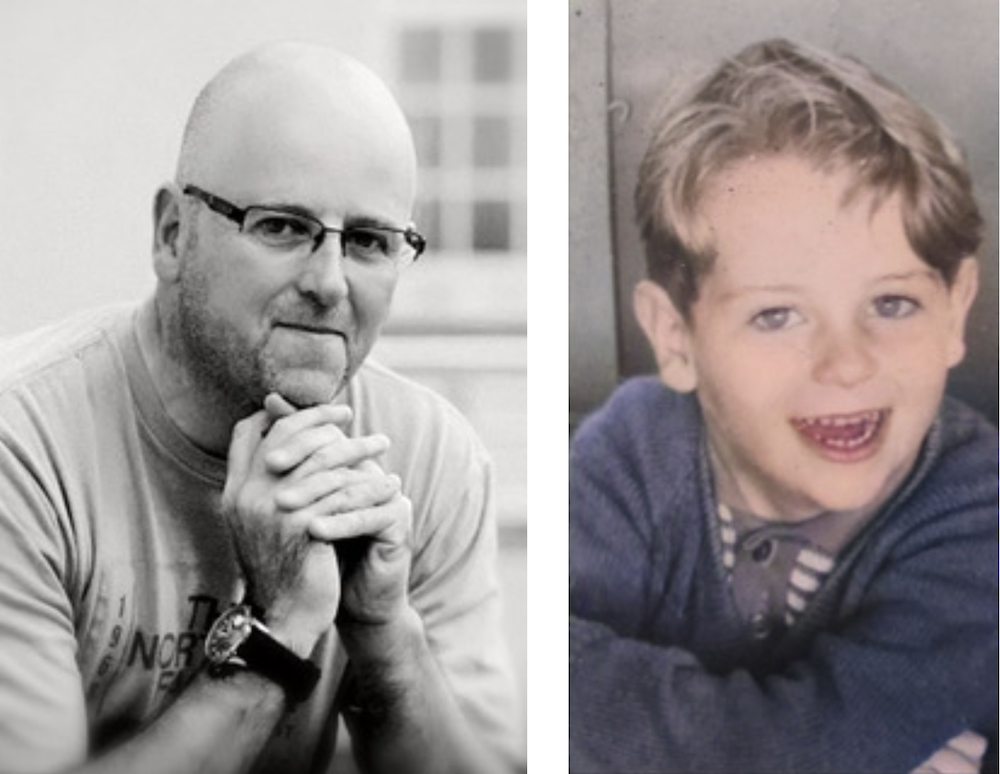 Mark McCollum is pictured in a recent photo, left, and as a young boy, right (Provided photos)

McCollum and Adele were speaking after Northern Ireland's government on Jan. 26 released a 534-page report it had commissioned after years of campaigning by Amnesty International and other groups like Birth Mothers for Justice.

Researchers from Queens University Belfast and Ulster University spent 16 months looking into 14 homes and institutions run by Catholic and Protestant churches as well as the state.

The report highlights the attitude to and the treatment of unmarried mothers from as young as 12 years old, some of whom had been raped and others who had become pregnant after incidents of incest.

The new report in Northern Ireland, which is part of the U.K., comes shortly after the Republic of Ireland recently released the findings of its own commission of inquiry into mother and baby homes.

The earlier report said religious-run homes on the southern part of the island appeared to have "significantly reduced" the prospects of survival for so-called illegitimate children. Police in the Republic have said their report will be studied for instances of criminality like rape, physical abuse, slave labor and cash for babies.

Soon after publication of the new Northern Ireland report, Armagh Archbishop Eamonn Martin, whose see is based in the north but who also is known as the "Primate of All Ireland," issued an apology in the name of the church.

Martin asked for forgiveness and said he felt "embarrassed and guilty over the way in which we in the Church contributed to, and bolstered, that culture of concealment, condemnation, and self-righteousness."

Later, speaking in a BBC radio interview, Derry Bishop Donal McKeown said he was "ashamed" that what the women and girls had endured had not been taken seriously sooner.

The Northern Ireland report further cast doubt on the circumstances of mothers' consent, where it was given, for their babies to be placed for adoption. It reveals that babies, like McCollum, were sent to new homes across the border to the Republic of Ireland, in some cases to England and even to the United States.

Children, some as old as 3, were adopted by couples in New York, Illinois, New Jersey, Massachusetts and Louisiana, the report said.

Without access to original paperwork, researchers said they could not confirm the legality of these adoptions.

McCollum told NCR that he had searched for his birthmother, but found the task difficult as there were no clues to follow. He said he had to clamber over layers of official obstacles in his decades-long search. When he found her, it was too late.

Only six months ago the 54-year-old established that the woman who had given birth to him was Kathleen McGuire, then 22. Sadly, she had passed away several years before he knew who she was.

She had named him Paul Anthony McGuire. "Mark McCollum doesn't have a birth certificate: He was made up by the nuns," he said in an interview.

"It's been a catalogue of disappointment. The whole system is set up to make you give up," said McCollum, who was not told his mother's surname and then was incorrectly told she was from Belfast, driving him to waste time searching there. It turns out she was actually from the city of Derry, 70 miles away 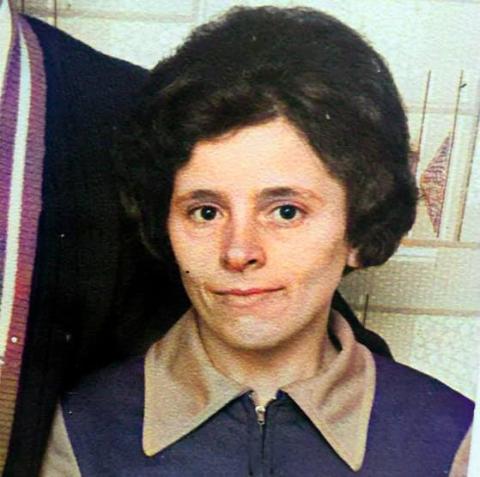 The consistent refrain throughout his quest was that he should be "eternally grateful" that he had been saved, "rehomed like a rescue puppy," he said.

Just last week, he was confronted with the devastating news that members of his birth family had tried to contact him 15 years ago through a social worker. He was not given the information.

Two Good Shepherd Sisters and three retired social workers interviewed for the new Northern Ireland report denied coercing mothers to give up their children, but the report concludes that "many birth mothers had no choice about what happened to their baby."

Researchers and campaigners said the total figure of 1,415 women and girls from the 14 institutions was a conservative estimate and likely "represented only one in four" so-called illegitimate births in Northern Ireland.

They found that those who entered the institutions could not have married because the father was either already married, or his identity was not known or revealed, or he was of a different religion to the mother, or because the pregnancy was the result of rape.

"The available records do not indicate whether the appropriate authorities were always informed about the criminal circumstances of these pregnancies," the report says. "Across the denominations there was a clear condemnation for unmarried mothers."

"It's been a catalogue of disappointment. The whole system is set up to make you give up."
—Mark McCollum

In about half the cases, the women and girls were referred to the institutions by clergy and religious bodies.

Unveiling the report Jan. 26, Northern Ireland's First Minister Arlene Foster announced that the government would institute a survivor-led process to design the method for an official inquiry into their experiences. It was hoped that this would be decided within six months at the latest.

"I'm delighted for the survivors," Patrick Corrigan of Amnesty International, who has spent the last nine years pushing for an independent inquiry in Northern Ireland, told NCR. He was particularly impressed by "the commitment to a proper investigation" and welcomed that it had the unanimous support of all political parties in the Northern Ireland Assembly.

Within 24 hours of the report's publication, Amnesty International and Birth Mothers for Justice announced a meeting for survivors and their close family to discuss the way forward. It is scheduled to be held online in accordance with COVID-19 regulations later this week.

"We are delighted that we've got this far, and that the report has finally come out," Mechelle Dillon, secretary of Birth Mothers for Justice, said in a statement. "It is a huge relief that the truth is finally emerging. However, we still have a long road ahead of us, this is nowhere near finished."

"There needs to be accountability and for Church and State to take full responsibility," she said. This should include "apologies, redress and prosecutions where appropriate."

For McCollum, nothing short of "a proper full robust investigation" will do. "The time has come for real action," he said. "A lot of people, myself included, are getting tired of telling our stories. Sympathy and empathy is wonderful, but we want to see change."

"We have been waiting long enough," said Adele, now 69, who has lived most of life feeling "not good enough." She says a future inquiry "must have teeth. There's not to be any more of this hiding behind a veil of secrecy and shame."

"We need the bright light of truth and justice shone upon this," she said. "The women deserve it."