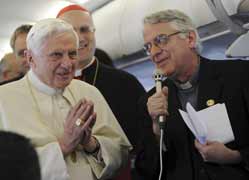 Pope Benedict XVI listens to Jesuit Father Federico Lombardi, the Vatican spokesman, inside a plane en route to Portugal May 11. The pope made some of his strongest remarks to date on the sex abuse cases during an in-flight press conference. Behind the p ope is Cardinal Tarcisio Bertone, Vatican secretary of state. (CNS photo/Stefano Rellandini, Reuters)

In a rare stroke of good news for Rome vis-à-vis the sexual abuse crisis, attorneys for three alleged victims in Kentucky have said they’re dropping what many analysts regarded as the most serious civil lawsuit against the Holy See in American courts.

Louisville-based attorney William McMurry gave two reasons for abandoning the case of O’Bryan v. Holy See, one legal and the other practical.

As a legal matter, McMurry told media outlets in mid-August, the Vatican’s sovereign immunity under American law set the bar too high. More practically, McMurry said, he couldn’t find additional victims willing to come forward who haven’t already been part of a lawsuit against the church. Without more plaintiffs, it’s unlikely that any settlement or verdict would have been sufficient to offset the costs of litigation, even if the lawsuit had prevailed.

The O’Bryan case was originally filed in 2004, and McMurry had hoped to turn it into a class-action suit on behalf of thousands of victims nationwide.

Unlike other suits against the Vatican, which typically charge Rome with direct responsibility for priestly misconduct, the O’Bryan case focused instead on Rome’s relationship with local bishops. It asserted that the bishops are “employees” or “agents” of the Vatican, and hence the Vatican is liable for their negligent supervision of abuser priests.

Since it’s generally considered easier to connect the dots between Rome and the decisions of a diocesan bishop, as opposed to Rome and the behavior of an ordinary priest, many analysts felt the O’Bryan case posed the more significant legal challenge to the Vatican.

Despite dismissal of the Kentucky case, the Vatican still faces a separate lawsuit in Oregon, Doe v. Holy See. The U.S. Supreme Court recently declined to take up the Doe case, in effect allowing it to proceed, and most sources believe there’s little prospect the plaintiff’s lawyers in Oregon will follow McMurry’s lead and drop it.

That’s largely because the lead attorney in the Doe case is Jeffrey Anderson, America’s best-known and most successful litigator against the Catholic church. According to a recent press release from his St. Paul, Minn.-based firm, Anderson has represented more than 2,000 claimants in Catholic abuse cases. That record gives Anderson both the resources and the personal commitment to stay the course, sources say.

The next step in Oregon is likely to be wrangling over discovery, meaning whether lawyers for the plaintiff will be allowed to demand disclosure of documents from the Vatican and to take testimony under oath from Vatican officials. Anderson recently told Italian newspapers that he intends to go to Rome to depose not only senior Vatican personnel such as the Cardinal Secretary of State Tarcisio Bertone but also Pope Benedict XVI himself.

“This development confirms that there has never been a Holy See policy requiring concealment of child sexual abuse,” Lena said in an August 9 statement. “Bringing this case only distracted from the important goal of protecting children from harm.”

Likewise, Vatican spokesman Jesuit Fr. Federico Lombardi said Aug. 10, “It is good news that a case … which has had strong negative effects on public opinion has ultimately been proven unfounded.”

In comments to Vatican Radio, Lombardi added that he didn’t mean to “minimize the horror and condemnation” of child sex abuse, or the compassion due to victims.

Ironically, the O’Bryan case could actually turn out to be more memorable for Catholic theology than for American civil law.

As part of the proceedings, Lena filed two lengthy memoranda from canonist Edward Peters of Sacred Heart Seminary in Detroit, forcefully defending the autonomy of the local bishop. To assert that bishops are no more than Vatican employees, Peters wrote, is “contrary to basic principles underlying the structure of the church.”

Since these memos were filed on behalf of the Holy See, they arguably carry a semi-official status as expressions of Vatican policy. The nature of the relationship between the papacy and the bishops has long been a hotly debated point, which suggests that these documents may be pondered in theological circles long after attorneys have forgotten about the abandoned lawsuit which prompted them.