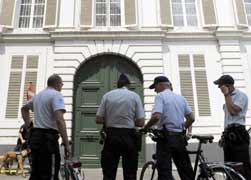 Police officers stand outside the residence of the archbishop of Mechelen-Brussels in Mechelen, Belgium, June 24. (CNS/Reuters)

BRUSSELS, BELGIUM — In two surprise moves Aug. 13, the Brussels attorney general’s office declared that the June 24 police raid on the offices of the Catholic archbishop in Mechelen were unlawful and that any evidence that may have been unearthed during the raid is inadmissible in court. The same day, the Brussels court of prosecution issued a judgment that all confiscated documents and computers had to be returned.

The attorney general's declaration and decision of the court were made public not by the court but by Fernand Keuleneer, a lawyer representing the Archdiocese of Brussels-Mechelen and Cardinal Godfried Danneels, the retired archbishop.

However, the court of prosecution also ruled that investigations into allegations of the sexual abuse of children by clergy could continue for cases that came to light after police seized documents and computers in June.

The latest legal moves took victims of sexual abuse by surprise, and an attorney for victims said his clients will appeal the matter to the European Court of Human Rights.

In June, under the code name "Operation Chalice," 50 agents from the Brussels federal police stormed the archbishop's residence and offices of the Archdiocese of Brussels-Mechelen, as the Belgian bishops began their regular monthly meeting. The bishops and their staff were detained nine hours for questioning.

In addition two truck-loads of documents and computers were taken from diocesan offices as well as from the private residence of the former archbishop, Cardinal Danneels.

The federal investigators were searching for evidence that the church had systematically concealed documents as part of an ecclesiastical cover-up of clerical sexual abuse.

Police examiners also moved down the street to the cathedral of Mechelen where they inserted small surgical-type cameras into the tombs of a couple former archbishops to determine if any documents were concealed there.

Investigators also went to the city of Leuven, headquarters for the church-appointed Interdiocesan Commission on Sexual Abuse, chaired by Catholic University of Leuven professor and child psychologist Peter Adriaenssens. There documentation about 475 victims of sexual abuse was confiscated. The legality of this raid is now open to questioning, legal experts and a retired circuit judge told NCR.

Police had yet to reveal what if any evidence they discovered in the raids.

Lawyers representing the victims of sexual abuse, as well as some members of the now disbanded Interdiocesan Commission on Sexual Abuse are outraged. The commission disbanded after police confiscated their files

Walter Vansteenbrugge, a Belgium lawyer who represents 25 victims of clerical sexual abuse, said he is furious about the latest developments and is determined to take the matter to the European Court of Human Rights in Strasbourg.

In an interview in De Standaard Aug. 14, Vansteenbrugge said: “This is the peak of arrogance. … The victims of abuse are held waiting at the door and their access to a judge is denied.”

“My clients,” he continued, “have great anxiety about what will now happen to their cases but they are at the same time more than ready for the fight. They will not accept this. And a lot of things will soon float to the surface. The flood gates are now wide open!”

Court throws out Milwaukee abuse claim because of previous settlement

No, Jean Vanier is not 'like all of us'