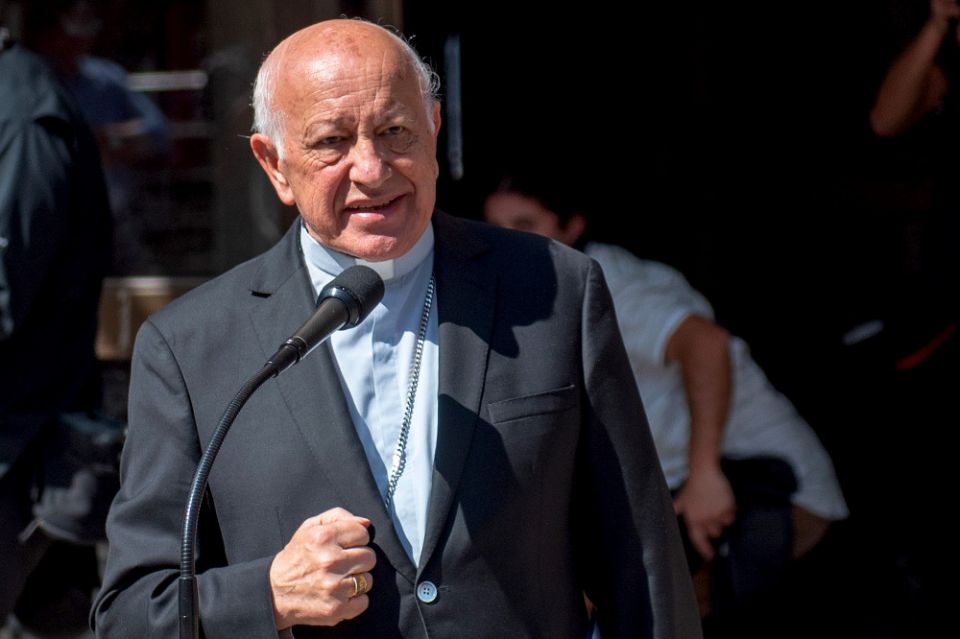 Chilean Cardinal Ricardo Ezzati meets the press in Santiago March 23, 2019, after the Vatican announced Pope Francis had accepted his resignation. The archbishop, 77, has been involved in the ongoing investigation of clerical sexual abuse and its cover-up by church authorities. (CNS/courtesy of Archdiocese of Santiago)

Vatican City — Pope Francis has accepted the resignation of a Chilean cardinal who has faced widespread criticism for his handling of cases of clerical sexual abuse in the country.

The pope accepted the resignation of Cardinal Ricardo Ezzati of Santiago, the Vatican announced March 23; the Vatican did not give a reason for the cardinal stepping down. All bishops are required to offer their resignations when they turn 75; Ezzati is 77.

The cardinal's is the eighth resignation Pope Francis accepted after almost every bishop in Chile offered to step down in May 2018 after a three-day meeting at the Vatican to discuss the clerical sexual abuse scandal. In each case where he accepted a resignation, the pope named an apostolic administrator to lead the diocese temporarily. For the administrator of Santiago, the pope chose Bishop Celestino Aos Braco of Copiapo, who will turn 74 April 6.

Chile has 27 dioceses and other church jurisdictions led by a bishop.

The announcement of the cardinal's resignation comes just over a week after a Chilean news outlet published a 2015 criminal complaint made against Ezzati and the Archdiocese of Santiago that revealed a case of sexual abuse that occurred in the cathedral of Santiago and its subsequent cover-up.

Chilean prosecutors also are investigating an alleged sex-abuse ring in Rancagua as well as possible cover-ups of abuse cases in Santiago by senior members of the clergy, including Ezzati and his predecessor, Cardinal Francisco Javier Errázuriz.

Ezzati was subpoenaed in July 2018 after prosecutors conducted several raids of diocesan offices in Rancagua and Santiago.

Although Ezzati had said that he would cooperate with authorities in their investigation, he invoked his right against self-incrimination when he appeared in court in October.

Responding to reporters' questions March 23, the cardinal said he will speak "at the appropriate time" and is consulting with his lawyers to make that happen. However, he also said, he leaves the archdiocese with "my head held high, sure that my innocence will be proven" and that people will recognize how much he has done to respond to abuse allegations.

Aos, celebrating Mass in the Santiago cathedral March 24, acknowledged how destructive the crime of abuse has been for the victims and for the whole church.

However, he said, "we are called not to get stuck brooding over the desolation, falling into doubt, fear and mistrust; we are called to move from being a church of the dejected, desolate, to a church that serves the many downtrodden who live alongside us."

"In a special way," the bishop said, "we will attend to and serve those who suffer the abuse of their dignity" as a result of the "absolutely unjustifiable and absolutely intolerable" crime of sexual abuse by clergy. Superficial changes "are not enough; we need reforms and profound changes, changes that start from the heart of each one of us who has to seek truth and justice."

Survivors of abuse have been critical of Ezzati and the country's bishops not only for mishandling cases of abuse, but also for allegedly misinforming the pope about the reality of sexual abuse in the country.

Among the cardinal's most vocal critics is Juan Carlos Cruz, who along with fellow survivors José Andrés Murillo and James Hamilton, were invited to meet with the pope last April at the Vatican.

Speaking to journalists May 2, Cruz said he told the pope how he was demonized by Ezzati and Errázuriz in an email that was later leaked.

"They called me a 'serpent,' they called me everything. I told the Holy Father, and he said he was hurt," Cruz said.

In a message to Catholic News Service March 23, Cruz applauded the pope's decision to accept the cardinal's resignation saying that "the pope knows what he is doing" and expressing hope that the pope would "find someone who will lead Santiago on the right path."

Cruz also expressed his support of Aos in the difficult task of leading the archdiocese back "to what is true, to its source."

A version of this story appeared in the April 5-18, 2019 print issue under the headline: Pope accepts resignation of embattled Chilean cardinal .

At eucharistic congress, English cardinal prays for pardon for bishops

Your thoughts on accused clergy

Your thoughts on dismantling clericalism