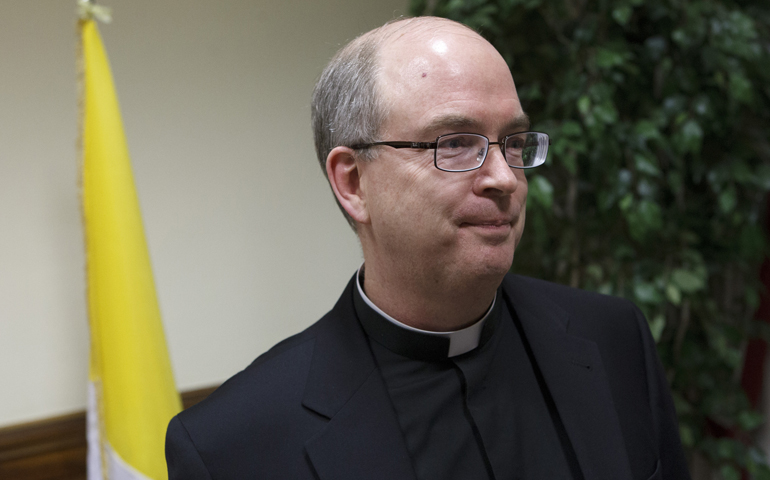 Pope Francis appointed two U.S. priests to top positions at the Vatican for dealing with the sexual abuse of minors.

The pope named U.S. Fr. Robert Oliver to be the new secretary of the Pontifical Commission for the Protection of Minors, and appointed Jesuit Fr. Robert Geisinger to replace Oliver as the promoter of justice at the Congregation for the Doctrine of the Faith -- the Vatican's chief prosecutor of sex abuse crimes.

The Vatican made the announcement Wednesday.

Oliver fills a new full-time position of secretary for the pontifical commission, which Pope Francis established in December.

A Vatican source told Catholic News Service there would be another announcement "soon" of more new members to be added to the commission, as it aims to expand the number of representatives from around the world, especially from Africa and Asia.

The commission, which currently has eight members, including a survivor of clerical sexual abuse, mental health professionals and experts in civil and church law, is tasked with laying out a pastoral approach to helping victims and preventing abuse.

The pope has said he wants the commission to help the church develop better policies and procedures for protecting minors.

Oliver, a Boston priest and canon lawyer, worked on the abuse crisis in the church in his home archdiocese and at the Vatican as the promoter of justice since his appointment there in February 2013.

As secretary of the Vatican commission on protecting minors, the priest again will be assisting Cardinal Sean O'Malley of Boston, the head of the commission.

Before he was appointed to the Vatican, Oliver had served as a judge and promoter of justice in Boston tribunals and as a consultant to the Boston archdiocesan review board, a body that advises O'Malley in assessing accusations of child sexual abuse by members of the clergy and in determining the suitability of an accused priest for ministry.

Born in New York in 1960, he was ordained to the priesthood for the Boston archdiocese in 2000 and is a member of the Brotherhood of Hope. He earned his doctorate in canon law from The Catholic University of America and a doctorate in theology from the Pontifical Gregorian University in Rome. He has served as a judge, taught, developed policy and offered counsel as a canonical adviser.

Geisinger will replace Oliver as promoter of justice in the doctrinal congregation -- a position similar to a prosecuting attorney in a civil court. The position also involves monitoring the procedures that national bishops' conferences have in place for dealing with abuse accusations and handling the dismissal from the priesthood of those guilty of sexual abuse.

A member of the Chicago-Detroit Province, the Jesuit priest has been serving in Rome since 2001 as general procurator for the Society of Jesus -- the chief in-house canonical adviser to the Jesuit superior general in Rome.

Born in Parma, Ohio, in 1958, Geisinger received degrees in English literature, philosophy, canon law and a master of divinity degree.

He has a background in teaching and he worked as associate chancellor of the Chicago archdiocese and as a presiding judge on the archdiocese's metropolitan tribunal.

He also once worked as a news director of a radio station in Nome, Alaska, before he entered the Society of Jesus in 1981. In the 1970s, he worked as an assistant manager of Chicago's Granada Theater.