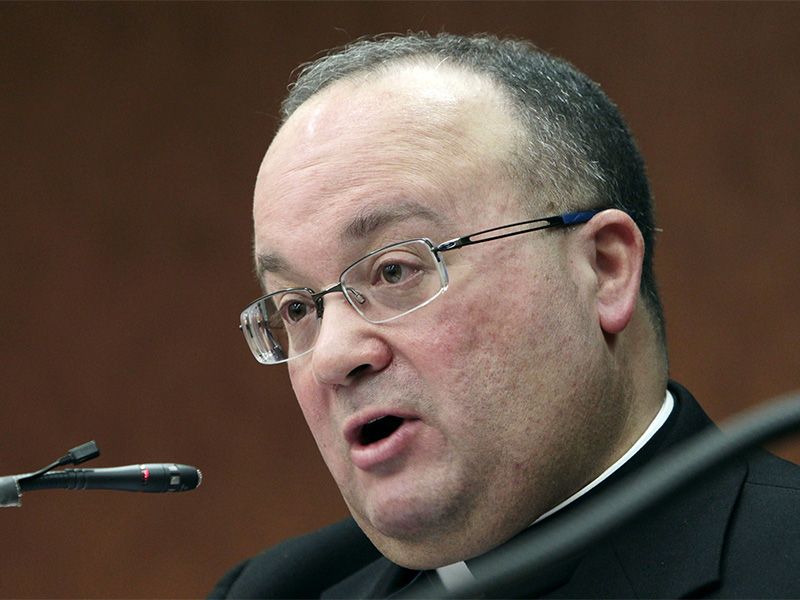 Pope Francis is sending Archbishop Charles Scicluna of Malta to Chile to take testimony about Bishop Juan de la Cruz Barros Madrid of Osorno, Chile, who is accused of covering up allegations of abuse by a Chilean priest who was found guilty of abuse.

The Vatican announced Scicluna's trip to Chile in a statement this morning.

Scicluna was in charge of sexual abuse cases in the Congregation of the Doctrine of Faith from 2002 until 2010. Francis appointed him to lead a commission in the doctrinal congregation  to hear appeals of priests accused of sexual abuse.

"Following recently received information regarding the case of H.E. Msgr. Juan de la Cruz Barros Madrid, Bishop of Osorno (Chile), the Holy Father Francis has arranged for H.E. Msgr. Charles J. Scicluna, Archbishop of Malta and President of the College for the examination of appeals (in matters of delicta graviora) at the Ordinary Session of the Congregation for the Doctrine of the Faith, to go to Santiago de Chile to hear those who have expressed their willingness to submit elements in their possession," the Vatican press office statement read.

Barros has been at a center of controversy since his appointment to Osorno, a small diocese in southern Chile in 2015, because of his association with Fr. Fernando Karadima, who in 2011 was ordered by the Vatican to "retire to a life of prayer and penitence" for sexually abusing minors. For decades before that Karadima, now 87, had been a charismatic and highly influential cleric in Chile counting bishops and priests among his disciples, including Barros.

In 2010 three Chilean men — Juan Carlos Cruz, James Hamilton and José Andres Murillo — went public with accusations that Karadima had abused them decades before when they were teenagers. They would learn that allegations of abuse had been leveled against Karadima as far back as the 1980s, but nothing had ever come of them.

Chilean prosecutors opened a case against Karadima in 2010 and at least four other men came forward with similar accusations. The case was eventually dropped because the statute of limitations had expired, but a judge stressed there wasn't a lack of proof.

The victims of Karadima’s abuse have testified in court and in letters sent to church officials that Barros and other church officials — including bishops Andrés Arteaga, an auxiliary in Santiago, Tomislav Koljatic of Linares, Chile, and Horacio Valenzuela of Talca, Chile — knew of the abuse and covered it up.

Cruz told NCR Jan. 23 that while "the bigger abuse was behind closed doors," Barros was in the room when Karadima touched the genitals and put his tongue in the mouth of Cruz and other victims.

Barros and the other bishops have steadfastly denied they knew about the abuse before 2010. Barros and Valenzuela denied the accusations most recently in an interview with Crux, in a story published Jan. 17.

The controversy overshadowed Francis’ recent trip to Chile during which he strongly defended Barros, insisting there is no evidence that Barros ignored or covered up sexual abuse by Karadima.

Francis went so far as saying on two occasions that accusations against Barros were “calumny.”

For those remarks, Francis came under heavy criticism including from NCR.

Scicluna, 58, earned the sobriquet “chief prosecutor of clerical sex abuse cases” from his time at the Congregation of Doctrine of the Faith. Appointed to that role by then-Cardinal Joseph Ratzinger, now Pope Emeritus Benedict XVI, is widely seen as the architect of the more aggressive approach to the clergy abuse crisis that emerged in after 2001.

This is at least the second time that Francis has tapped Scicluna to deal with a high profile case. In April 2014, he dispatched Scicluna to Scotland to collect testimony in a case against Cardinal Keith O'Brien, the former archbishop of St. Andrews and Edinburgh, who resigned in 2013 after admitting to sexual misconduct.

O'Brien resigned abruptly just days before the 2013 conclave that elected Francis pope, following allegations by three priests and one former priest of the Scottish archdiocese that the cardinal had inappropriate sexual relations with them dating back some 30 years.

In May 2015, the Vatican announced that O'Brien, "in dialogue with the Holy Father," renounced all "duties and privileges" associated with being a cardinal, including by serving as a papal adviser, a member of Vatican congregations and councils, and as an elector of a new pope. He was 77 at that time. He has lived privately since, with no participation in any public, religious or civil events.

Shortly after Benedict was elected pope in 2005, he sent then-Msgr. Scicluna to investigate allegations about abuse committed by Fr. Marcial Maciel Degollado, founder of the Legionaries of Christ. Allegations against Maciel had been accumlated for decades, but as head of the wealthy and well-connected Legionaries, the accusations had gone no where. Several months after Scicluna began the investigation, Benedict ordered Maciel to "a life reserved to prayer and penance, renouncing any public ministry."

At the time, Legion officials defended Maciel's declaration of innocence and compared him to Christ for his suffering. Maciel died in January 2008 at age 87. In 2010, leaders of the order for the first time publicly acknowledged their founder had sexually abused young seminarians. They also revealed that Maciel had father several children with two women. They asked forgiveness for failing to listen to his accusers.

When the innocence of children is “trampled upon, broken, sullied, abused, and destroyed,” then “the earth becomes arid and the whole world sad,” Scicluna said in May 2010 at prayer service for reparation for abuse committed by priests and for healing within the church. The service was organized by students at Rome’s pontifical colleges and took place in St. Peter’s Basilica at the Altar of the Chair of Peter.

“How many sins in the church [have happened] because of arrogance, insatiable ambition, abuse of power and injustices committed by those who abuse their ministry to advance their career?” Scicluna asked.

He denounced the “futile and wretched motives of vainglory.”

The remedy to such scandals offered by God as the “Divine Surgeon,” according to Scicluna, is to “cut out [disease] in order to heal,” and to “amputate in order to restore health.”

This is a breaking news story. Watch this page for updates.

Past members of sex abuse commissions tell of struggles with bishops