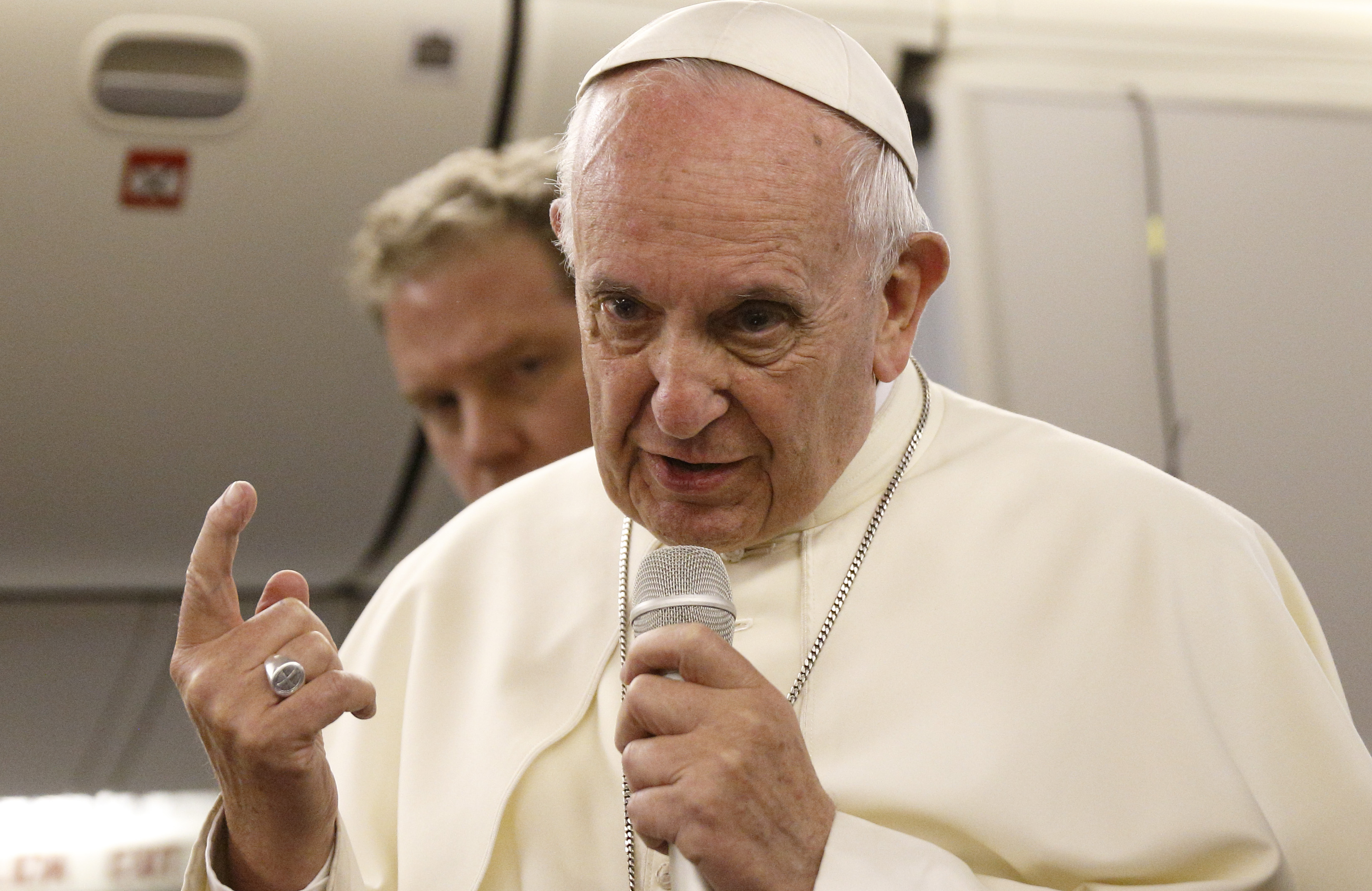 ABOARD THE PAPAL FLIGHT FROM PERU -- Pope Francis has again firmly defended his appointment of a Chilean bishop accused of covering up clergy sexual abuse, renewing a claim that accounts against the prelate are "calumny," a claim that survivor advocates say has brought the Catholic Church back to the bleakest point of the abuse crisis.

While the pontiff did apologize for causing survivors pain with an earlier defense of Bishop Juan Barros Madrid, he also repeatedly insisted during a 50-minute press conference aboard the papal flight to Rome overnight Jan. 21 that there was no evidence against the prelate, despite survivors' accounts to the contrary.

Asked by three separate journalists why he appeared ready to believe Barros but not the abuse survivors, the pope repeated iterations of the phrase "there is no evidence." And although Francis said he would accept any new evidence brought forward with an "open heart," he also stated: "I am convinced he is innocent."

"This is what I can say to you with sincerity: Barros will remain there," the pope said. "I cannot condemn him if I do not have the evidence."

Francis first called the accusations against Barros calumny Jan. 18, when reporters questioned him about his appointment of the bishop during the first part of his Jan. 15-21 visit to Chile and Peru.

That charge led abuse tracking website BishopAccountability.org to say the pope had "turned back the clock to the darkest days" of the abuse scandals, and that it would make victims afraid to come forward for fear of not being believed.

Boston Cardinal Seán O'Malley, one of the pontiff's closest advisors, also issued an unusually blunt statement in response to the pope's words, saying they had been "a source of great pain" for survivors.

The pope repeated the slander charge again on the papal flight, stating: "One who says with insistence, without having the evidence, that you have done something, that is calumny."

Asked by a journalist about survivors who claim that, as a priest in the 1980s and '90s, Barros was a witness to inappropriate behavior by Fr. Fernando Karadima, Francis responded: "They have not come forward. They have not given evidence for the judgment."

"You, with good will, tell me there are victims," the pope told the journalist. "But I have not seen them because they have not presented themselves."

"But if someone comes to give me evidence, I will be the first to listen," he continued. "We have to be fair in this, very fair."

At least three of Karadima's victims have said publicly that Barros was present to witness the priest abusing or touching them in inappropriate ways. After Francis made his original defense of Barros Jan. 18, one of those victims, José Andrés Murillo, told NCR he was left wondering why the pope has met with Barros but not them.

Francis also revealed on the flight that Barros, who was serving as the head of Chile's military ordinariate before the pope appointed him to the small diocese of Osorno in 2015, has twice offered his resignation. The pontiff said the bishop offered to resign both shortly before and shortly after his latest appointment.

Of the first offer, the pope said: "He came to Rome. I said, 'No, you do not play like this because this is admitting anticipated guilt.' Every case ... is investigated. I refused the resignation."

"The investigation of Barros continues," said the pontiff. "I cannot condemn him because I do not have the evidence. But I am also convinced he is innocent."

"This is what I can say to you with sincerity: Barros will remain there," the pope said. "I cannot condemn him if I do not have the evidence."

Barros' appointment was met with large protests in Osorno, where large numbers of people crowded the local cathedral during his installation Mass, attempting to prevent him from formally taking up his role.

Although Francis has been praised in his nearly five year papacy for some of his actions to address clergy sexual abuse, especially his repeated declarations of zero tolerance for abusers, others have left survivors and advocates questioning if the issue is receiving the highest priority at the Vatican.

In one example, in 2015 the pope attempted to institute a new church tribunal specifically charged with investigating bishops suspected of mishandling abuse cases. That tribunal never came into function, with the pontiff instead later directing several separate Vatican offices to take on the work.

Questions about Barros dominated the press conference, with three of the eight allowed queries focusing on the issue. The remaining questions focused on diverse aspects of the pope's trip abroad and did not touch other international or church subjects, following the Vatican's insistence that the pontiff wished to primarily talk about his voyage.

Francis acknowledged that his Jan. 18 defense of Barros had caused pain for abuse survivors, and said he wished to thank O'Malley for his statement, which he called "very right."

The pope made a distinction between seeking evidence and seeking proof of Barros' guilt, stating he erred in originally saying he had not seen proof against the bishop instead of saying evidence.

"I should have said evidence," said the pontiff. "I know that many abused people cannot bring forward proof. They don't have it. Or maybe sometimes they have it and they are ashamed and they suffer in silence. The drama of those who were abused is tremendous."

"With this, I have to say I apologize, because the word proof hurt," said Francis, imagining an abuse survivor asking: "But do I have to go search for a certificate for this?'

"It was a translated word from the legal principle and it hurt, and I apologize to them if it hurt without realizing it," said the pope. "I know how much they suffer, hearing that the pope says in their face 'bring me a letter with the proof' is a slap."

Another example survivors and advocates have pointed at to question whether clergy sexual abuse is taking the highest priority in Francis' papacy is the case of the Pontifical Commission for the Protection of Minors, which is led by O'Malley.

Francis created the group, the first of its kind, in 2014 to advise him on abuse issues. But since the original three-year terms of its members expired Dec. 17, neither the pope nor the Vatican had previously made clear whether the group was continuing, either with its current membership or an eventual new slate of appointees.

On the flight, the pope acknowledged that the terms of the group's members had expired. He said he had received Jan. 9 a "definitive list" of names of possible new members of the commission and of current members who would like to stay in their roles.

Francis called the time-delay on the appointments "normal" within the processes of the Vatican bureaucracy and said there were "two observations" about the proposed list of members he wanted to get clarity on before announcing the new commission.

It is known that two of the original members of the commission, both abuse survivors, will not be continuing on.

Briton Peter Saunders was placed on leave from the group in 2016, after commenting publicly on several clergy abuse cases, including that of Barros, and has since resigned. Irishwoman Marie Collins left last March, citing frustration with Vatican officials' reluctance to put in place the commission's recommendations.