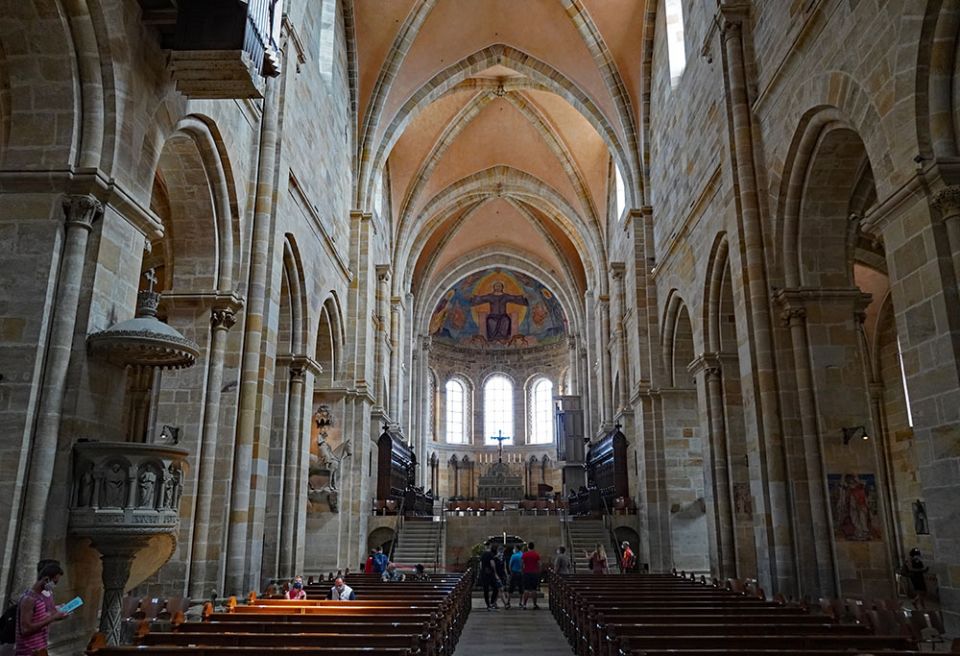 The interior of Bamberg Cathedral in Germany (Wikimedia Commons/Allie_Caulfield)

The priest takes out the parish registry and turns to the section marked "Kirchenaustritt", a procedure to have one's name struck from the baptismal rolls.

It indicates that 32 parishioners left the Church in 2019. And it shows that 21 others have already done so this year.

"I myself thought of leaving the Church," Wolf says, nonchalantly.

"But I stayed. Partly to look after my parishioners."

Bamberg, which dates back to the 9th century, has long been Catholic and conservative. Considered one of Germany's most beautiful towns, it was named a UNESCO World Heritage Site in 1993.

Bamberg Cathedral, named for St. Peter and St George, stands on a cobblestone hill overlooking the half-timbered houses of the medieval old town.

Beer lovers and university students quench their thirst in one of the 60 breweries in this city of 77,000 inhabitants.

Like everywhere else in Germany, this thousand-year-old diocese where Catholics and Protestants live side by side has not yet recovered from the shock suffered three years ago.

In September 2018, the so-called MHG study appeared, revealing the extent of sexual abuse in the Catholic Church in Germany.

Trying to survive the crisis

In the wake of this, the country's bishops, led by the ebullient Cardinal Reinhard Marx of Munich, launched the so-called Synodal Path (der Synodaler Weg).

It has just begun its third and penultimate phase this week.

Since January 2020, its participants have been discussing the future of the German Catholic Church through four themes: distribution of power, the place of women, priesthood today and sexual morality.

But the Synodal Path has aroused concern among Catholics outside of Germany and particularly at the Vatican.

La Croix spoke with numerous people in Bamberg to get a better understanding of what's at stake.

In this quiet Bavarian archdiocese, most Catholics seem to be in favor of this reflection on the Church. 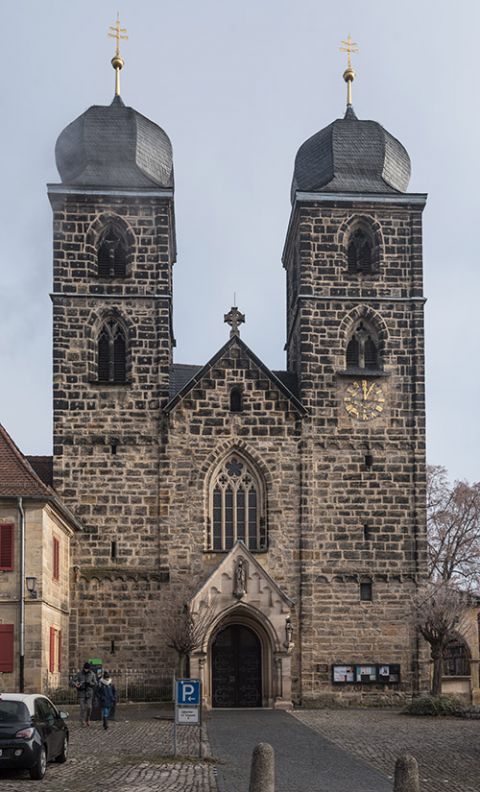 They are motivated by the urgency of re-establishing trust between the Church and its people, deeply damaged by the abuse scandal.

The primary goal is survival.

Shortly after the MHG study was released in 2019, Bamberg Archdiocese recorded a 50% increase in "Kirchenaustritt".

And more and more practicing Catholics have begun to join those planning to leave the Church.

'Reflecting on the system that has allowed the abuse'

In Erlangen, 40 kilometers south of Bamberg, the energetic Klaus Koschinsky still hopes that the Church in Germany will recover from this crisis.

He's the president of the parish council of Sacred Heart Parish and — together with two bishops, a priest and another layman — is part of the Archdiocese of Bamberg's delegation at the Synodal Path.

Koschinsky is a committed Catholic and says he's deeply hurt by the abuse crisis.

He too considered leaving the Church, but decided to stay in order to help change the institution from within.

"The Synodal Path is not about revolution, but about reflecting on the system that has allowed the abuse and protected the perpetrators. We need to identify the causes and make sure it doesn't happen again," he explains.

Koschinsky says there's a deep crisis of confidence in the Church.

In a region where every Catholic pays the obligatory tax to the Church every month, being a believer is expensive.

"How can you give 8% of your income and place trust in an institution that has allowed and protected these horrors?" he asks.

This crisis of confidence is only made worse by the priest shortage, especially in a country where the Catholic Church operates many educational and health facilities.

Christoph Uttenreuther, a parish priest in the town of Hallstadt just north Bamberg is also a diocesan representative at the Synodal Path.

In addition to his parish, he is also responsible for five nursery schools.

Over the years, he has felt his ties to the laity weaken.

"The priests are so busy that they no longer have direct contact with the faithful," he quickly confides, before getting into his car to go celebrate a funeral.

It was in this context that in March 2021 German Catholics received the note from the Congregation for the Doctrine of the Faith on the banning of blessings for homosexual couples.

A number of German priests protested by organizing blessings for same-sex partners.

And some parishes in the Archdiocese of Bamberg now display rainbow flags.

Although he has his own reservations about such blessings, "which could be confused with Christian marriage", Auxiliary Bishop Herwig Gössl of Bamberg says he is sorry the CDF note was published in this context.

Throughout Germany, especially in this archdiocese where Catholics and Protestants each make up 30% of the population, the proximity of the churches of the Reformation colors the thinking of Catholics.

"When you have two churches side by side, you can't help but wonder why women can officiate in one and not in the other," observes Astrid Franssen, a member of the Synodal Path.

Delegate for gender equality for the Archdiocese of Bamberg, she encourages the presence of women in decision-making positions in the diocese — but without sacramental duties.

Like Father Uttenreuther, she is open to the idea of seeing women baptize, preach or marry the faithful.

Many foreign observers fear Germany is heading towards a schism with Rome, especially after the pope sent a letter to the country's Catholics in June 2019 urging them to focus more on evangelization.

Then in November 2020, the pope alluded to Catholics involved in the Synodal Path who "do not listen enough to the Holy Spirit".

"No one in the Synodal Path wants a schism," Bishop Gössl assures. "We want to restore dialogue."

In fact, many Catholics believe the schism has already occurred.

The conservative movement Maria 1.0, which was founded in May 2019 and brings together about 3,000 women throughout Germany, does not hide its concerns.

"The Church cannot be changed with a snap of the fingers," insists its president Clara Steinbrecher, a student from Eichstätt, a suffragan diocese of Bamberg Archdiocese.

"The political agenda of the left-wing Catholics is being imposed under the guise of solving the abuse crisis. For us, the German Synodal Path is on the wrong track and is not a model for the synodal process of the universal Church," she warns.

Despite the dissension, Koschinsky wants to believe that dialogue is possible within the Synodal Path.

"Around the table there are progressives and conservatives, and in the middle there are abuses. Beyond our differences of opinion, the question is: what do we do now?" the priest says.

Conservatives seem to be in the minority in Bamberg Archdiocese. They are discreet and few in number in the parishes.

"On a national scale, they make a lot of noise, but they are less numerous than they seem," says Christian Bauer, a Bavarian native who teaches practical theology at the University of Innsbruck in Austria.

He says there is a "tribalization of the conservative minority, which tends, in reaction, to harden its positions and refuse to compromise".

From the outside, the process gives the image of a German Church in turmoil. But on the ground, many are even more pessimistic.

Father Wolf is having trouble giving his parishioners hope.

"They fear that Rome will reject the reform proposals of the Church in Germany. Many were disappointed by the failure of the synod on the Amazon," the priest says.

An inspiration for the Synod and the universal Church

Stefan Hofknecht, head of the Catholic Youth Association in Bamberg Archdiocese, has been devastated by the abuse crisis.

His own parents are considering leaving the Church.

At home, the debates are heated ... which again makes him question his place in the institution.

"These scandals have bruised the Church, but they have forced us to become more involved as lay people," Hofknecht says.

Ultimately, many hope that the German Church will serve as an inspiration for the preparatory phase of the Synod of Bishops' assembly on synodality, which the pope will launch on October 10.

Bauer wants to see the Synodal Path as a process of inner renewal.

"Before evangelizing outwardly, the Church in Germany must evangelize itself and learn to be a creative minority," he says.