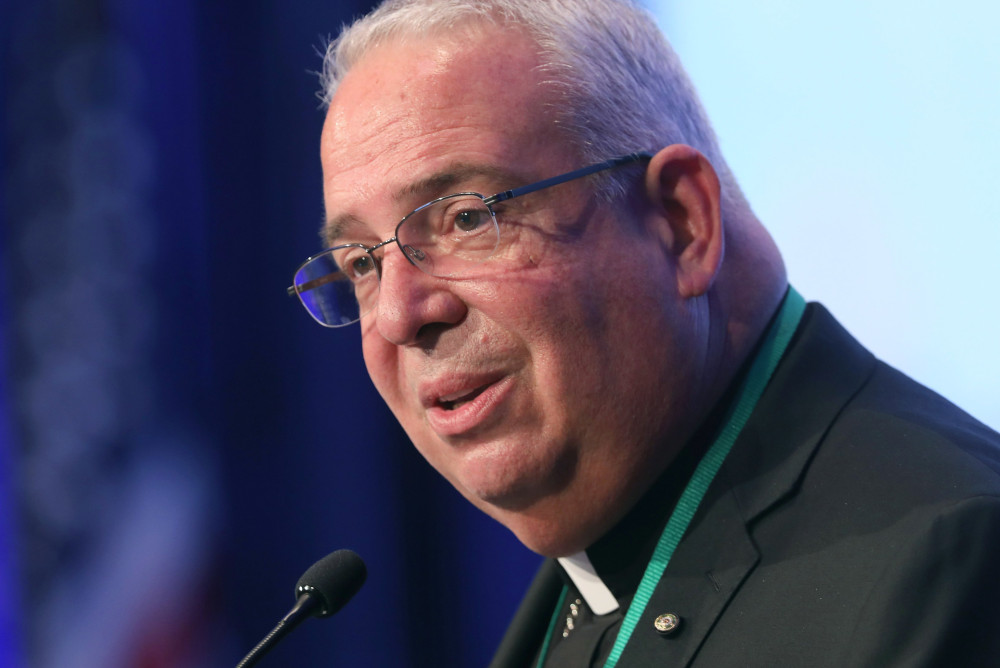 Philadelphia Archbishop Nelson Pérez, chairman of the Committee on Cultural Diversity in the Church, speaks during a Nov. 17, 2021, session of the fall general assembly of the U.S. Conference of Catholic Bishops in Baltimore. (CNS/Bob Roller)

The Philadelphia Archdiocese has paid close to $78.5 million of a total of more than $81 million awarded to 438 victims of sexual abuse by archdiocesan clergy under the Independent Reconciliation and Reparations Program, which released its final report June 2.

The program was begun by the archdiocese three and a half years ago as a way of offering monetary compensation to victims of past abuse but which would be run independent of archdiocesan influence.

The IRRP was administered by Kenneth Feinberg and Camille Biros, a team that has run similar programs in multiple U.S. dioceses. These include the archdioceses of New York, Los Angeles and Newark, New Jersey, and in Pennsylvania, the dioceses of Pittsburgh, Erie, Scranton, Harrisburg and Allentown.

Abuse victims were invited to submit claims for compensation to the committee, whose administrators solely determined whether or not to award money, and in what amount.

In a letter June 2, Archbishop Nelson Pérez of Philadelphia said he was "deeply sorry for the profound pain those victims endured. While we cannot undo the past, we can ensure that our response to the scourge of child sexual abuse is comprehensive, far-reaching and permanent."

He cited the Philadelphia Archdiocese's "long-standing commitment to preventing child abuse, protecting the young people entrusted to its care and providing support for those who suffered sexual abuse at the hands of our clergy."

The archdiocese developed policies for prevention of abuse and victims' assistance in 2002, and has since updated them continuously, available on its website, AOPPledgetoProtect.com.

The reparations program is the latest initiative to aid the process of healing for victims of sexual abuse by archdiocesan clergy.

From its inception in November 2018 until the program closed 10 months later in September 2019, 812 people came forward and 623 formally submitted a claim.

All the claimants had to have reported an abuse incident to law enforcement at some time.

Those who accept the compensation waive the right to sue against past and future claims, though they may discuss allegations of abuse and their personal journey publicly if they wish. 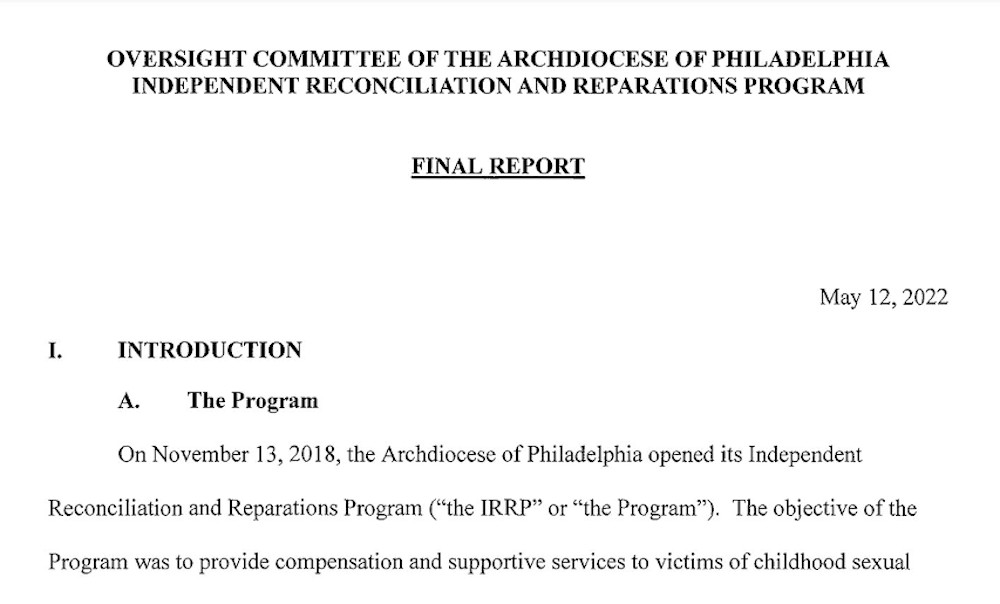 This is the front page of a final report released June 2 by the Independent Reconciliation and Reparations Program in the Philadelphia Archdiocese. The report said that under the program, the archdiocese has paid close to $78.5 million of a total of more than $81 million awarded to 438 victims of sexual abuse by archdiocesan clergy. (CNS screengrab/Courtesy of CatholicPhilly.com)

The archdiocese promised to fund all claims awarded by the Independent Oversight Committee.

That funding has come from several sources, all in unspecified amounts, including sale of archdiocesan property and other assets as well as loans, plus what the archdiocese refers to as "risk mitigation payments from related ecclesiastical entities."

Such entities include Catholic Social Services and Catholic education, and they provide payments in varying amounts to the archdiocese for the IRRP compensation.

According to information posted on the Pledge to Protect website before the June 2 announcement, $66.5 million had already been paid to resolve 351 claims fully as of Jan. 27, 2021.

The archdiocese at that time expected that remaining claims would push the total expected payout to $102 million, and would require an additional $35.5 million. But the final total, according to the Independent Oversight Committee's report, is more than $81 million, of which $78.4 million has been distributed. The remaining compensation to be paid is $2.6 million.

To fund the remaining IRRP obligations since January 2021, according to the website, the archdiocese planned to gain "approximately $33.2 million from the sale or lease of nonrestricted assets; $28 million in risk mitigation payments from St. Charles Borromeo Seminary, Catholic Social Services and the Office of Catholic Education (sourced from nonrestricted surplus funds)."

If needed, commitments were obtained for a $10 million loan from the Priests Retirement Benefits Trust and a $15 million loan from Catholic Social Services, but it is unclear if those loans were ever taken for IRRP compensation.

In the funding for the compensation, which Pérez called "clearly substantial," donor gifts with restrictions that were made to the archdiocese and its related entities "were not used for IRRP purposes."

In his letter, the archbishop said the IRRP "provided an opportunity for survivors to share their experiences, identify their abusers, access support resources and receive meaningful compensation."

He said that "through vigilance, employing best practices and education, the church in Philadelphia will remain at the forefront of protection and prevention. Although the work of the IRRP has concluded, the archdiocese will continue to offer comprehensive support to survivors of clergy sexual abuse through its own Victim Assistance Program as it has for many years."

That assistance program benefited from the IRRP in that it reviewed and made recommendations for the archdiocese's abuse prevention and victim services programs.

The IRRP report said that "few, if any, other dioceses employ this feature in their restitution and reparations programs."

Beyond the monetary awards for victims of clergy sexual abuse, the opportunity for victims to be heard and understood by IRRP administrators stood out as a program feature.

Comments from victims were characterized as "concerns" about the archdiocese's child protection efforts and how "complaints about priests in active ministry" are managed, according to the report.

IRRP administrators raised those concerns in a meeting with archdiocesan officials, and "we were satisfied with the answers we received," the report said.

The IRRP also made unspecified recommendations to the archdiocese, which "has committed to continuing to monitor best practices in the safe environment policy field, periodically review its own policies, and be prepared to adapt and evolve its approaches as needed," the report concluded.