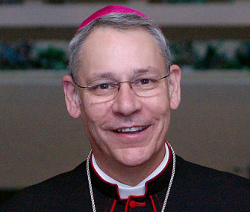 KANSAS CITY, Mo. -- The trial of Bishop Robert W. Finn and the diocese of Kansas City-St. Joseph, Mo., the first bishop and diocese to face criminal charges in the decades-long clergy sex abuse crisis, has been set for September.

Finn and the diocese were charged in October by a grand jury in Jackson County, Mo., with separate counts of failing to report suspected child abuse in the case of Fr. Shawn Ratigan, a diocesan priest who was arrested last May for child pornography.

Speaking to NCR after the meeting, which was held in the judge's chambers, Jackson County prosecutor Jean Peters-Baker said Torrence also set the next pretrial hearing for March 27, when the court would deal with motions from the defense.

Gerald Handley, one of three lawyers representing the diocese, said the judge had given defense lawyers until early February to file motions in the case, which the prosecution would have to respond to by March 9. Two other lawyers were also present to represent Finn.

News of the trial date comes after the diocese confirmed Wednesday that it placed another diocesan priest on administrative leave pending a review by the diocesan review board into unspecified allegations.

In a press release, no details about that case were available because the review board's investigation is still under way.

"While this investigation is in a preliminary phase, the diocese urges everyone to understand that further information only can be made available once the facts are known," the statement reads.

The trial date also comes as Finn is undertaking court-mandated parish visits to parishes in Clay County, Mo., as part of an agreement with the county prosecutor there to avoid charges in the Ratigan case.

The diocesan chancery is located in Jackson County. The parish where Ratigan last served as pastor is in Clay County.

The Clay County agreement between Finn and prosecutor Daniel White allowed the bishop to avoid criminal charges if he agreed to meet with diocesan parishes in that county to outline diocesan reporting procedures for suspected child abuse.

Finn also agreed to meet monthly with White to discuss all reported suspicions of abuse in the county and to appoint a new director of child and youth protection.

The second in a series of visits to county parishes took place Jan. 14 at St. James Church in Liberty, Mo.

[Joshua McElwee is an NCR staff writer. His e-mail address is jmcelwee@ncronline.org.]

German cardinal asks pope to study cover-up allegations against him

Australian archbishop: 'As Catholics, we hang our heads in shame'

New Ulm diocese third in Minnesota to file for bankruptcy