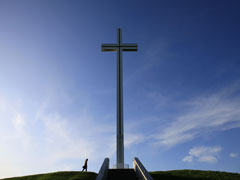 A man walks past the Papal Cross, which was built for the visit of the late Pope John Paul II in September 1979, in Phoenix Park, in Dublin, Ireland. (Newscom/Getty Images/AFP/Peter Muhly)

DUBLIN, Ireland -- The self-described conservative Catholic mother of four said simply, “The Vatican is up on its hind legs.” That was one reaction -- and a not uncommon one -- to a Vatican report issued Sept. 3 countering Irish Prime Minister Enda Kenny’s sharp accusations in July that top church officials had tried to keep the lid on the Irish bishops from forthrightly reporting sexual offenders to the civil authorities.

The question in the minds of many here, as the political establishment takes up the issue, is whether Kenny will back down. On Sept. 7 he said that he is “standing by his claim” of unwarranted “Vatican interference” in Ireland’s affairs.

He called the Vatican response “technical and legalistic.” The inquiries into sexual abuse in Ireland required “nothing less than full cooperation” from the Vatican, which was not forthcoming, he said.

The Irish political and religious analyst John Cooney told NCR early this month that the Vatican felt it had the information flow surrounding the crisis “under control,” and that “Kenny’s rocket came as a big surprise.”

The Vatican, he said, had adopted a professional handling of information flow with a carefully controlled apostolic visitation to Ireland late last year, “using American and Canadian bishops with ‘Paddy’ names as interrogators on behalf of Rome.”

“Then came Kenny -- a cradle Catholic with a young family,” Cooney said. “He has not quite explained why he did it, so the key thing in the next two or three weeks, or two or three months, is whether Kenny is going to keep going. I just don’t know.”

The Vatican’s 11,000-word response was unusually detailed and made the case that it had not subverted efforts by the Irish bishops to report sexually abusive priests to the police, saying that claims to the contrary by Kenny are “unfounded.”

Kenny described as “the dysfunction, disconnection, elitism ... the narcissism that dominates the culture of the Vatican to this day.”

He spoke in the wake of a critical Irish government July report on the rural Cloyne diocese. The report found that abuse allegations had been mishandled as recently as 2009.

Following Kenny’s remarks, the Vatican recalled its nuncio, or ambassador, to Ireland, an indication of its shock and dismay.

The Vatican remarks represent its most comprehensive response so far to both the Cloyne Report and Kenny’s statement, which found a largely positive echo in scandal-weary Ireland.

Both the Cloyne Report and Kenny based much of their criticism of the Vatican on a 1997 letter from Congregation for Clergy in Rome to the papal nuncio in Ireland. The letter warned that some elements of a draft set of sex abuse guidelines the Irish bishops had developed in 1996, including support for “mandatory reporter” policies on child abuse, could conflict with canon law.

The Cloyne Report charged that the letter offered “cover” for church officials who chose to ignore the new policies on abuse.

“I remain of the view that the 1997 letter from the then-nuncio provided a pretext for some to avoid full cooperation with Irish civil authorities,” he said.

Archbishop Diarmuid Martin of Dublin also released a statement following the Vatican report, saying it shows that the focus on the 1997 letter is unwarranted.

The letter, Martin said, “did not impede the Irish bishops in unanimously approving the Framework Document, in applying it and in consistently developing that framework into the current positions of the Irish church.”

In truth, Martin said, officials who turned a blind eye to abuse didn’t need any cover.

“The fact is that these same people ... continued to reject the clear norms approved by Pope Benedict when they were published,” he said. “They were people who regarded only their own views and would take no note of study documents, of Framework Documents or even of approved papal norms.”

“These people may be few but the damage they caused was huge,” Martin said. That damage, Martin said, illustrates the need for an “ongoing process of independent monitoring and reviewing of day-to-day practice.”

Martin also noted that recent documents from the Vatican’s Congregation for the Doctrine of the Faith on sex abuse mention at least 20 times cooperation between church and state and the importance of respecting national laws on reporting abuse.

One prominent Irish victim, Marie Collins, said the Vatican’s defense highlighted the need for Ireland to pass a law making the non-reporting of suspected child abuse a specific crime. “As long as it’s not there, the church can defend its own actions as the document does,” she said.

Meanwhile, judging from the headlines here, pro and con Kenny, con and pro the Vatican, half of Ireland appears up on its hind legs pawing the air over this, too.