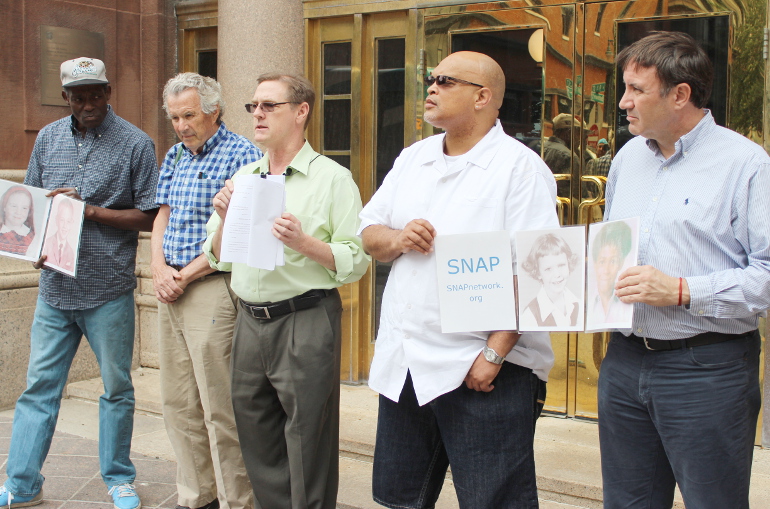 Survivors of clerical child sex abuse and their allies are demanding that the Kansas City-St. Joseph diocese drop its appeal against an arbitration ruling that it pay victims of clergy sex abuse $1.1 million for breaching an agreement in a 2008 sex abuse settlement.

Clohessy said the breach of contract suit was the first of its kind. According to Clohessy, no other survivors have checked in on previous legal agreements, found a breach of contract, and sought arbitration. He called it a huge victory for survivors of clerical sex abuse.

The suit was filed as a result of the case surrounding Shawn Ratigan, a former Kansas City priest convicted of child pornography charges. The diocese failed to report to authorities suspicions that Ratigan possessed pornographic pictures of children for nearly five months after diocese officials were alerted to suspect images on the priest’s computer in early 2010. In September 2012, Finn was convicted of a misdemeanor charge of failing to report suspected child abuse and under a two year suspended sentence in Jackson County, Mo.

The abuse survivors of the 2008 settlement say that these actions violated terms of that settlement, which included a $10 million penalty and a list of non-monetary actions the diocese agreed to take to protect children from future abuse. Hanover agreed with the victims and ordered the diocese to pay the $1.1 million.

The diocese is contesting the arbitration, saying that Hanover has “exceeded his authority” and that there are no provisions of the 2008 agreement that would allow the arbitrator to award further monetary damages.

The diocesan spokesman told NCR the diocese had no comment on the demonstration held outside its offices Wednesday, which began with a moment of silence for all victims of child sex abuse and was followed by impassioned speeches from Clohessy and other survivors.

Though Clohessy called for Finn to, “stop fighting tooth and nail in court,” in regards to the various legal suits the diocese has taken on, the court filing he distributed suggested that the 40-plus survivors would not back down. According to Clohessy, the diocese has already paid over $7 million in court fees in the last two fiscal years.

The eight-page court filing, which defended the arbitration, claimed the purpose of arbitration was “to force diocesan officials to honor their agreement to protect children.”

Robert Bates, a survivor and member of the 2008 settlement group, which is comprised of 47 people, found Finn’s motion to repeal the arbitration astonishing and a nightmare, especially after Finn had signed a contract.

“For survivors … it’s a slap in the face,” said Bates.

Though the members of SNAP expressed frustration with the diocese, some found hope in their progress, saying it will help other victims of abuse monitor their diocese to further hold them accountable.

“I hope this will be a wakeup call for bishops across America that once you sign that settlement check it’s not over,” Clohessy told NCR. “If you made pledges to victims to do a better job with children’s safety, then you better keep those pledges.”

“I hope it will also cause hundreds and hundreds of victims to look at their own settlement agreements, see what they were promised and take steps to enforce those promises.”