SNAP director may be forced to testify in abuse case 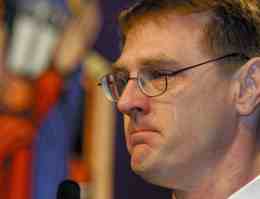 KANSAS CITY, Mo. -- The leading advocacy group for child victims of clergy sex abuse may be compelled to turn over 23 years of internal documents, correspondence and email to the attorneys of an accused priest unless Missouri state courts act to quash a court-ordered deposition.

David Clohessy, head of the Survivors Network of those Abused by Priests, known as SNAP, has been ordered to appear for deposition in a county court case involving allegations of sexual misconduct against Kansas City diocesan priest Fr. Michael Tierney.

Victims’ advocates say if Clohessy is compelled to appear, it could have wide-ranging impact on the ability of victims of clergy sex abuse to identify their accusers and tell their stories without revealing their names in public.

Also at stake is the confidentiality of emails between reporters and victims’ advocates that may reveal sensitive information and names of sources. In a court filing, the Missouri Press Association said Clohessy’s deposition would “eviscerate the free-press guarantee” of journalists.


Clohessy has also been ordered to submit:

According to court filings, defense lawyers for priests and former priests named in six other sex abuse lawsuits have requested to “cross-notice” Clohessy’s deposition in order to have access to his testimony.

Court records indicate that Clohessy and his group first attempted to quash the deposition by filing motions with Jackson County, Mo., Circuit Court Judge Ann Mesle, citing concerns of confidentiality for sex abuse victims and the rights of freedom of speech and assembly.

Clohessy and his group appealed Wednesday, Dec. 28, to Missouri’s Court of Appeals for the state’s Western District to try to quash the order. That appeal, court records indicate, was denied Thursday.

Following the denial by the appeals court, Clohessy’s lawyer said he and his client are “going to take every legal option we can” to prevent the deposition and are investigating filing for review with the Missouri Supreme Court.

Tierney’s lawyers first made the request for a deposition in November. They subpoenaed Clohessy, requesting him to testify regarding his knowledge of a lawsuit filed against Tierney on behalf of an abuse victim in September 2010.

Court filings indicate that the subpoena came after defense lawyers were concerned that a party in the suit may have violated an August 2011 gag order from Mesle by revealing some information to SNAP that was included in one of the group’s press releases.

The lawsuit, filed on behalf of an anonymous man, alleges that in 1971 Tierney invited the then-13-year-old to Tierney’s mother’s house to help Tierney move boxes. Once there, the victim alleges in the suit, Tierney wrestled with him and touched him sexually.

“Fr. Tierney rushed the boy, tackling him and holding him down while he forcibly and against the boy’s will touched and fondled the boy, rubbing all over his body, including his private areas,” reads the lawsuit. “[The boy] repressed all memory of these events until approximately 2008.”

SNAP’s appeal to the Missouri Court of Appeals cited state law on the confidentiality of information given to rape crisis centers, saying the law “renders Clohessy incompetent for deposition” in the lawsuit.

Moreover, the appeal says, “each and every category of documents” required by Tierney’s subpoena is “directly related to the important advocacy services SNAP provides to this vulnerable segment of society.”

“Missouri law,” the appeal says, “plainly requires this court to prohibit enforcement of this order as an abuse of discretion, an abuse that would irreparably damage SNAP’s ability to function as a support and advocacy group for victims of sexual abuse.”

Mesle addressed Clohessy and his group’s concerns about violating state law in two separate responses to motions from Clohessy asking for the subpoena to be quashed.

In a Nov. 30 order, Mesle acknowledged that SNAP’s motions to quash the subpoena “raise significant issues” regarding the extent of the document request and privacy interests as noted in Missouri’s confidentiality law for rape crisis centers.

While Mesle said those concerns are “legitimate,” she ordered that Clohessy submit to the deposition, but said he may prepare a “privilege log” indentifying documents he believed to be confidential. Those documents, she said, could be reviewed in a closed court setting.

Along with SNAP’s request to quash Mesle’s order, the state appeals court also received two amicus briefs from groups supporting Clohessy’s arguments that his deposition and submission of documents would be unconstitutional.

In one of the briefs, the Missouri Press Association, which lists some 260 newspapers from across the state as its members, says the order, if allowed, would “chill speech by both media outlets and potential sources and significantly affect the quality of investigative reporting.”

Citing nine separate state and U.S. Supreme Court cases that outline the rights of the press, the brief says Mesle’s order would “eviscerate the free-press guarantee” by seeking “to discover the process by which the news is assembled and disseminated.”

Acknowledging that Missouri has not enacted a shield law to protect reporters from indentifying their sources, the brief cites Missouri cases that “have recognized that at some level, there must be some protection for the news-gathering process.”

The lawyer representing the association said in an interview that while the group recognizes it doesn’t have a stake in some of the issues being raised by Mesle’s order, it felt it had to file the amicus brief because the order puts a “significant burden” on the freedom of the press.

“There are many reporters across the state of Missouri who have or may have contacted Mr. Clohessy in his role at SNAP, working on stories they’re working on,” said Jean Maneke, a Kansas City-based lawyer with 25 years experience representing media organizations.

NCR is one of the organizations that may be impacted by the submission of documents, as reporters have been in contact with Clohessy as a source for decades.

“The scope of this recovery request puts a significant burden on the right, under the First Amendment, that reporters across the state have to gather information and to assert their rights under freedom of the press,” Maneke said.

The second brief filed in support of SNAP’s request to prohibit Mesle’s order is signed by 10 victims’ advocacy groups, including the Foundation to Abolish Child Sexual Abuse, the Kid Safe Foundation and the National Child Protection Training Center.

That brief argues that Mesle’s order amounts to a “violation of the anonymity and confidentiality” of SNAP members and volunteers and is “plainly unconstitutional.”

Citing the 1958 U.S. Supreme Court case NAACP v. State of Alabama, the brief likens the order to hand over SNAP documents to public identification of NAACP members in Alabama that “exposed these members to economic reprisal, loss of employment, threat of physical coercion, and other manifestations of public hostility.”

“Similarly,” the brief states, “if the discovery is permitted survivors and witnesses of sexual abuse will no longer feel comfortable approaching SNAP in confidence.”

Marci Hamilton, noted for her decades of work with clergy sex abuse victims, said the subpoena is “one of the uglier moves I’ve seen by any organization in these cases so far.”

Saying that SNAP “is the least” of the organizations that would be affected by Clohessy’s submission of documents, Hamilton, a professor at the Cardozo School of Law at New York’s Yeshiva University, said the “end result” of the order would be “a huge chilling effect on helping child sex abuse victims at every stage.”

“I think it’s plainly unconstitutional and, were I involved, I would be advising any organization faced with this kind of a subpoena to refuse to provide the information because it is unconstitutional, inappropriate and cruel,” said Hamilton, who is the author of Justice Denied: What America Must Do to Protect Its Children.

Asked whether Mesle’s allowing of certain SNAP documents to be read in private would protect victims, Hamilton said those revelations would still “send a really serious and sad message to victims that when they come forward…a judge may well read about the details of their abuse.”

Accountability | SNAP director may be forced to testify in abuse case

Amid cover-up allegations, German prelate steps down from lay organization