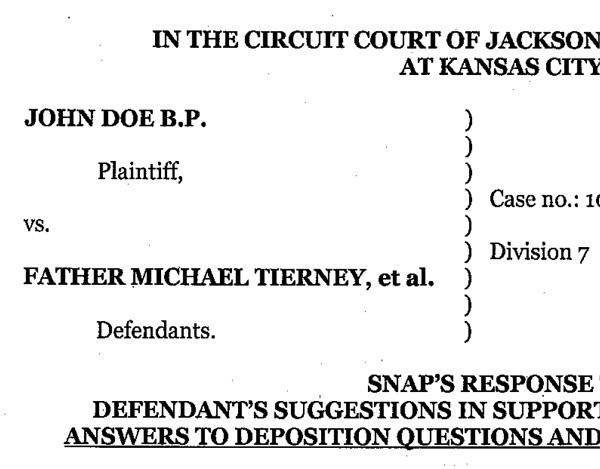 KANSAS CITY, Mo. -- Lawyers' attempts to force the director of a national clergy abuse support group to submit to a second deposition and turn over more internal documents is "simply an attempt to harass" the organization, leadership of the group has said in a court filing.

David Clohessy, director of the Survivors Network of those Abused by Priests, or SNAP, was forced to give a deposition Jan. 2 in the case of a Kansas City priest accused of child sexual abuse, the first time a SNAP leader has been forced to testify. Seven lawyers deposed Clohessy for six hours, and he turned over documents in two of eight requested categories.

Two months ago, the defense lawyers asked the court to compel Clohessy to testify again and to hand over more documents from SNAP's 23 years of records, correspondence and email. That filing also alleged that Missouri confidentiality protections for rape crisis centers should not cover the group.

SNAP's response, which was filed with the court April 6 and posted to its website last week, refutes the latter claims and says any more attempts to depose Clohessy would amount to a "true fishing expedition."

Fr. Michael Tierney, the accused priest, "is attempting to use the discovery process as a 'scorched earth battlefield,' " SNAP's motion alleges. "Clohessy's deposition has demonstrated that Tierney cannot establish that the information he seeks to discover falls within the scope [of the law], and therefore the Court should overrule his motion."

A decision regarding the competing motions could come as early as Friday, when Jackson County (Mo.) Circuit Court Judge Ann Mesle is set to hear arguments from lawyers in the case.

Mesle's decision could have wider significance, as SNAP has received similar subpoenas for testimony in a case involving a priest accused of abuse in St. Louis. While both Clohessy and Barbara Dorris, the group's outreach director, received subpoenas in January regarding that case, court filings do not indicate when their depositions are expected.

In its 25-page motion in the Kansas City case, SNAP states Mesle should focus on two issues in making her decision about forcing more testimony: whether the organization had been in contact with the plaintiff in the abuse case and whether it violated a gag order issued by the judge in August 2011 with a press release referring to the case against Tierney.

To the first question, the motion states SNAP "has no record or knowledge of ever speaking" with the defendant. To the second, it states SNAP issued the press release before Mesle's gag order and only included publicly available information.

Along with his testimony in January, Mesle had ordered Clohessy to submit documents and correspondence from SNAP's files in eight separate categories, including all correspondence referring to Tierney or the Kansas City-St. Joseph diocese, and all of its files concerning repressed memory.

The transcript of Clohessy's deposition, which was first made public in March, revealed the SNAP leader refused to submit documents in at least six of those categories, saying he believed they were privileged and protected by state or federal law.

SNAP's motion argues that only one category of documents should have been permissible for submission, the document requested all correspondence between the group and the plaintiff in the case, who has remained anonymous and is referred to in court filings as John Doe B.P.

To that point, the motion cites Clohessy's answer in his deposition that he had never had contact with the defendant.

"Given that SNAP has had no known communication with B.P., SNAP's view on Tierney, the dioceses, or repressed memory in general have no bearing on [the] issues in this case whatsoever," the motion states. "Any information that SNAP possesses on these topics cannot be used by Tierney or the Dioceses to impeach John Doe B.P. or any other fact witness in this case."

The motion alleges Mesle issued a gag order after SNAP put out a press release about the case and that, as a publicly filed document, the press release giving notice of the lawsuit "could not violate any Court's protective order," as Tierney's lawyers state.

"Absent any evidence that SNAP was involved in any conduct that would constitute a violation of this Court's protective order, discovery on this topic is a complete waste of time at best, and abusive at worst," the motion reads.

SNAP's April motion states that this argument "utterly ignores" Missouri laws defining rape crisis centers. The applicable section of the Missouri code, the motion states, defines such centers as "any public or private agency that offers assistance to victims of sexual assault."

Additionally, SNAP's motion also claims that the protections afforded to victims under the rape crisis center statute "cannot be pierced for even good cause."

Comparing the protections afforded to victims under the statute to those afforded by attorney-client privilege, the motion alleges its confidentiality promises are "not an exercise of judicial discretion."

Along with the motion April 6, SNAP filed an affidavit containing testimony from Barbara Blaine, its founder and president, regarding her knowledge of the case and how the group operates.

In her statement, Blaine focuses on how the group views the confidentiality it provides to victims it works with, stating that "confidentiality is absolutely essential to SNAP's existence."

"If people thought lawyers for accused sexual predators could successfully force SNAP and its staff and members to disclose information that was promised to be confidential ... it would be the end of the organization and the end of our advocacy against clergy sexual abuse," Blaine states.

The April motion is the first filed on behalf of the organization by Brendan J. Donelon, a Kansas City-area lawyer who is representing the organization pro bono. Clohessy told NCR in February that the legal battle to prevent his testimony had left the group "basically broke" and had forced him to release his previous lawyer in order to save money.

[Joshua J. McElwee is an NCR staff writer. His email address is jmcelwee@ncronline.org]

For the full copy of SNAP's motion, click here.