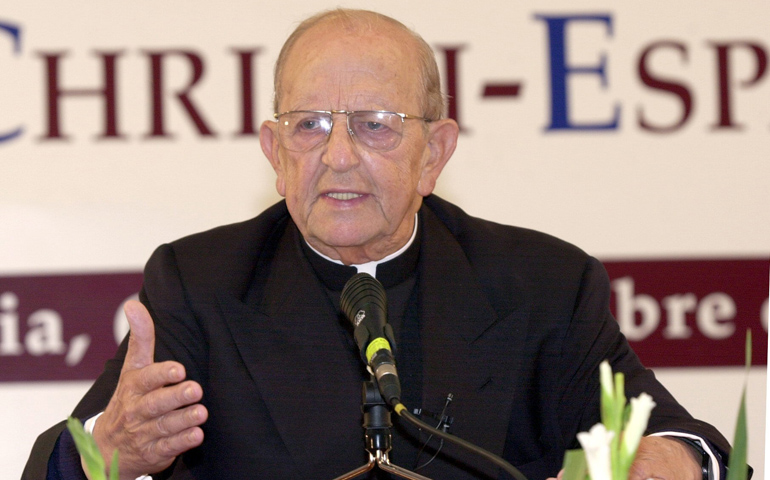 Fr. Marcial Maciel Degollado, founder of the Legionaries of Christ, speaks at a conference in Madrid, Spain, in 2001. (CNS/EFE/J.L. Pino)

Mexican police arrested Jose Raúl Gonzalez Lara, a biological son of the late Legion of Christ founder Fr. Marcial Maciel, on Monday on charges of attempted extortion against the Legion.

Gonzalez Lara was taken from his home in Cuernavaca and jailed in Penal de Barrientos in Tlalnepantla, a rough industrial suburb in the northern part of sprawling Mexico City. He posted bail, and reportedly was released from custody late Tuesday.

CNN broadcaster Carmen Aristegui wrote in an email that authorities confirmed the arrest at 5 p.m.

"No one has officially recognized that he was arrested at 7:30 a.m.," said Aristegui, the author of Marcial Maciel: Historia de un Criminal.

Gonzalez Lara, 33, married with a 1-year-old son, works in a physical fitness center. In 2010, St. Paul, Minn., attorney Jeff Anderson sued the Legionaries in Connecticut, where the order has its American headquarters, stating that Maciel abused Gonzalez Lara in several U.S. locations as he was growing up, and that the order knew the founder had a history of abusing seminarians.

In 2006, the Vatican after an investigation ordered Maciel to a life of prayer and repentance. He died in 2008 in Jacksonville, Fla., in the presence of his 23-year-old daughter, Normita, and her mother, Norma Hilda Banos, Mexican nationals who had established residency in Spain.

Gonzalez Lara is the older of Maciel's two sons from a relationship with a second woman in Mexico, Blanca Gutierrez Lara.

His arrest marks a bizarre twist by which an arrest in Mexico would appear to bolster a legal defense in Connecticut.

On Oct. 5, 2011, the Hartford, Conn., law firm Robinson & Cole filed a counter-claim for the Legion, charging that Gonzalez Lara used extortion, seeking $26 million from the Legion in Mexico.

The arrest is particularly odd because the events in question were widely reported in the news media two and a half years ago.

The counter-claim defense in Hartford cited statutes of foreign law.

The document alleges that Gonzalez Lara engaged in a conspiracy with Mexico City attorney Jose Bonilla after failing to gain a settlement with the Legionaries for inheritance rights as allegedly promised by the late Maciel.

"We filed an answer to the counterclaims denying liability and asserted multiple defenses," New Haven attorney Joel Faxon, the Connecticut co-counsel on the case, said. "We know that the counterclaim is a spurious and ineffective effort by the Legion to intimidate and threaten the plaintiff."

Faxon said the court order for scheduling motions in a summary judgment decision would likely to come in mid- to late 2013.

Whether the criminal arrest of a plaintiff in Mexico will have bearing on an American lawsuit is unclear. A protective order in Connecticut has barred discovery findings in the litigation from the public.

The counter-claim does not mention the role of a Mexican bishop delegated by Pope Benedict to investigate the Legion who advised Gonzalez Lara to seek a negotiated settlement.

In a 2010 interview, Gonzalez Lara recounted a sordid history of abuse by Maciel, with whom he had sporadic encounters growing up, believing him to be a CIA agent. Maciel took him to a Vatican Mass as a boy where he had his photograph taken with John Paul II. When he was older, he said, Maciel told him he would inherit a $6 million trust. As he began resisting the sexual overtures, Maciel in his later years withdrew from the second family.

Gonzalez Lara, his mother, a younger brother and an older half-brother learned of Maciel's death on TV in 2008.

In that interview, he told NCR that in 2003, Maciel assured him that Legionary Fr. Alvaro Corcuera -- who would succeed Maciel as director-general of the order -- and a second priest "were going to look after us after his death." He said he called the Legion headquarters in Mexico City and left messages for both men, to no avail.

In 2009, Gonzalez Lara and his family twice met with the late Mexican Bishop Ricardo Watty, the Vatican-appointed visitator in the Legion investigation ordered by Pope Benedict. Gonzalez Lara said he gave Watty letters to the pope detailing the abuses to him and his older half-brother, Omar. They asked to meet with Vatican Secretary of State Cardinal Tarcisio Bertone, to no avail.

Watty "showed that he really felt sorry about what happened," Gonzalez Lara said. The bishop arranged for him to meet with Legion Fr. Carlos Skertchly, an official at the order's Anahuac University in Mexico City. A long, circuitous series of meetings ensued, in which Gonzalez Lara said he provided documents proving Maciel's relationship and intent of financial support.

His attorney at that time, Jose Bonilla, said in 2010 that a family trust fund Maciel established turned up empty. The Legion gave Gonzalez Lara a copy of a trust they told him was taken away from Normita, the daughter, in Spain, according to Bonilla.

The same day of the interview with Bonilla, Gonzalez Lara, his mother and two brothers went public in a radio interview with Aristegui. The Legion released a statement on Skertchly's meetings with Gonzalez Lara, saying the order rebuffed his demand for $26 million for which he had reputedly promised silence in return. Bonilla withdrew as legal counsel, citing professional ethics over a client bargaining silence for money.

In a May 7, 2010, interview with NCR, Gonzalez Lara said he severed ties with Bonilla for giving him poor advice.

The counter-claim in the Connecticut case says that "Raúl, under the auspices and with the consent of Bonilla" met with Sketcherly. The Legionaries rebuffed "his extortionate demand."

"It is commonly accepted that neither the police nor the criminal-justice system are trustworthy or even functional in Mexico," American journalist David Lida, author of First Stop in the New World, a book on Mexico City, told NCR.

Penal de Barrientos, where Gonzalez Lara was sent after his arrest, "was hit with riots in 2006 and 2007," said Lida, who lives in Mexico. "Last August, a video report showed uniformed guards charging visitors money before they allowed them inside to see prisoners."

Many officers are looking to supplement their incomes through extortion of the public. In 2008, a documentary called Presumed Guilty detailed how common it is for innocent people to be arrested, tried and sentenced in Mexico.

"Given that most Mexicans don't trust official institutions, it's not surprising that people are voicing suspicions that the charges were trumped up in an attempt to discredit Gonzalez Lara and to salvage the scant remains of Maciel's reputation," Lida said. "Even if Gonzalez Lara attempted extortion, most Mexicans would agree that whatever happens, we are unlikely to know the truth."

Gonzalez Lara posted bail of about $3,600 the night of his arrest and was released from custody late Tuesday. The charge, attempted extortion, was listed as a misdemeanor, according to Aristegui.

[Jason Berry is the author of Render unto Rome: The Secret Life of Money in the Catholic Church, which received the 2011 Book Award from Investigative Reporters and Editors.]

Editor's Note: An earlier version of this story reported that Jose Raúl Gonzalez Lara was still in jail. After the article was posted, NCR learned that he had been released.