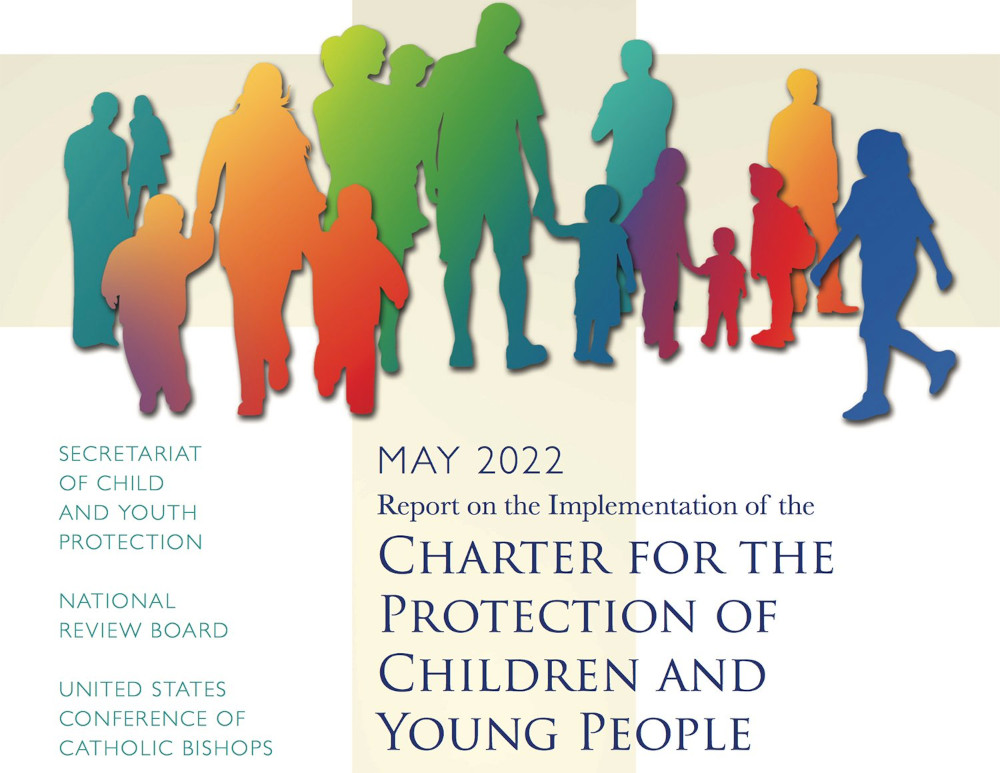 This is the cover of the U.S. bishops' 19th annual report on the implementation of the "Charter for the Protection of Children and Young People" by dioceses and eparchies. Released July 12, 2022, the report is for audit year July 1, 2020, to June 30, 2021. (CNS photo/courtesy USCCB)

The U.S. bishops' annual report on compliance with the "Charter for the Protection of Children and Young People" shows that 2,930 victim survivors came forward with 3,103 allegations during the audit year of July 1, 2020 to June 30, 2021.

The number of allegations is 1,149 less than that reported in 2020, according to the audit report released July 12 by the U.S. Conference of Catholic Bishops' Secretariat of Child and Youth Protection.

"This decrease is due in large part to the resolution of allegations received as a result of lawsuits, compensation programs, and bankruptcies," said a news release accompanying the report. "Of the allegations received, 2,284 (74%) were first brought to the attention of the diocesan/eparchial representative by an attorney."

The majority of allegations received were "historical in nature," meaning the alleged victim is now an adult and the abuse happened in years or decades past. During this audit year, there 30 were new allegations.

The report is based on the audit findings of StoneBridge Business Partners, a specialty consulting firm based in Rochester, New York. Also included in the report are results of a survey on allegations conducted by the Center for Applied Research in the Apostolate at Georgetown.

The charter was adopted in 2002 by the U.S. bishops following widespread reports of clergy abuse and has been revised several times since to adapt to changing situations surrounding the question of clergy sexual abuse of minors. It was revised in 2005, 2011 and 2018.

Of the new allegations made by current minors, six were substantiated; nine are still under investigation; nine were unsubstantiated; five could not be proven; and one was referred to the provincial of a religious order.

"This year’s audit, once again, shows that new cases of sexual misconduct by priests involving minors are rare today in the Catholic Church in the United States," Los Angeles Archbishop José H. Gomez, USCCB president, said in a preface to the report. He added that "every offender was removed from ministry. Every allegation was reported to law enforcement."

"As we know, one allegation of abuse is too many," he said, "But my brother bishops and I remain firmly committed to maintain our vigilance in protecting children and vulnerable adults and providing compassion and outreach to victim-survivors of abuse."

"On behalf of my brother bishops, I again want to express our sorrow and apologies to every person who has suffered at the hands of someone in the church. And again, we pledge our commitment to the healing of victim survivors and to doing everything in our power to protect children and vulnerable adults."

In 2021, the church conducted 1,964,656 background checks on clergy, employees and volunteers. In addition, over 2 million adults and over 2.4 million children and youth were trained in how to identify the warning signs of abuse and how to report those signs.

Despite restrictions experienced due to the pandemic, elements included in the charter audit process conducted by StoneBridge Business Partners, were not altered:

Seventy dioceses/eparchies were visited either in person or via remote technology and data was collected from 122 others.

Article 2 requires they have a lay-run review board that functions as a confidential consultative body to the bishop/eparch.

Subsequent convening of the review boards of the dioceses and the eparchy brought each of them into compliance with Article 2.

Three eparchies and one diocese did not participate in the audit: the Chaldean Eparchy of St. Peter the Apostle, the Eparchy of Our Lady of Lebanon, St. Nicholas Ukrainian Catholic Eparchy, and the Diocese of St. Thomas in the Virgin Islands.

"May the Lord bless and preserve our efforts to make good on our promise to protect and pledge to heal," Suzanne Healy, who chairs the National Review Board, said in a letter to Gomez included in the report.

She said the NRB "continues to recommend that all dioceses and eparchies participate in the audit, but also audit every single parish in their ordinances. Parishes and school audits provide the most effective evaluation tool for diocesan/eparchial safe environment efforts."

The board also "recommends examination of the efficacy of safe environment programs for both adults and children to ensure the training is working toward our promise to protect," she added.

She said the board recommends enhancing the audit process with "possible expansion of the audit scope to include measures" in Pope Francis' 2019 "motu proprio" "Vos Estis Lux Mundi" -- which established procedures for reporting allegations of sexual abuse and for holding accountable bishops, eparchs and religious superiors who protect abusers.

The process could also include, she said, a new section of the Code of Canon Law dealing with crimes and punishments in the church: "Book VI: Penal Sanctions in the Church.

The NRB suggested a voluntary "mentorship" program between eparchies that do not participate in the audit and other eparchies that do, she said, and it also proposed there be one day when parishes in every diocese offer "a liturgy of lament for victims/survivors of clergy sexual abuse and their families."

"Through the efforts of many individuals, both lay and ordained, the culture and attitudes surrounding the abuse of children has and will continue to change," Deacon Bernie Nojadera, director of the Secretariat for Child and Youth Protection, said in a letter to the archbishop in the report.

He has been blessed by the survivors he has come to know, he said, by them "sharing their stories and how they learned to cope and survive and, in some cases, thrive. I am honored and humbled to be in the presence of such holy people."

"The church will be successful in her journey toward conversion, reconciliation, healing and hope through the relationships with victims/survivors," he said.

"The healing of such experiences is a process of listening, accompaniment and atonement. ... Together, with our sisters and brothers who have been abused, we can and will weather this storm and grow in the abundant love of our Lord," the deacon said.