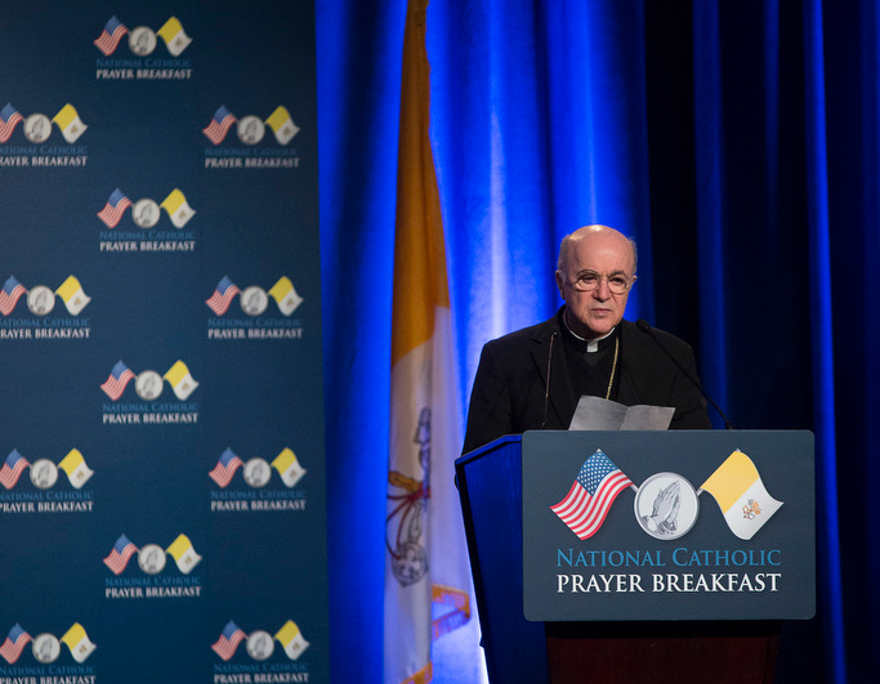 This story was updated at 5:45 a.m CDT to add comments from Bishop Robert C. Morlino of Madison, Wisconsin.

U.S. cardinals issued separate statements pointedly rejecting allegations, made by a former Vatican ambassador to the United States, of a widespread cover-up of the sexual misconduct of former Washington Cardinal Theodore McCarrick.

Tobin, who now leads the archdiocese that McCarrick headed from 1986 to 2001 and that in the mid-2000s paid settlements to two men who said McCarrick sexually assaulted them years before when they were seminarians, expressed "shock, sadness and consternation" over Vigano's letter.

Some bishops in the U.S. hierarchy, however, said they found Vigano's allegations "credible" and Vigano "a man of truthfulness, faith and integrity."

Vigano claims that church officials, including Cardinal Donald Wuerl, the current archbishop of Washington, and Pope Francis, failed to act against McCarrick after Vigano informed the officials of McCarrick's sexual misconduct, and that Pope Benedict XVI had imposed sanctions on McCarrick.

In a statement Aug. 27, Wuerl directly contradicts the former nuncio and "categorically denied" that Vigano told him that restrictions had been placed on his predecessor.

The statement from the archdoicese said that "during his entire tenure as Archbishop of Washington," Wuerl had never received any complaints or allegations about abusive behavior by McCarrick, an assertion he has made several times since McCarrick announced his withdrawal from public ministry and his resignation from the College of Cardinals.

"The only ground for Cardinal Wuerl to challenge the ministry of Archbishop McCarrick would have been information from Archbishop Viganò or other communications from the Holy See. Such information was never provided," the statement read.

On Aug. 16, Cardinal Daniel DiNardo, president of the U.S. Conference of Catholic Bishops, asked for a Vatican investigation, known as an apostolic visitation, that would work with a national lay commission granted independent authority to investigate the "many questions surrounding Archbishop McCarrick."

DiNardo reiterated that call Aug. 27 (see related story) and said he was "eager for an audience" with Francis to discuss the bishops' plan to respond to the clergy sexual abuse crisis.

Wuerl said Aug. 27 that Vigano's tenure as apostolic nuncio to the U.S. should be included in the mandate of that investigation.

Tobin also called for an investigation into Vigano's claims, saying, "We are confident that scrutiny of the claims of the former nuncio will help to establish the truth."

Tobin said the letter "cannot be understood as contributing to the healing of survivors of sexual abuse."

"The factual errors, innuendo and fearful ideology of the 'testimony' serve to strengthen our conviction to move ahead resolutely in protecting the young and vulnerable from any sort of abuse, while guaranteeing a safe and respectful environment where all are welcome and breaking down the structures and cultures that enable abuse," he said.

Beyond his factual claims, Vigano's letter is laced as well with ideological claims about other Catholic bishops and Curia officials. He says one, for example, has a "pro-gay ideology" and that another "favored promoting homosexuals into positions of responsibility."

Vigano also alleges that McCarrick engineered the appointments of certain bishops to certain sees. He also called for the resignations of many bishops, including Pope Francis.

But he told NCR he was even more shocked by the letter's "derisive" tone.

"In any encounter I've had with [Vigano], he's always been very cordial and pleasant," Cupich said. "There has never been any indication to me the level of scorn that's in his letter about me. I was just stunned. I have no idea where that's coming from."

Bishop Robert McElroy of San Diego said Vigano's letter is another example of "ideological warriors within the Church on both sides  ... [using] the tragedy of victims of abuse to promote their goals."

The letter, McElroy said, is clearly an effort "to settle old personal scores."

"The dedication to comprehensive truth has been subordinated to selective targeting of enemies and tendentious distortions of the truth," McElroy said.

However, in a statement sent to parishes in the Diocese of Tyler, Texas, just hours after Vigano's testimony was made public, Bishop Joseph Strickland said he found Vigano's allegations "credible."

Strickland called for "a thorough investigation" of the allegations and he pledged to "lend my voice in whatever way necessary to call for this investigation and urge that it's findings demand accountability of all found to be culpable even at the highest levels of the Church."

Answering a query from The New York Times on Aug. 26, the Philadelphia archdiocesan spokesman said Archbishop Charles Chaput "enjoyed working with Archbishop Viganò during his tenure as Apostolic Nuncio to the United States and found his service to be marked by integrity to the church."

"However," the spokesman continued, Chaput "can't comment on Archbishop Viganò's recent testimonial as it is beyond his personal experience."

Bishop Thomas Olmsted of Phoenix also said that he has "no knowledge of the information that [Vigano] reveals ... so I cannot personally verify its truthfulness.

But Olmsted added, "I have always known and respected him as a man of truthfulness, faith and integrity."

Olmsted said that he has known Vigano for 39 years. They meet in 1979 when both worked for the Secretariat of State of the Holy See. Olmsted urged that "every claim that [Vigano] makes be investigated thoroughly."

Bishop Robert Morlino of Madison, Wisconsin, begins his statement of Aug. 27 by affirming his "solidarity with Cardinal DiNardo and his statement on behalf of the USCCB” especially DiNardo’s call to bring " ‘particular focus and urgency’ to the examination by the USCCB of the grave moral failings of bishops" and for renewing "our fraternal affection for the Holy Father in these difficult days."

"With those convictions and sentiments, I find myself completely in solidarity," Morlino continues.

However, I must confess my disappointment that in his remarks on the return flight from Dublin to Rome, the Holy Father chose a course of "no comment," regarding any conclusions that might be drawn from Archbishop Viganò's allegations.

The bias in the mainstream media could not be clearer and is recognized almost universally. I would never ascribe professional maturity to the journalism of the National Catholic Reporter, for example. (And, predictably, they are leading the charge in a campaign of vilification against Archbishop Viganò.)

"Having renewed my expression of respect and filial affection for the Holy Father," Morlino said, "I must add that during his tenure as our Apostolic Nuncio, I came to know Archbishop Viganò both professionally and personally, and I remain deeply convinced of his honesty, loyalty to and love for the Church, and impeccable integrity."

"Viganò has offered a number of concrete, real allegations ... Thus, the criteria for credible allegations are more than fulfilled, and an investigation, according to proper canonical procedures, is certainly in order," Morlino said.

He concludes by stating that his "faith in the Church is not shaken in the least by the present situation."

[Dennis Coday is NCR editor. His email address is dcoday@ncronline.org. He tweets @dcoday.]