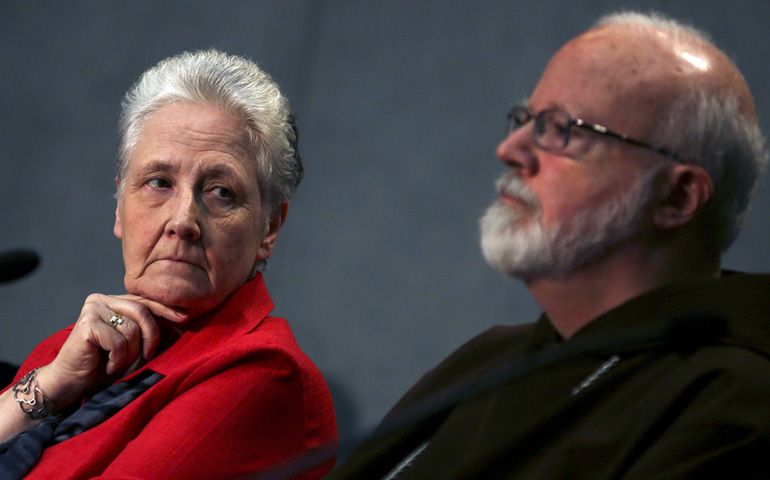 Marie Collins and Boston Cardinal Sean O'Malley during a May 3, 2014, briefing at the Holy See press office at the Vatican (CNS/Reuters/Alessandro Bianchi)

Rome — Members of the Vatican commission advising Pope Francis on clergy sexual abuse are making an unscheduled visit to Rome on Sunday, with some hoping to personally tell the pope their concerns about his appointment of a Chilean bishop accused of covering up abuse.

Four members of the commission will make the trip and are scheduled to meet Sunday evening with Boston's Cardinal Sean O'Malley, head of the Vatican commission and also a member of Francis' Council of Cardinals.*

Speaking exclusively to NCR on Friday evening, commission member Peter Saunders said he and the rest of the group will meet with O'Malley for a meal at the Vatican hotel where Francis lives and that Saunders hopes to encounter the pope there.

The members, Saunders said, are making the trip "to have a very, very urgent and important discussion with Cardinal O'Malley."

"I'm hoping that Francis will be there as well because we're going to meet [O'Malley] in the Domus Santa Marta about this Chilean bishop situation, which is really quite disturbing," said Saunders, a member of the Pontifical Commission for the Protection of Minors.

Marie Collins, another member of the commission who is making the trip, said Saturday that she and the group as a whole do not have an expectation of meeting the pope but are traveling specifically to meet with O'Malley.

The Boston cardinal will be in Rome next week for a meeting of the Council of Cardinals, the group of prelates advising Francis on how to reform the Vatican bureaucracy.

Saunders and the other survivors want to express concern about the pope's appointment of Bishop Juan Barros Madrid, who was installed last month as head of the church in the diocese of Osorno, Chile, amid protests in the cathedral.

Chilean survivors accuse Barros, whom Pope Francis appointed in January, of covering up abuse by Fr. Fernando Karadima. The survivors say that as a priest, Barros not only worked to cover up Karadima's crimes, but witnessed some of them as they happened.

Saunders said Barros "should not be in charge of a diocese where he will be responsible for young people. It's an outrage."

"I personally think that that man should be removed as a bishop because he has a very, very dubious history -- corroborated by more than one person," said Saunders, who is also the founder of the U.K.-based National Association for People Abused in Childhood.

"This is a well-known scenario of intimidation and abuse that went on for a long time," he continued. "And that man is still in a position of power, and it shouldn't be the case."

"The Congregation for Bishops carefully examined the prelate's candidature and did not find objective reasons to preclude the appointment," read that statement, made in the name of press office vice director Passionist Fr. Ciro Benedettini.

Collins said Saturday that she and the other members have no expectation of meeting Francis on Sunday.

"Hopefully, [O'Malley] will pass on our concerns," she said.

Saunders and Collins are two of 17 members of the Vatican abuse commission, which the Vatican announced in December 2013 but which met for the first time in its entirety in Rome in February.

"The pope cannot say one thing and then do another," Saunders said Friday. "None of us can."

"If he says bishops must be accountable and will be held to account, if there is zero tolerance of anybody within the ranks of the church who is abusing, then they are out -- then he has to stick to that," he continued.

"I need an explanation as to why these things are not happening. Otherwise, I cannot see any point of me being on the commission," Saunders said. "I'm pretty sure that others may feel the same."

The British survivor also said he wrote a letter for Francis about his remarks in February that seemed to justify slapping children.

"We should be encouraging parents to love their children, not to hit them, because violence only ever begets violence," Saunders said. "It teaches a child that if you don't get your way, you hit."

*This article has been updated with a correction to the number of commission members traveling to Rome Sunday and with additional information about the intent of the visit.

Victims demand action as Vatican abuse panel gets down to work

When is a priest not a priest? When he’s molesting a child, diocese says in defense of lawsuit

Pope's new abuse commission is another promise waiting to be broken