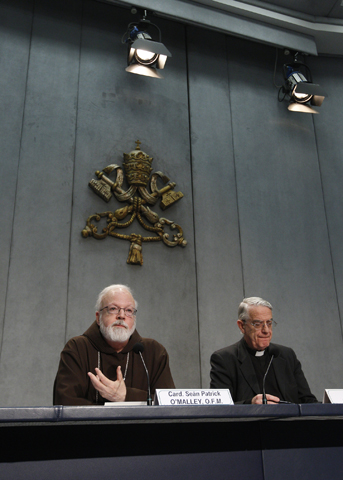 Boston Cardinal Sean O'Malley, a member of Pope Francis' advisory Council of Cardinals, speaks during a press conference Thursday at the Vatican. At the press conference, O'Malley announced that Pope Francis accepted a proposal from the council to establish a special commission on the sexual abuse of children. At right is Jesuit Fr. Frederico Lombardi, the Vatican spokesman. (CNS/Paul Haring)

Pope Francis has ordered the creation of a new commission in the church's central bureaucracy tasked with advising the pontiff on safeguarding children from sex abuse and working pastorally with abuse victims, the Vatican said Thursday.

Boston's Cardinal Sean O'Malley, the lone American serving among the eight cardinals advising the pope on church reform, announced the new group at a press briefing. Creation of the new commission, he said, came at the suggestion of the cardinals' group, known formally as the Council of Cardinals.

While O'Malley said the pope has not determined the specifics of how the commission will function or where it will fit into the Vatican's bureaucracy, the cardinal said it is to be composed of an international range of experts and will focus on the pastoral aspect of the continuing clergy sex abuse crisis.

"Up to now, there's been so much focus on the judicial parts of this, but the pastoral response of the church is very, very important, and the Holy Father is concerned about that," O'Malley said.

"And so we feel as though having the advantage of a commission of experts that would be able to study some of these issues and bring concrete recommendations for the Holy Father and the Holy See will be very important," he said.

The group, O'Malley said, is to include priests, men and women religious, and laypeople.

"All those who are experts in the work of safeguarding children and all those who have been taking care of children" will be considered to serve on the commission, he said.

Announcement of the new commission comes amid news earlier this week that the Vatican had refused to provide information requested by a United Nations committee about how the church handles investigations into sex abuse by priests.

Responding to a July inquiry by the U.N.'s Committee on the Rights of the Child, the Vatican said cases of sex abuse by priests were primarily the responsibility of the world's individual bishops.

Reports of sex abuse have also continued to rock the church in different parts of the world. In the United States, the archdiocese of St. Paul and Minneapolis sent an email to its priests Wednesday warning them that the archdiocese plans to release a new report Thursday that indicates that nearly half of the archdiocese's parishes had a priest accused of abuse assigned to them at one point.

St. Paul and Minneapolis Archbishop John Nienstedt has come under sustained criticism by Catholics in the diocese for not appropriately handling priests accused of abuse.

Asked by NCR Thursday if the new group would also be responsible for making suggestions to the pope on how to handle bishops like Nienstedt who are criticized for not reporting priests who commit abuse, O'Malley said he did not know.

Among the responsibilities O'Malley said the new commission would have is studying present child safeguarding programs "to come up with suggestions for new initiatives" on the part of the Vatican in collaboration with the world's bishops and leaders of religious orders.

The cardinals' group has been meeting at the Vatican since Tuesday and will conclude their sessions Thursday afternoon. The group, which includes prelates from six of the seven continents, met for the first time Oct. 1-3.

The cardinals, Lombardi said, are evaluating the work of each of the Vatican's offices "one by one."

O'Malley said Thursday the cardinals' group had proposed the new sex abuse commission to the pope Wednesday, with the pontiff approving it Thursday morning.

But the idea to create some new commission on sex abuse may have been in the pope's thoughts since at least the October meeting of the eight cardinals' group. A source told NCR following that meeting that the issue had been addressed by the cardinals and to expect the pope to announce some new initiative on the matter.

The next meeting of the cardinals' group will be held Feb. 17-19, Lombardi said Thursday, updating earlier Vatican announcements of a Feb. 17-18 meeting, meaning the group is taking an extra day together in the spring.