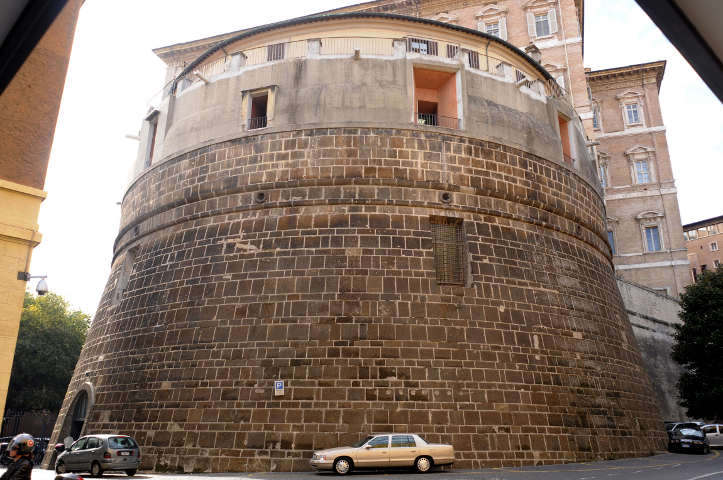 The Institute for the Works of Religion, popularly known as the Vatican bank, is seen in a 2009 photo.(CNS)

In the last few days, Pope Francis created, in a handwritten document, a five-person group to review the operations of the Vatican bank, whose real name is the Istituto per le Opere di Religione, or IOR for short. That group will have its hands full because, you see, Italian authorities arrested Msgr. Nunzio Scarano, a Vatican official, and charged him with attempting to use the Vatican bank as part of a scheme to avoid Italian fiscal control laws. He is currently a guest of the Italian government in Rome's Regina Coeli (Queen of Heaven) prison.

Scarano is in jail because of a reported scheme to use an Italian government jet to bring 20 million euros, owned by some friends of his, from Switzerland into Italy. (One wonders what kind of friends they were who did not want Italian authorities to know about the importation of this money.) Scarano's alleged accomplice, an Italian secret service agent named Giovanni Maria Zito, is also in jail.

The importation scheme fell apart when the fellow in Switzerland who owed the money to Scarano's "friends" failed to pay it, and Zito still demanded his 400,000 euro (about $525,000) "commission" for arranging the transport. Scarano evidently used his personal account at IOR to give Zito a 200,000 euro check as a down payment then reported the check as stolen, at which point things really fell apart.

As it turns out, when he was arrested, Scarano had already been suspended from his Vatican post. He was an accountant in the Vatican department called APSA, the Amministrazione del Patrimonio della Sede Apostolica, or Administration of the Patrimony of the Apostolic See. APSA owns tons of Rome real estate and collects rent from it for the Holy See. Scarano was suspended when the Vatican was notified that he was under investigation for using his Vatican bank account for money laundering in yet another scheme. That scheme involved taking 560,000 euros (about $728,000) from his Vatican bank account, giving 10,000 euros in cash to 56 "friends" in return for checks of 10,000 euros each, then depositing those checks in his Italian bank account. In this way, money was transferred into Italy (just like the jet money was supposed to be) without going through Italian fiscal controls, controls that might ask: How did you get this money and have you paid your taxes on it?

Are you wondering how a monsignor working at the Vatican came to have 560,000 euros in his Vatican bank account? The answer to that question is even more sordid. Scarano solicited the money from friends to build a home for the terminally ill in Salerno, south of Naples. He actually used the 560,000 euros to pay off the mortgage on his own home in Salerno, though now Scarano says he only "borrowed" the 560,000 euros.

No matter how the Scarano affair plays itself out, I have some friendly advice for the new five-person commission who will be reviewing the Vatican bank for Pope Francis: There is no reason for any individual, be he priest, monsignor, bishop, cardinal or pope, to have an account there. As its real name implies, accounts at the Institute for the Works of Religion should be limited only to religious orders or other corporate bodies that actually do works of religion.

Even more reason exists for laypeople not to have accounts there, though quite a privileged number do. What works of religion, in God's good name, are these laypeople doing with the money that they keep at the Institute for the Works of Religion? It is much more likely that their money is parked there for the same reasons Monsignor Scarano parked his money there: for himself and his "friends" to avoid Italian taxes and tax laws.

On Monday, IOR's director and deputy director resigned. No reason has yet been given, but their level of knowledge of Scarano's misuse of his personal account -- and those like him -- at the Vatican bank will bear further investigation.

This is a matter of simple justice. Shops and small businesses are shuttered in Italy. Youth unemployment is at 40 percent. The government does not have enough funds to help get the economy going again. Yet it is estimated that if the Italian government could collect only the taxes due it, there would be no deficit, there would be no austerity program, and life would be better and more fair for those hard-working Italians and those recent immigrants to Italy who only want a chance at a decent-paying job.

There are other things that the new papal commission on IOR could do, but dropping all individual accounts at the Vatican bank would be a good place to start. Rome is full of banks that would happily keep this money on deposit for these individuals and would comply with the tax laws while they are at it.

[Nicholas P. Cafardi is a civil and canon lawyer and a professor and former dean at Duquesne University School of Law in Pittsburgh. Cafardi is a co-chair for the "Catholics for Obama" campaign.]