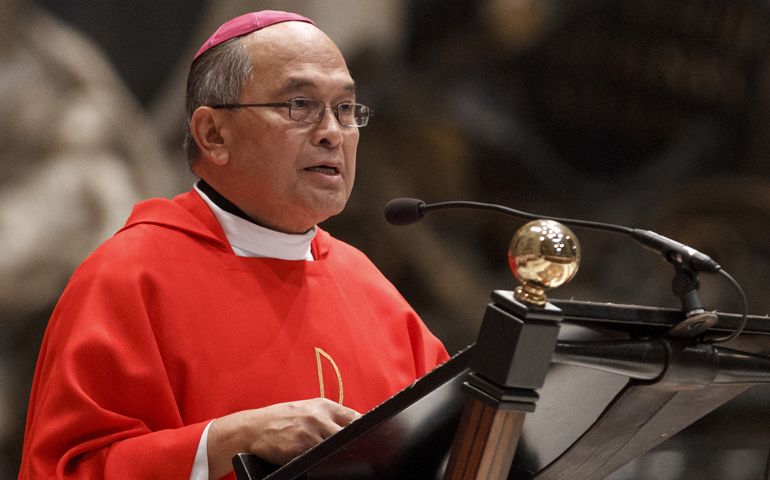 Archbishop Anthony Apuron of Agana, Guam, pictured in a 2012 photo at the Vatican. (CNS/Paul Haring)

The special investigator Pope Francis appointed to look into allegations that the Catholic archbishop of Guam abused altar boys is urging the Vatican to remove the cleric.

In a statement read at services in the island's 26 Catholic churches on Sunday, Archbishop Savio Hon Tai Fai said he was now in Rome and had asked the Holy See to dismiss Archbishop Anthony Apuron and appoint a successor after Apuron refused to stand down voluntarily.

"I can assure you that the gravely serious allegations against Archbishop Apuron will continue to be dealt with by the Congregation of the Doctrine of the Faith, which will hold a canonical trial, " he said, referring to the powerful Vatican department that investigates abuse cases.

"His Holiness, Pope Francis, is monitoring the proceedings."

Francis has pledged zero tolerance for clerical sexual abuse and set up a commission to tackle the issue and ensure the protection of minors.

Hon's statement, also published on the diocese website, was entitled: "Putting the house in order without burning it down."

Francis named Hon three months ago to investigate claims against Apuron, head of the Archdiocese of Agana archdiocese in the U.S. island territory in the Western Pacific.

The allegations date back to the 1970s and involve at least four former altar boys who claim they were molested by Apuron, then a parish priest.

Apuron, 70, who has headed the Guam archdiocese since 1986, has not been charged with any crime.

"On behalf of the church, I want to apologize personally to the survivors of sexual abuse everywhere who have suffered so much at the hands of clergy," Hon said.

Francis temporarily stripped Apuron of his administrative powers in the church in Guam and temporarily replaced him with Hon on June 6.

Hon, who said he was backed by the advisory council of the Agana archdiocese, has presented two letters -- the first asking Apuron to resign and the second calling for the Holy See to remove him.

"We cannot undo the appalling betrayal of trust and faith and the horrendous acts that clergy have committed against the youngest and most innocent among us. We are committed to helping them heal in body and soul," Hon said.

Guam lawmakers recently approved a bill that seeks to remove the statute of limitations on sex crimes. Hon opposed the move saying it would have "damaging and unintended consequences" and expose the church to "unlimited financial liability.

"As happened in thirteen other dioceses in the U.S., the result will very likely be to drive the Archdiocese into bankruptcy," he said.

On his knees, Raleigh bishop asks for forgiveness during reparation Mass