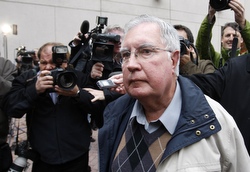 Retired Bishop Raymond Lahey of the Diocese of Antigonish, Nova Scotia, arrives at a police station in Ottawa in 2009. (CNS/Reuters/Chris Wattie)

OTTAWA, Ontario -- Raymond Lahey, the retired bishop of Antigonish, Nova Scotia, who was convicted of importing child pornography, has been laicized by the Vatican, said the Canadian Conference of Catholic Bishops.

A statement on the CCCB website Wednesday said the conference learned from the Vatican that "Raymond Lahey has been dismissed from the clerical state." As such, he loses all rights and duties associated with being a priest, except the obligation of celibacy, said the bishops' statement.

"Raymond Lahey has accepted the Decree of Dismissal, which also requires him to pray the Liturgy of the Hours in reparation for the harm and the scandal he has caused, and for the sanctification of clergy," the statement said.

The 71-year-old former bishop pleaded guilty in May 2011 to charge of possession of child pornography for importation. He was released from prison Jan. 4 after the judge gave him double credit for eight months already served. The judge also imposed a period of 24 months' probation with strict conditions on him.

Allegations cause Minnesota archbishop to remove himself from ministry