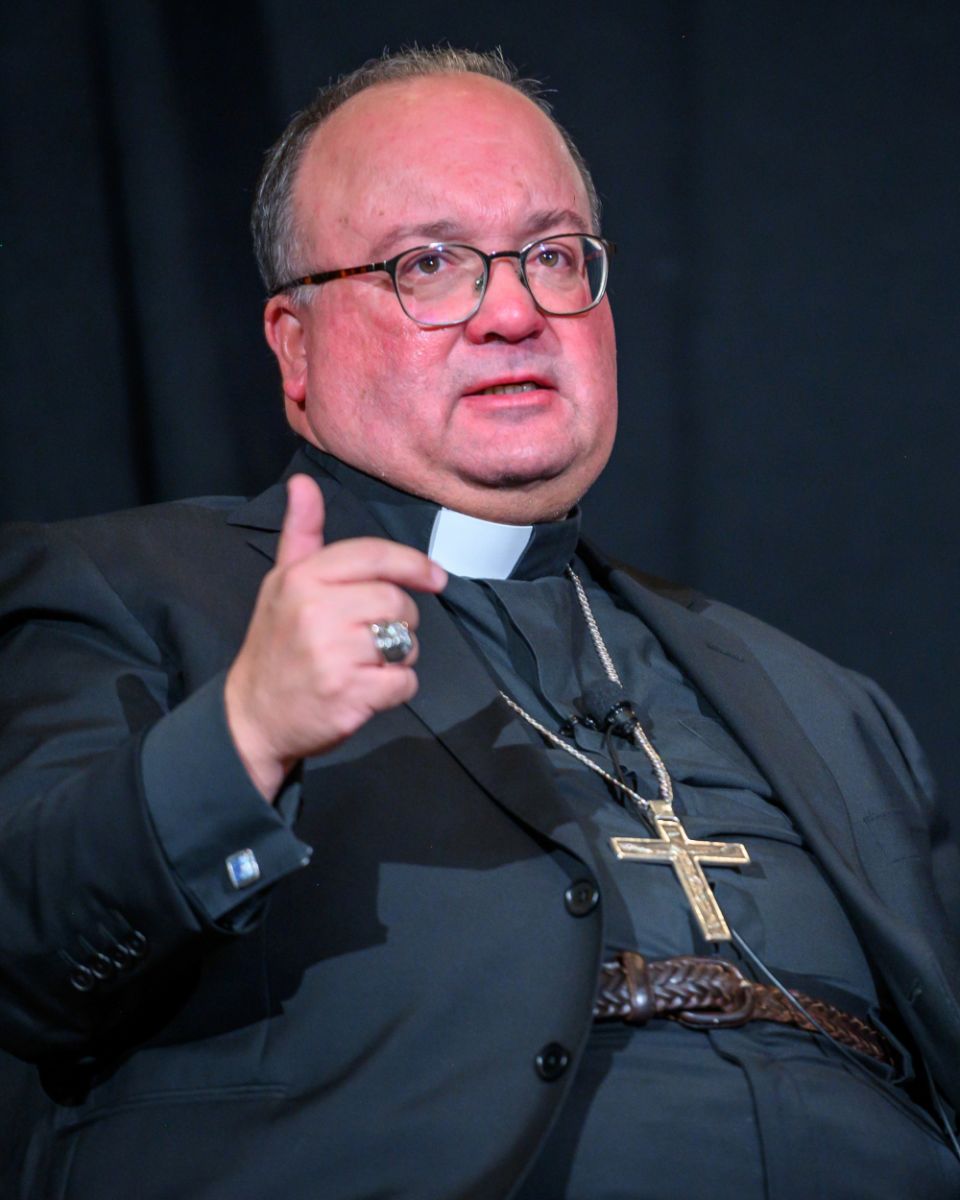 South Bend, Ind. —  U.S. Catholics "have to be prepared for another wave of traumatic narrative" regarding the clergy sex abuse crisis, Archbishop Charles Scicluna said Nov. 13 at the University of Notre Dame.

Scicluna of Malta is adjunct secretary of the Congregation for the Doctrine of the Faith and the Vatican's chief investigator on clergy sexual abuse. He spoke at the University of Notre Dame as part of the school's 2019-2020 forum titled "'Rebuild My Church': Crisis and Response."

The archbishop's remarks were made in a conversational format, in which he first answered questions from moderator John Allen, longtime Vatican reporter and editor of Crux, an online Catholic news outlet. He then fielded questions from the mostly student audience.

Scicluna made his comment about "another wave of traumatic narrative" in response to a question from Allen, who alluded to the 2018 abuse revelations surrounding now-disgraced former U.S. Cardinal Theodore McCarrick.

Dismissed from the clerical state by the Vatican in February, he has been accused of abusing seminarians as a bishop and abusing children early on in his career of more than 60 years as a cleric.

At the forum, Allen acknowledged Scicluna could not comment on the McCarrick case, but he noted that many Catholics wonder if anything really has changed since the U.S. bishops issued their "Charter for the Protection of Children and Young People" in 2002.

Scicluna responded that "it is not the case that the church in the United States has not done what it should do," he said, but "the deficit" of the 2002 charter was that the bishops did not include themselves as possible perpetrators.

He added that the church in United States has done a good job since 2002, "and was a prophetic church in doing so," but, as happened in Pennsylvania, specific reports of past abuse will continue to be revealed.

In that state, after a months-long investigation, a grand jury in Pennsylvania released a report in August 2018 alleging abuse by church workers and claims of a church cover-up in six Catholic dioceses over a 70-year period starting in 1947.

In his job at the doctrinal congregation, Scicluna reviews incoming cases that include the testimonies of the victim survivors of clergy sexual abuse.

"Nothing prepares you for the hurt and the shame you feel, being a priest, when you read the narrative," he said, and this trauma will be shared by the faithful as more information is released about the abuse.

"I tell you from experience, it is not easy reading," Scicluna continued, "and we have to help each other manage the anger, the frustration, the shame one feels on two levels: when we realize how innocent people have been hurt and the effect on the families and communities; but also, at times, the dysfunctional way in which we, the leaders of the church, have reacted to cases."

These stories also will help people understand why there is so much anger on the part of victim survivors, the archbishop said, after describing earlier the "egregious" spiritual as well as physical and psychological harm done to victims by priest abusers. The stories also will help people realize we are all in this together, he said, for when one member of our community suffers, we all suffer.

While it is acceptable to feel anger and frustration about this situation, Scicluna continued, that anger should be transformed into "a determination to get it right; and that each and every one of us needs to give witness to the Gospel wherever we are, because at the end of the day, that will be the way for rebuilding of the church."

He went on to praise steps the church in the U.S. has taken to engage victims and set up independent review boards, audits on child protection and criminal background checks for those working with children. 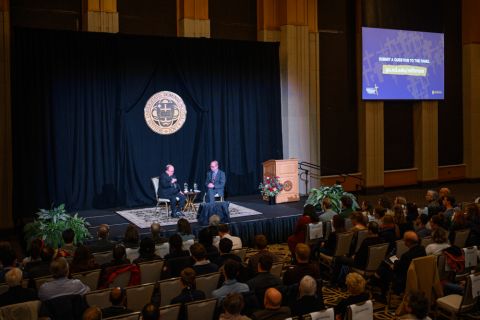 Archbishop Charles Scicluna, adjunct secretary of the Vatican's Congregation for the Doctrine of the Faith, speaks with John Allen, editor-in-chief of Crux, Nov. 13, 2019, at the University of Notre Dame in South Bend, Ind. The Vatican official addressed the sexual abuse crisis in the Catholic Church during a Notre Dame forum. (CNS/University of Notre Dame/Matt Cashore)

Since we are a global church, he continued, the U.S. experience will help the church in other parts of the world. And he noted several times during the evening that the papal nuncios to the various countries should be vigilant in monitoring how well local churches put into place the new directives issued by Pope Francis to combat clergy sexual abuse.

A priest in the audience asked how to handle the feeling of "bereavement," "spiritual emptiness" and "orphanhood" when a cherished spiritual father figure falls.

The church leadership needs to bring people to this maturity in the faith, he continued, or else there will be cult figures who will abuse and hurt the community.

"People who walk away from the church because they are scandalized ... have invested all their emotional loyalty, almost faith, in a human being," but "Jesus has to be the center of faith," Scicluna advised.

When a Notre Dame student asked if there was a connection between clergy sexual abuse and celibacy, the archbishop responded that he could not blame celibacy for the crisis, for if priests followed chastity and celibacy, there would be no misconduct.

"What we are facing here is not only a deficit in the understanding of celibacy, but it is also a betrayal of the commitment done before the people of God," he said.

After reading hundreds of cases of priests failing in celibacy, the archbishop said he realized that most often, the failure was because the man was not in love with Jesus or the people of God; the "soul of celibacy" was not there.

"In order to be chaste in celibacy, you need to be in love: in love with Jesus and with the people of God," Scicluna said.

In going forward, he stressed that in addition to papal and local church regulations, local communities need to be empowered to protect the young and vulnerable, so all Catholics should ask themselves what they can do to be part of the solution to sexual abuse.

Pope heads to Balkans in May to visit Bulgaria, Macedonia

The most important editorial written this week