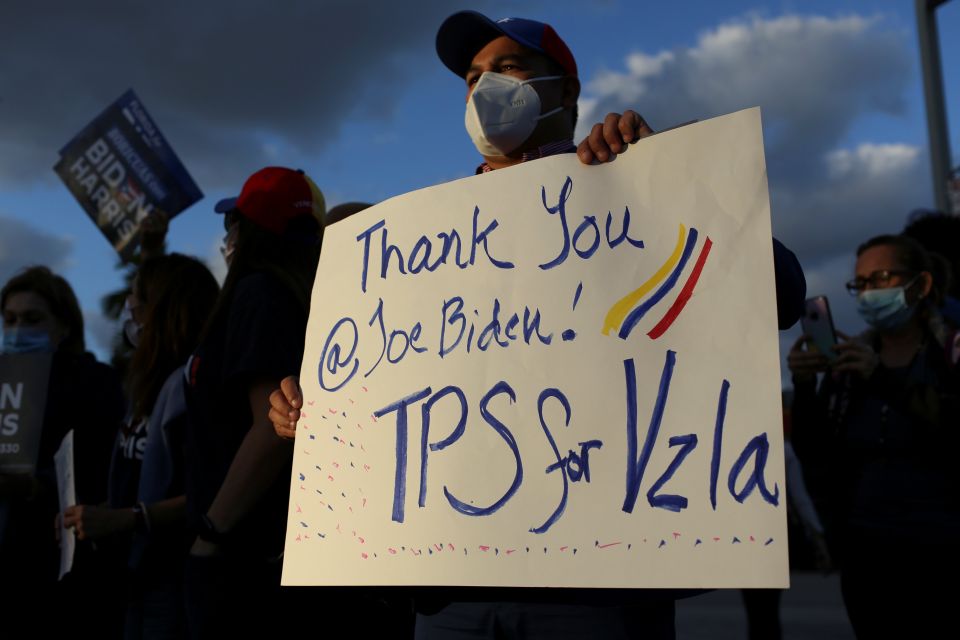 A man in Doral, Fla., holds a sign March 9, 2021, as members of the Venezuelan community react after the Biden administration said it would grant Temporary Protected Status to Venezuelan immigrants living in the United States. (CNS photo/Marco Bello, Reuters)

Washington — Venezuelan Americans in Florida are sending a message to GOP politicians: They can be persuaded to switch political sides for those who favor a path toward citizenship for those with Temporary Protection Status.

During a Sept. 14 online event via Zoom, a poll showing those sentiments was released. The poll was commissioned by the Venezuelan American Alliance, the Immigration Partnership and Coalition Fund, and the Florida chapter of the American Business Immigration Coalition.

Conducted by Integrated Communications and Research, the poll of 500 Venezuelan Americans living in the state of Florida shows where the key swing constituency, with growing power in Florida, stands on a pathway to citizenship for TPS holders, said the Venezuelan American Alliance in a news release.

It also seems to be calling for Republican Sens. Marco Rubio and Rick Scott of Florida to support immigration bills.

"I know the potential contributions that Venezuelans can give to the world, and especially to the countries that host them now that they are living through this catastrophe," said Ricardo Haussman, director of the Growth Lab at Harvard University's Center for International Development.

He is originally from Venezuela and participated in the online event.

Venezuela has been embroiled in political conflict and an economy in a downward spiral that has caused more than 5 million to flee the once rich nation since 2014.

Some 323,000 Venezuelans in the U.S. currently hold TPS status. It grants a work permit and reprieve from deportation to certain people whose countries have experienced natural disasters, armed conflicts or exceptional situations so they can remain temporarily in the United States.

Some who fled have ended up in Florida, where they have organized groups such as the Venezuelan American Alliance to advocate for others.

It'll be good for them and even better for the U.S., if it will allow them to contribute fully into this nation," said Hausmann, an economist.

While many Venezuelans supported President Donald Trump in the past, the poll showed that half of those polled said they were grateful to President Joe Biden after his administration granted a TPS extension to Venezuelans in March, which runs through Sept. 9, 2022. Biden also has said he supports a path toward citizenship.

And while TPS is beneficial, Venezuelan American supporters say beneficiaries "must have certainty that they're going to be able to stay in this country for the long term because, just with certainty, they're going to be motivated to invest in themselves to invest in their children," said Danny Bahar, a senior fellow with the Brookings Institution, who also participated in the Zoom event.

"TPS is a great step to allow immigrants, Venezuelan and from other nationalities, to integrate and contribute, but it is not enough," he said.

The Department of Homeland Security recently announced it was extending the status for TPS beneficiaries from El Salvador, Haiti, Honduras, Nepal, Nicaragua and Sudan until Dec. 31, 2022.

Congress is currently looking at a variety of possibilities that would take TPS holders down a path toward eventual citizenship.

The House Judiciary Committee approved language Sept. 13 for inclusion in the budget reconciliation bill that could provide a pathway to eventual citizenship for TPS holders, among other immigrants.

Auxiliary Bishop Mario E. Dorsonville of Washington, who is chairman of the U.S. Conference of Catholic Bishops' Committee on Migration, lauded the move in a Sept. 15 statement.

"For decades, the bishops of the United States have been proponents of such reforms, which promote integration and family unity," he said. "We cannot persist in relegating these members of our society to the margins, especially when we simultaneously depend on so many of them for our collective well-being."

To escape abusive marriages, many Christians in Pakistan convert to Islam