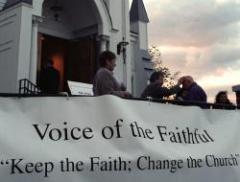 In this 2002 file photo, Voice of the Faithful sponsor a Mass for healing for all Catholics and those sexually abused by clergy at St. John the Evangelist Church in Wellesley, Mass. (CNS photo)

BOSTON – Some 450 members of Voice of the Faithful gathered in Boston yesterday (Sept. 14) to mark their 10th anniversary with a conference that featured new calls for deep structural reforms in the church, including lay input on the selection of bishops and ordination of women at least to the diaconate, if not to the priesthood and episcopacy as well.

“Your voice is uniquely American and it is uniquely Catholic,” said Illinois Supreme Court Justice Anne Burke, keynote speaker at the opening dinner.

Burke, a former chairwoman of the all-lay National Review Board the bishops formed in 2002 to oversee its progress in combating clergy sexual abuse and promoting the protection of children, said the job of doing that is far from over.

“Without your voice, here in the United States everyone’s freedom as a Catholic would be even more threatened. Everyone’s liberty as a disciple would be more contained. We never needed you more,” she said.

“The formation of the Voice of the Faithful established a new American vocabulary for the truth,” she said.

“I think you’re not shy about speaking to power,” she added. “We have shed those layers of Old Europe, of class and place where people, especially peasants, were expected to be silent. They were never expected to voice their opinions. In our America, everyone has a voice and a vote, plus the opportunity to use our voice. It is a natural extension of our Yankee personality, and for it we need never apologize.”

“We ask questions. We want the truth. We will not take no for an answer,” she said. “We have little use for the courtly manners of the [Roman] Curia.”

VOTF was formed in Boston in 2002 following the shocking revelations that dozens of priests of that archdiocese had been sexually abusing minors for years and archdiocesan officials had covered it up, sometimes quietly sending a priest to counseling before returning him to parish or other pastoral duties, and sometimes simply transferring him to another parish.

What started as a local group of some 300 active Catholics seeking change and accountability soon grew into a wider movement that now counts about 30,000 members nationwide.

In opening remarks VOTF president Mark Mullaney summarized the focus and work of the organization over the past 10 years: “Throughout these years we’ve worked to support survivors of clergy sexual abuse, we’ve worked to support priests of integrity, and we have endeavored to bring about structural change in the church to make sure that such scandals will not occur again and to reclaim our rights as the people of God.”

Over the next 10 years, he said, VOTF will continue to support abuse survivors and work for “a further understanding of the clerical culture, what it is and how it affects us, women’s rights in the church beginning with restoration of women’s diaconate and continuing with equal rights for women, priests, in terms of married priests and continuing to deal with the shortage of priests, and to reach out to the priests in associations being formed throughout the world … financial responsibility … and finally, lay input into bishops’ selection.”

Ten years later “we are no less committed to healing the wounds of our beloved church,” he said.

Burke said that “as Catholics, we know that the light of faith is far and away more important than our failed leadership or our institutional structure’s inability to … share leadership, authority and equality.”

She sharply contrasted the events of the Second Vatican Council 50 years ago with today’s “reformers of the reform,” who she said “seek to do the inconceivable, to turn back the hands of time.”

Citing what she referred to as recent Vatican assaults on U.S. women religious, a new “obsession with rule-making,” marginalization of women and other issues, she said, “The DNA appears to be stranger and stranger. … How much can we endure?”

Recalling the late Chicago Cardinal Joseph Bernardin’s public efforts to develop common ground among Catholics, Burke said, “Put an end to the [current] bishops’ passion for a culture war – even if they have to live through four more years of Obama’s presidency.”

“If bringing the church back to the 1950s is the goal, few people of faith will follow,” she said. “We’ll just stick with Jesus.”

[Jerry Filteau, NCR Washington Correspondent, is in Boston covering the Voice of the Faithful conference. His e-mail address is jfilteau@ncronline.org.]