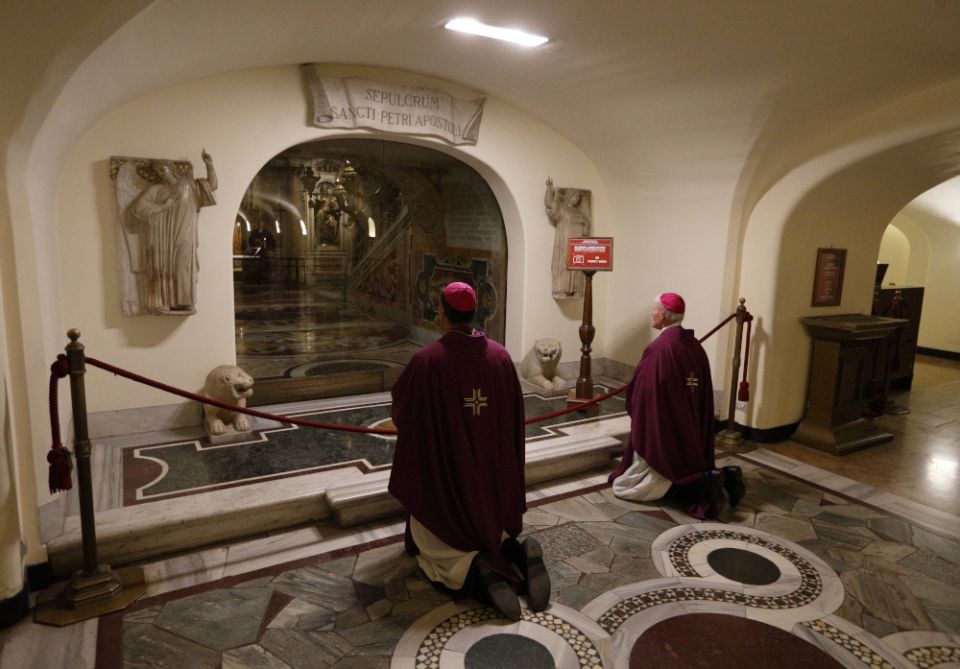 Bishop Mark Brennan of Wheeling-Charleston, W.Va., right, and an unidentified bishop pray in front of the tomb of St. Peter after U.S. bishops from the District of Columbia, Delaware, Maryland, Virginia, the U.S. Virgin Islands, West Virginia, and the Military Archdiocese concelebrated Mass in the crypt of St. Peter's Basilica at the Vatican Dec. 2, 2019. The bishops were making their "ad limina" visits to the Vatican to report on the status of their dioceses to the pope and Vatican officials. (CNS/Paul Haring)

Rome — Tasked with finding ways his predecessor should make amends for abuses, including gross financial misconduct, Bishop Mark Brennan of Wheeling-Charleston, West Virginia, was able to meet with a top Vatican official to discuss those plans.

"I was able to at least get a good meeting with the cardinal prefect of the Congregation for Bishops, Cardinal Marc Ouellet," he told Catholic News Service Dec. 3.

"It was a good discussion," he said. Archbishop William Lori of Baltimore, who had been appointed by the Vatican to investigate the situation in the diocese before Brennan was appointed, also was part of the discussion, "so I think we had some good conversation about that matter."

Brennan was one of nearly 40 bishops in Rome for a regularly scheduled series of meetings with the pope and Vatican offices as part of the U.S. bishops' "ad limina" visits Dec. 2-6. The bishops were from U.S. Regions IV and V – District of Columbia, Delaware, Maryland, Virginia, U.S. Virgin Islands, West Virginia, Archdiocese for the Military Services, Louisiana, Alabama, Kentucky, Mississippi and Tennessee.

Brennan said he had been "anxious to be able to present my conclusions" about how his predecessor, retired Bishop Michael Bransfield, could make amends for the harm done to the diocese and its people.

Bransfield, 76, left his position in September 2018 under a cloud of allegations of sexual and financial misconduct. He had led the diocese for 13 years.

Pope Francis accepted Bransfield's resignation after determining allegations of sexual abuse and excessive financial expenditures were credible and substantiated. The pope subsequently restricted Bransfield from presiding or participating in public celebrations of Mass as a priest or bishop and ordered that he not live in the diocese.

Lori served as apostolic administrator from the time of Bransfield's resignation until Brennan, 72, was installed Aug. 22, 2019.

Brennan told CNS that "the pope had asked me, told me, to be involved" in drawing up ways his predecessor might "go about making amends" for his misdeeds.

Brennan announced his nine-point "plan of amends" Nov. 26 in a letter he sent to the people of the diocese. He asked the former bishop to pay back more than $792,000 to cover the "inappropriate expenditure of diocesan funds to support a luxurious lifestyle" as well as to apologize to the people he is alleged to have sexually abused, to the faithful of the diocese for "the grievous harm he caused," and to diocesan employees "who suffered from a culture of intimidation and retribution which the former bishop created."

The plan covers several other measures, including a reduction in his diocesan pension, the loss of certain aspects of health care coverage and denial of burial in the diocese.

Lori told CNS that what happened in Wheeling-Charleston "was not actually a subject" addressed during the group's meeting with the pope Dec. 3, "but I think it is obviously on everybody's mind."

"Bishop Brennan is doing an amazing job," he said. "I had a little experience in West Virginia – I was a part-timer and short-timer – but he has really gotten himself all around the state and he's gone with great simplicity and great interest.

"He's inherited a very difficult situation, but I think people sense his sincerity and goodness and his desire to help the diocese confront the past and confront it thoroughly, but also to move on," he said.

Lori said he accompanied Brennan to the meeting with Ouellet "in a supportive role, as the metropolitan" of the church province to which Wheeling-Charleston belongs.

Brennan told CNS that, given the large number of bishops at the meeting with the pope, he was not able to make a comment or ask a question directly.

But, he said, the bishops who spoke did bring up a number of issues of concern and importance to all of them, including "the scandal that we've been dealing with in the United States" and how "helpful to us" they've found the pope's 2019 document, "You Are the Light of the World," which establishes norms for fighting abuse and holding bishops and religious superiors more accountable.

Lori told CNS Dec. 4 that as the bishops go to "the threshold of the apostles" and meet the pope and his closest collaborators, "you bring not only yourselves, but you bring your concerns, your worries, your problems, the situation of the church that you are striving to lead and serve; you bring the concerns that your priests have expressed to you and your people have expressed to you."

Brennan said that the bishops also described to the pope their region, the Appalachian Mountains and "our concern to stop the degradation of the physical environment and to promote the health and well-being of the people."

They also discussed racism, immigration, how to reach "the nones," or those who say they believe in no religion, Brennan said.

"It was very it was a good discussion," he said. "It was fascinating."