by Pat Marrin
This article appears in the Immigration and the Church feature series. View the full series. 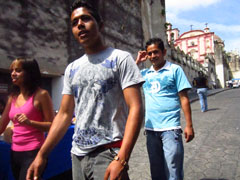 I just returned from eight weeks in Cuernavaca, a paradise just south of Mexico City, famous for its weather, its year-round profusion of flowers and its historic role as a portal for thousands of missionaries and college students on their way to Central America.

I lived with a host family and took Spanish classes at the school founded by Ivan Illich, the influential social critic of the 1960s and ’70s. I went south to immerse myself in a river of language flowing north to water the life and culture of the United States, including the church, now nearing 40 percent Latino membership. I went to Mexico to understand the complex forces driving migration and to find out whether the one baptism and Communion shared by Christians everywhere are stronger than the many borders that divide us. I went in search of the face of Jesus, the stranger who always reveals the future. I came home stuttering beginner’s Spanish (though my wife says I speak it fluently in my sleep) and eager to continue the journey.

Despite its beauty and vitality, you cannot go to Mexico without also feeling the global instability and the post- 9/11 anxieties that make walls between neighbors who have always needed and resisted each other.

Drug trafficking violence, magnified by media coverage, is causing real anguish in Mexico, not just for its many innocent victims, but also because it has threatened investment and tourism. Drug money has corrupted the political system at a time when other pressing social problems need to be addressed A crisis in education and job growth has left a generation of Mexican youth without direction. The narco war is now interwoven with the flow of immigration from Central America through Mexico to its northern border. The suffering this has caused is a plague upon the poor, a threat to national security, and a source of growing tension between Mexico and the United States.

These are complex problems, but some things are clear. Drug consumption and gun sales in the United States are killing thousands of innocent people in Mexico. Americans who participate in this trade, no matter how far up the chain or distant from the point of sale, are complicit in the deaths of people they will never see.

Fear of violence has hurt all the language schools and cultural immersion programs that were once an economic mainstay for Cuernavaca, which has welcomed thousands of American college and high school groups. A recent cover of TIME magazine with a picture of crosses in the desert is one more signal to visitors to stay away from Mexico, though many places are safer than many American cities.

Back in Kansas City, Mo., I find the results of what I saw in Mexico: thousands of undocumented Mexicans who have made the perilous journey north to find work so they can send money home for their children to go to school, eat, live in a secure home. The economics of cheap labor means shelves here are filled with products made in other parts of the world where wages are low and environmental laws are weak. U.S. complicity in Mexico’s woes is clear. NAFTA rules that allowed Iowa corn to flood Mexican markets undercut local suppliers and pushed thousands of campesinos off land now growing crops for export. They go to the cities, already crowded with people willing to do any kind of work to survive. Or they come north.

When in Mexico I tried to imagine at times that I was not a tourist, and there were moments when I stopped observing and entered the flow, just one more human being dependent on others to find my way. One of the more valuable lessons of being in another country is dependency on the kindness of strangers, though, in fact, I was the stranger. My son, a fluent Spanish speaker who has lived in El Salvador and now works with migrant farm workers, affirmed this lesson. “Now you know, Papa, what it feels like for all the new arrivals in the United States, struggling to survive, grateful for any sign of welcome or respect.”

Community is the web that holds all our lives together. In Mexico, as everywhere, each person has a name, a family, needs work to do, a school to go to, a bed to sleep in. For a moment, lost in the city or on the wrong bus, I was among them, one of them, grateful beyond words for ordinary human kindness.

It was on the bus each day to and from class that I passed a spot where construction materials were sold. Next to the road was a pile of dirt and a man who shoveled it into bags. He was there every day, even in the rain; he looked as though he might live there. His hair and clothes were the color of the earth he was putting into the bags. I thought to myself: “Who are you? What do you think about all day? What circumstances brought you to this job, this existence? ¿Que pasa?”

A passing encounter, yet I imagined it repeatedly. What if he had looked back at me, invited me off the bus, invited me to come closer, his face the face of Jesus. What if the distance and the great disparities between our worlds had suddenly disappeared. What if he had said to me, Hola, mi hermano. Hello, my brother. ¿A dónde vamos desde aquí? Where do we go from here?

New book on immigration and children

'You are not alone,' Hispanic bishops tell undocumented immigrants