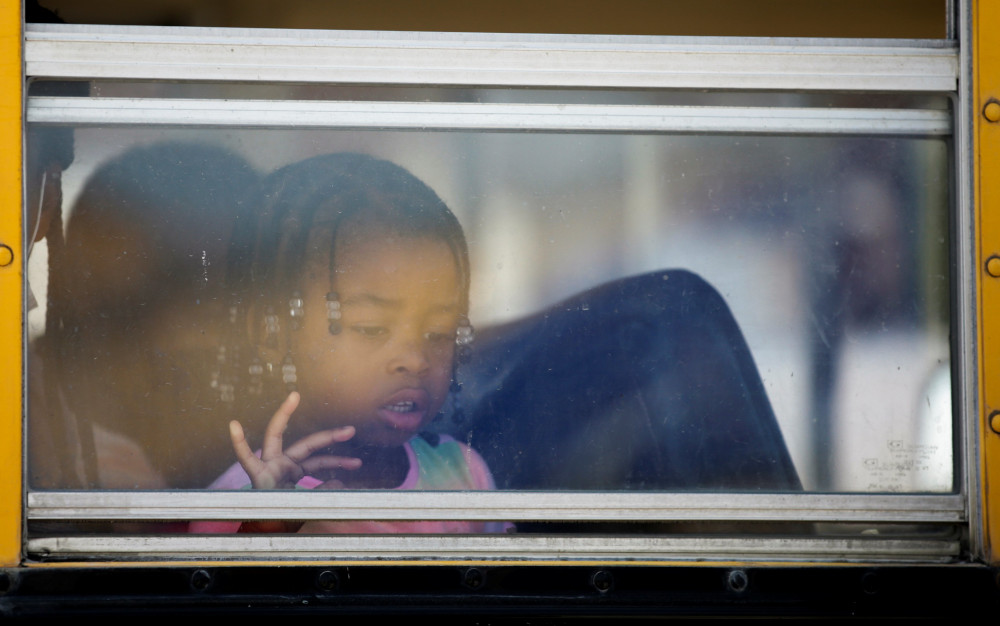 A Haitian migrant girl looks through a bus window before being transported with her relatives to the Reynosa-Hidalgo International Border Bridge after being admitted into the U.S., with legal assistance, at the Senda de Vida Shelter in Reynosa, Mexico, May 23, 2022. Citing a continued worsening humanitarian crisis in Haiti, the Biden administration announced Dec. 5 it would allow more Haitian migrants already in the United States to apply for Temporary Protected Status, or TPS. (CNS photo/Daniel Becerril, Reuters)

Homeland Security Secretary Alejandro Mayorkas Dec. 5 announced a redesignation of Temporary Protected Status for Haiti and an extension of TPS for Haitian migrants already residing in the United States for an additional 18 months, from Feb. 4 through Aug. 3, 2024.

He said this "much-needed humanitarian relief" for Haitians was compelled by current conditions in Haiti such as "socioeconomic challenges, political instability, and gang violence and crime -- aggravated by environmental disaster."

Mayorkas' decision came "after consultation with interagency partners and careful consideration of the extraordinary and temporary conditions in Haiti," said a news release from the Department of Homeland Security.

It said the Caribbean nation has endured a prolonged political crisis, as well as "grave insecurity and gang crime that worsened a dire economic situation; a lack of access to food, water, fuel and health care during a resurgence of cholera; and the recent catastrophic earthquakes."

Executive director Gustavo Torres of CASA, an immigrant advocacy organization in Hyattsville, Maryland, said the Biden administration's decision "restores security to our Haitian brothers and sisters that their lives here in the United States will not be uprooted nor that they will be separated from their families."

"As we celebrate this win, we will continue to shed light on the millions of migrants still waiting on TPS designation for their countries," Torres said. "The fight for immigrant justice continues as the fate of DACA holders and DACA-eligible youth hangs in the balance."

He added, "We will not rest until the Deferred Action for Childhood Arrivals program and other protections are provided for the millions of immigrants that have built lives in this country."

DACA was authorized by the Obama administration in 2012. It protects young adults brought into the country illegally as minors -- giving them a reprieve from deportation and allowing them to get the documents they need to work and drive.

But in October of this year, a three-judge panel of the 5th U.S. Circuit Court of Appeals in New Orleans affirmed a lower court's ruling last year that said the Obama administration did not have the legal authority to create DACA in the first place.

The appeals court did not say the program had to completely shut down or stop processing renewal applications, but it left in place last year's order from Judge Andrew Hanen of the U.S. District Court for the Southern District of Texas. He ruled DACA could continue only for current recipients with no new participants.

The Washington Post was the first to report Dec. 5 that two members of the U.S. Senate are working on a bipartisan framework for immigration reform that would allow a pathway to citizenship for the DACA recipients, known as Dreamers.

According to the Post, the framework proposed by Sens. Kyrsten Sinema, D-Ariz., and Thom Tillis, R-N.C., also provides for:

-- $25 billion to $40 billion in increased funding for Border Patrol and border security, "including a commitment to hiring more agents and increasing their pay."

-- An extension of Title 42 until a formal plan is in place to stop an expected surge of migrants at the border. The public health rule has allowed U.S. authorities for health reasons to expel more than 1 million migrants who illegally crossed the U.S.-Mexico border. Under the proposed framework, the law would remain in effect for at least a year, while processing centers are set up.

-- An overhaul of the asylum system "to prevent abuse of the law."