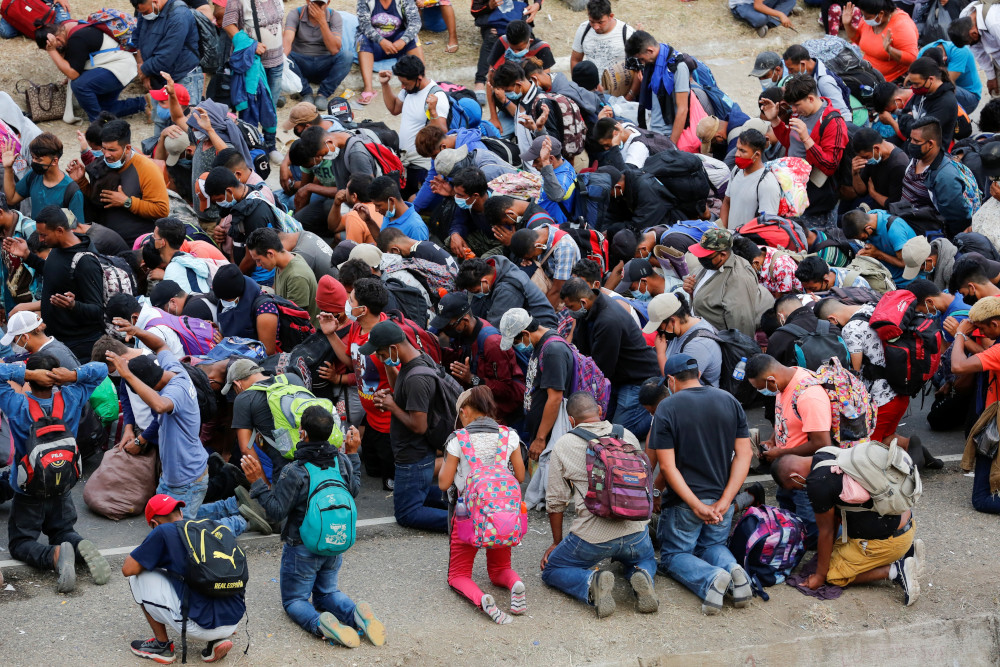 Fr. Noel Ortíz helped parishioners in northern Honduras with food and housing — and turned his parish into an impromptu shelter for their pets — after twin hurricanes struck Central America twice in just two weeks in November.

He also listened to their frustrations as floods wiped out their homes and livelihoods and government officials provided little assistance for rebuilding. Many in his parish of garment factory workers in the gang-ridden city of Choloma mused about migrating and jumped at the chance to join caravans leaving the country.

"It's not a surprise," he said of the caravans. "They're the effects of the hurricanes that came and detonated the collapsed system we have in Honduras."

The twin hurricanes compounded the misery of the COVID-19 pandemic, which drove millions to economic despair and left many with a sense of hopelessness as government responses were plagued by ineptitude and corruption. Perceptions that politicians were worrying more about the 2021 elections than rebuilding the country only reinforced the sense of abandonment, according to observers.

Two large caravans have departed since Hurricanes Eta and Iota soaked Central America, provoking widespread flooding and homelessness and claiming more than 250 lives. The caravans set out from San Pedro Sula, Honduras' second-largest city, and, in January, swelled in size to more than 7,500 travelers. Both caravans were broken up by security forces before reaching Mexico.

But the formation of caravans and the desperation to leave reflect the rough realities of life in the northern triangle countries of Central America: Guatemala, Honduras and El Salvador.

The desperation was already deep due to the pandemic; then the hurricanes arrived. A survey of migrants tended to by shelters in Guatemala between October and December found 90% of respondents had left their homes for economic reasons, according to a Feb. 12 report by the Guatemalan bishops' migrant ministry and the Danish Refugee Council. 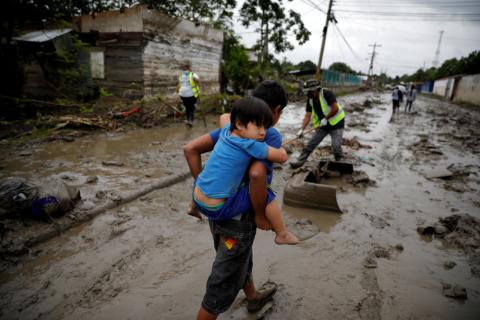 A child in La Lima, Honduras, carries his brother in a street covered in mud Dec. 8, 2020, after flood waters caused by Hurricanes Eta and Iota receded. (CNS/Reuters/Jose Cabezas)

U.S. Customs and Border Protection reported nearly 78,000 arrests on the southwestern border in January 2021. That was more than double the numbers of one year earlier, and the U.S. officials attributed it in part to hardships in Central America and "inaccurate perceptions of shifts in immigration and border security policies."

Those perceptions pertain to the inauguration of a new president in the United States, something Catholics working with migrants in Central America differ over as a motive for heading north.

"[There's] a mass exodus of people with [the] illusion of reaching the United States under this new president [Joe] Biden — with the illusions that he will open the doors to the United States for Central American migrants," said Franciscan Fr. Gabriel Romero Alamilla, director of the migrant shelter La 72 in Mexico's southern Tabasco state.

"People are no longer scared of being infected [with COVID-19.] They're not scared of dying in a pandemic. They're choosing between dying of hunger or dying without work or dying without land or being massacred — or they're [choosing] to search for a destination with a more hopeful future," Romero said.

Rick Jones, a former migration adviser to Catholic Relief Services in El Salvador, told Catholic News Service, "People are leaving based on what's happening on the ground and they figure: We'll face the border and anything else when we get there."

He added, "The state of exception that was created under COVID has also led to major corruption in all three countries: El Salvador, Honduras and Guatemala. All three governments have been accused of major league corruption. People just get desperate at that point."

Biden has promised to overhaul U.S. immigration policy. He has signed a series of executive orders on immigration and started to undo policies implemented by his predecessor, Donald Trump. His office has also warned migrants that now is not the time to come to the United States.

"There are positive signs. But it's cautious optimism for us," said Jesuit Fr. Ismael Moreno, director of Radio Progreso in Honduras. "We have a good opportunity with the new U.S. administration to open spaces for dialogue that we didn't have before."

Governments in the region — especially in Guatemala and Honduras — have dismantled anti-corruption efforts previously backed by the United States, and they went along willingly with initiatives to stop immigration and sign safe third-party agreements recently abandoned by Biden.

The Trump administration "cut off foreign aid to Central America, they removed support for the anti-corruption effort ... which was actually working, and that sent a message to people: Help is not on the way and your only option is to leave," Jones said.

"We need to be thinking that development and migration go together. It's not just about stopping the flow of people," he said.