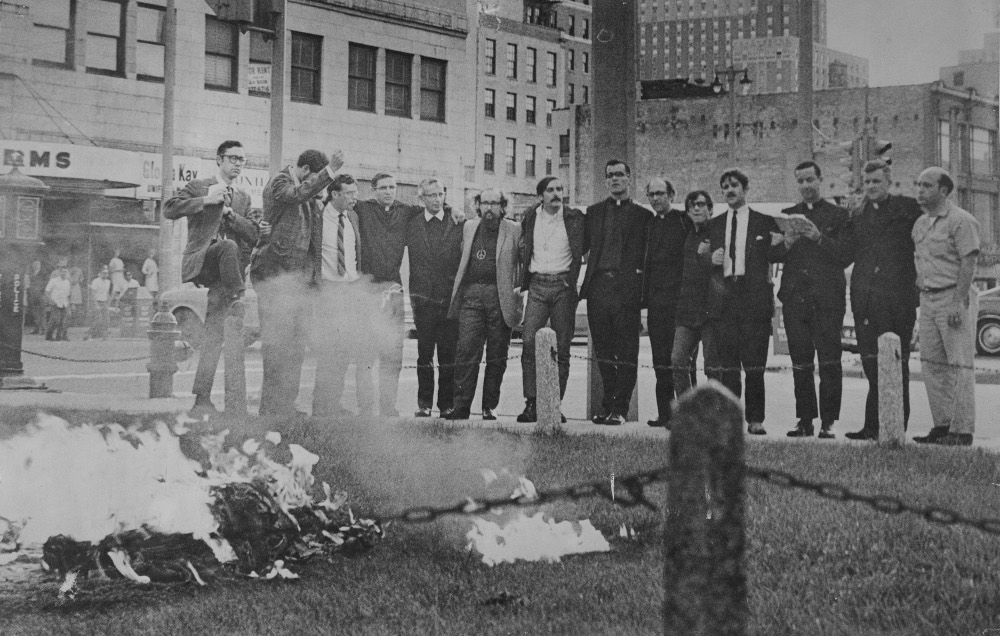 Protesters known as the Milwaukee 14 watch draft files they had set on fire with homemade napalm as they pray Sept. 24, 1968. Surviving members of the action insist that what they did to prevent young men from being inducted into the military was right. (CNS/Gary Ballsiper, courtesy Department of Special Collections and University Archives, Marquette)

Fifty years ago in an act of civil disobedience, Bob Graf and 13 of his friends broke into nine neighboring draft boards in a Milwaukee office building, grabbed thousands of 1-A records of men about to be called up, doused them in homemade napalm in a nearby park and set them afire.

As dark filled the sky above downtown Milwaukee, they sang and read from the Gospels, waiting for police to arrive.

"It was just very natural for me," Graf, 75, who studied for seven years with the Jesuits, said of the anti-Vietnam War action as the Sept. 24 anniversary approached. He said it was his Jesuit education that caused him to follow his conscience.

"You do these things because you feel there's no alternative but to do it," participant Jim Forest told Catholic News Service.

"It seemed like a good way to reach folks," offered accomplice Doug Marvy, 77, who said his motivations were purely political rather than for reasons of faith.

The group, which included five priests, became known as the Milwaukee 14. Twelve of the 14 were charged with burglary, theft and arson to property and served at least a year in prison.

"The abolition of war is actually something that is worth trying to achieve," said Forest, 76, who now lives in the Netherlands. "Like many people who thought it was crazy to think of society without slaves, it's the same for thinking about war today."

The Milwaukee protest came within a year of two earlier high-profile actions that spawned a long series of more than 290 protests at draft boards, military offices and corporations involved in the war effort around the country.

The first such protest actually occurred in spring 1966 when 19-year-old Barry Bondhus broke into his local draft board in Minnesota and dumped two large buckets of human feces into a filing cabinet containing hundreds of 1-A records. But his action — called the Big Lake 1 — got hardly any media notice. For his protest, he served 18 months in prison.

Then came the more high-profile Baltimore 4 of Oct. 27, 1967, and the Catonsville 9, outside of Baltimore, on May 17, 1968. Then-Josephite Fr. Phil Berrigan was involved in both; his brother, Jesuit Fr. Dan Berrigan, joined in the second with seven other Catholics. Each protest sought to stop — at least symbolically — the military induction of young men who, they believed, were being led to slaughter for an unjust cause.

The Catonsville Nine were nine Catholic activists who burned draft files to protest the Vietnam War. On May 17, 1968, they entered a draft board in Catonsville, Md., took 378 draft files, brought them to a nearby parking lot and set them on fire with homemade napalm. (CNS/www.catonsville9.org)

Participants in such actions were largely Catholic and part of what was billed as the "Catholic Left." The protests were based in biblical nonviolence in an effort to turn the country from war. They responded to arguments that their actions were in fact violent, saying that their faith motivated them to act to prevent a greater evil from occurring.

For Forest, the action was something he did not hesitate to undertake. He had co-founded the Catholic Peace Fellowship, which counseled young men on how to become conscientious objectors. The organization still exists and offers practical and pastoral support to military and veterans who struggle with the contradiction between their participation in war and their consciences.

Talking with the young men "made the draft and its consequences very real," Forest said.

He had been a meteorologist in the Navy before he took to embracing nonviolence. He was assigned to the Navy's weather service headquarters outside of Washington and worked on the weather prediction for the CIA-inspired Bay of Pigs invasion in Cuba in 1961. That troubled him and later he learned of a peace vigil organized by the Catholic Worker movement in the capital and joined it — not wearing his uniform, of course.

Word got back to Forest's commanding officer and he "got into a lot of hot water." Forest was discharged as a conscientious objector.

Forest heard about planning for the Milwaukee action from George Mische, a participant at Catonsville. Mische had been traveling the country recruiting others to join draft board protests.

Mische told CNS he joined the anti-war movement following his time as a foreign diplomat in the State Department. He said he had grown concerned about U.S. policy in Latin America that supported dictatorships rather than democratic movements. When he saw a similar policy taking shape in Southeast Asia he knew he had to act and rooted his activism in his Catholic faith.

"People were chomping at the bit all across the country to do something meaningful that had an impact to change public policy," recalled Mische, a U.S. Army veteran. Entering draft boards and destroying 1-A records was something that "anybody" could do, he said.

"The real untold story is the people who came out of the walls for several years and were equally as credentialed as us," Mische said.

Marjorie Melville, 89, is the only other remaining participant in the Catonsville action. A former Maryknoll sister, Melville had ministered in Guatemala from 1954 until 1967 when she was expelled for involvement in the "internal politics" of the country for her work with university students on labor and literacy. She met her husband, Tom, a priest at the time, in the country. They left religious life to marry in 1968 and settled in Washington, joining the burgeoning Catholic peace movement in the nation's capital.

She said the decision to join the Catonsville witness stemmed from her experiences in Guatemala as she witnessed the disastrous effects of U.S. policy on the country's poor people and the parallels she saw in Southeast Asia.

"It really was an opportunity," she said of the discernment the couple took to join the draft board protest. "We felt relief at being able to say something about war. This gave us a platform from which to address the issues."

"I'm glad we did it," she added. "It's not something that can be done now because there's no draft. But certainly the need to bring attention to U.S. war-making is crucial."

Despite the nearly 300 draft board actions and the massive, sometimes violent, anti-war protests that erupted in 1968 and continued for years, Marvy said he doubted that U.S. war policy was hindered until the soldiers themselves began resisting years afterward.

Marvy planned to join a reunion of most of the eight surviving members of the Milwaukee 14 Sept. 21-23. True to their deeply held beliefs, they and modern-day supporters and activists will hear from speakers addressing 1968's events, protests and political action today and how to engage what they see as a more complacent public despite continuing innumerable injustices.

"We'll try to bring that spirit back to an active life today," Graf said. "And we'll celebrate that spirit of nonviolence."