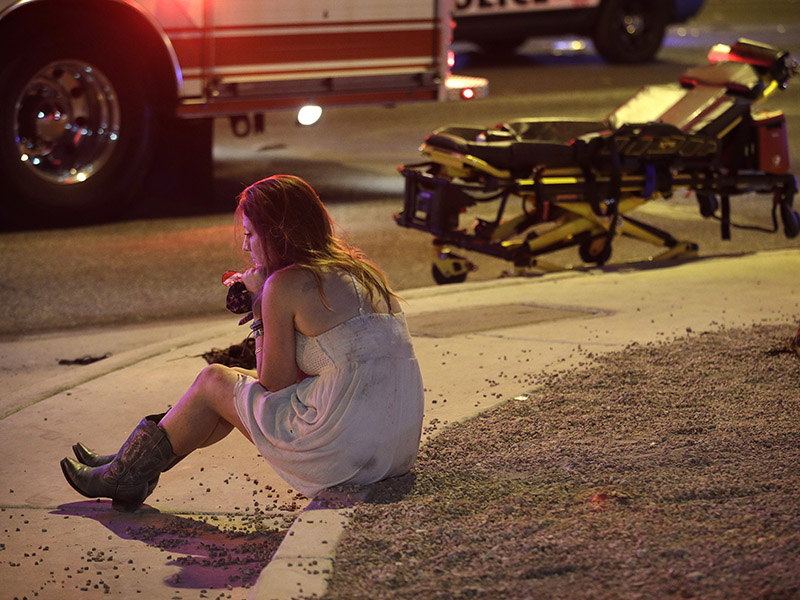 As the nation reels from the latest mass shooting, religious and secular leaders are offering prayers and some are calling for stronger action on gun control in light of the deaths of dozens and wounding of hundreds in Las Vegas.

"My heart and my prayers, and those of my brother bishops and all the members of the Church, go out to the victims of this tragedy and to the city of Las Vegas. At this time, we need to pray and to take care of those who are suffering. In the end, the only response is to do good — for no matter what the darkness, it will never overcome the light. May the Lord of all gentleness surround all those who are suffering from this evil, and for those who have been killed we pray, eternal rest grant unto them, O Lord, and let perpetual light shine upon them."

Rabbi Rick Jacobs, president of the Union for Reform Judaism

"We mourn those callously slaughtered in Las Vegas and pray for the wounded. But our prayers must be followed by action, long overdue limits to the easy access to fire arms. Common sense measures, like restricting the use of silencers that make a shooter harder to locate and stop, must prevail. Yet we know that instead, Congress is planning to vote on the SHARE Act, which, among other misguided provisions, allows purchasers of silencers on the internet or at gun shows to forgo a background check. This bill must not be allowed to become law. Human lives, like those taken overnight in a horrific burst of violence, depend on it."

"Deeply saddened to learn of the shooting in Las Vegas, Pope Francis sends the assurance of his spiritual closeness to all those affected by this senseless tragedy. He commends the efforts of the police and emergency service personnel, and offers the promise of his prayers for the injured and for all who have died, entrusting them to the merciful love of Almighty God."

"This is not a time for politics, but for prayer. This is not a time for division, but for divine solicitation. We join our hearts, we all take our knees and we pray with all of our might for peace for the families of those whose lives have ended in this tragedy, and for all of those who are still fighting for their next breath. The NHCLC has summoned our entire network of thousands of churches to commit concerted time of prayer in light of this tragedy."

"I am praying for every victim, family member, friend and the community of Las Vegas grieving from this horrific act of evil. May you feel the love of God and all of us standing with you in the midst of such pain and turmoil. Sadly, the Orlando community especially knows how to grieve with those who grieve and mourn with those mourn. You have our strongest support, Las Vegas — every ounce of love and care we have is yours."

"Prayers appreciated for the victims of the mass shooting in Las Vegas. There is evil among us."

"Tragedies like this remind us of the brevity of life and the hope of the Gospel. In moments of pain like this one, the worst mass shooting in our country’s history, America needs God as ever before, and those families affected by this tragedy need more love than ever before. I am calling upon our entire network of churches, those affiliated with Harvest Crusades and Christian leaders all across America, to step up by bending down on their knees in intercession for our nation during this time of national grief.”

"While we take the time to heal and mourn, we must also act to stop the plague of gun violence. We call upon all Americans to work together, across party lines, to strengthen and expand gun control laws and establish sane policies that protect our citizens from these all too frequent deadly actions. The appetite for guns in this country is directly counter to the sanctity of life that God mandates."

"We are heartbroken at the senseless tragedy unfolding in Las Vegas. We mourn with the families and friends of those killed and pray for a speedy and complete recovery for the wounded. The American Jewish community unites in grief, healing, and comfort for the victims, the city of Las Vegas, and all those affected by these horrific events."

"Today is a day that will live long in American history as a day of tragedy, the largest mass shooting in America, ever. It is also a day where there are no Democrats or Republicans, there are no conservatives or liberals — we are all united as Americans. Together we cry out to God in their time of need. This is a time of great national need, and I call on pastors and religious leaders in every corner of the nation to call together their communities in prayer and compassion."

"We offer prayers for the victims of this horrific attack and sincere condolences to the loved ones of those killed or injured. American Muslims, along with their fellow Americans of all faiths and backgrounds, should immediately donate blood in Nevada and nationwide to assist the wounded. That the terror group ISIS would — without evidence — claim ‘credit’ for this heinous crime is an example of evil exploiting evil and is further evidence of that group's depravity."

Rabbi Yechiel Eckstein, founder and president of the International Fellowship of Christians and Jews

"As Israelis, we understand the pain of terror. Whether it’s the responsibility of a radical Islamist or a domestic terrorist, whether it’s done in the name of religion or not, all terrorism inflicts the same pain, suffering and unspeakable heartbreak. Today, the International Fellowship of Christians and Jews grieves with our beloved friends in the United States. We pray for those most closely impacted by the horrific attack in Las Vegas, and we ask God to speak words of comfort and resolve in the mind of every child so that instead of fearing the world, they will be inspired to bring peace to the world. "

"It is a tragedy that we have awakened this morning to the news of the largest mass shooting in American history. In moments like this America prays, and America comes together to help. It’s the responsibility of our churches and pastors to lead those efforts until every single person finds the help they need in their time of need. May God bless our nation, and may He protect us from ourselves."

"Unfortunately, all too many times we have witnessed the tragic dangers guns in the hands of determined killers or domestic extremists present. Across the country in schools, businesses and houses of worship, individuals have used guns to terrorize communities and local institutions. We remember Orlando, Charleston and Newtown and other mass shootings. Just last week, a gunman opened fire at individuals attending church in Tennessee. We firmly believe that one way to limit the power of extremists and reduce violence in our communities is to enact tough, effective gun violence prevention measures."

"I offer my deepest condolences and support to everyone affected by this devastating tragedy. Our community mourns with you and stands ready to support you as you begin the process of recovery from this senseless act. To community leaders and organizers, I urge you to ensure that all members of the community are included in the grieving and the response to Sunday’s events. When organizing remembrances, vigils, and memorials, please remember that the atheists and other non-believers in your community are mourning too. While some find comfort in words about ‘God’s plan’ or that victims are ‘with God,’ for others, these words will — at best — ring hollow and — at worst — deepen their grief."

"It is well past time for meaningful, bipartisan gun violence legislation in this country. In 2013, B’nai B’rith International leaders adopted a formal resolution that called for a ban on assault weapons, as well as a limit on ammunition magazine capacity. Though information about the shooter and his arsenal is still being uncovered, we have long held there is no acceptable, reasonable need for civilians to have access to large rounds of ammunition."

"Our prayers go out to the families and friends of the victims and those recovering as they go through this difficult time. We remain committed to our work alongside our interfaith and community partners, towards common sense gun control laws that keep the public and our law enforcement, safer. It is times like these that warrant a more unified front in the face of terrorism, hate, and all acts of violence to further ensure safety in our country and communities."

"My heart goes out to all those impacted by this senseless act of violence. When tragedies like the Las Vegas massacre occur, the political and religious barriers that too often divide us break down and we come together to mourn as Americans. This moment presents all of us with the opportunity to be there for one another as we try to come to terms with what happened yesterday. As our nation mourns, I hope we continue in the spirit of inclusion, as we are all impacted by this terrible tragedy."