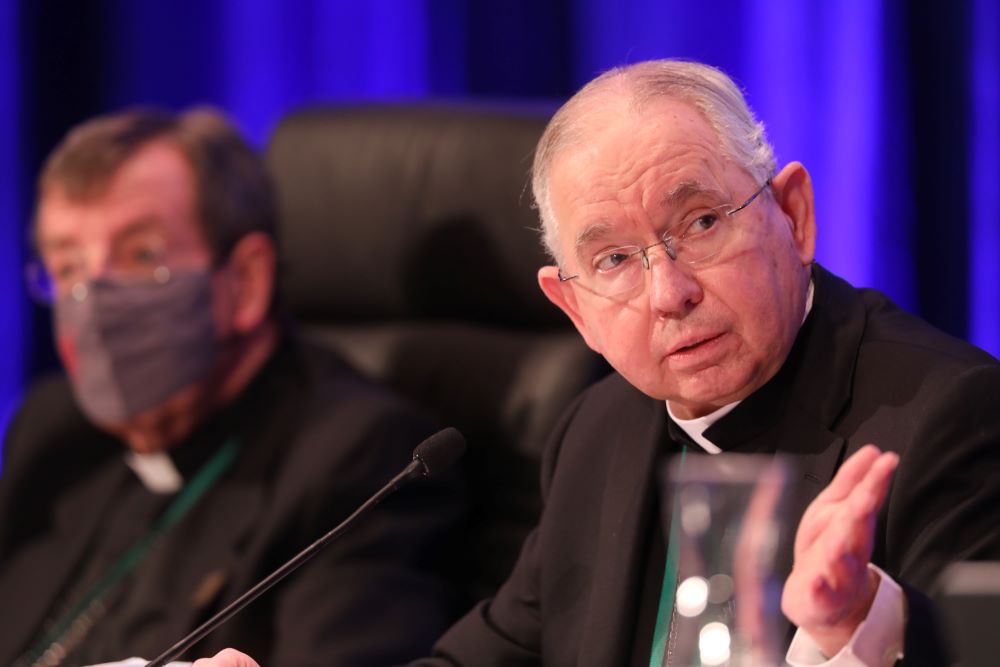 The U.S. Catholic bishops will gather for a retreatlike special assembly this summer in San Diego to focus on episcopal unity after a tense year and a half in which deep divisions surfaced among prelates over the issue of denying Communion to pro-choice Catholic politicians — including President Joe Biden.

There will be no public session for the June 2022 meeting of the U.S. Conference of Catholic Bishops because the normal assembly business of committee reports and presentations are being set aside for prayer, reflection and episcopal fraternity, a spokeswoman for the conference told NCR.

Instead, the June 13-17 special assembly will feature spiritual talks given by Archbishop Anthony Fisher of Sydney, Australia, with time for private and communal prayer, Mass, social outings and "fraternal dialogue," according to a memo sent to the bishops.

"As I mentioned to Archbishop Fisher, although this is not a formal retreat, it is a time [for] us to grow as bishops intellectually, pastorally, and spiritually," Bishop David Talley of Memphis, Tennessee, wrote in the March 7 memo, obtained by NCR. 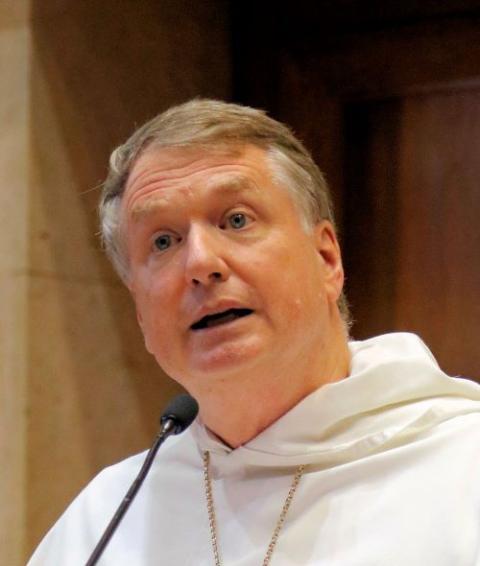 Archbishop Anthony Fisher of Sydney, Australia, shown in a 2019 file photo, will deliver spiritual talks to the U.S. Conference of Catholic Bishops in June. The assembly in San Diego will include no public sessions. (CNS photo/Simon Caldwell)

Talley, the chairman of the bishops' Committee on Ecumenical and Interreligious Affairs, wrote that the conference's working group organizing the gathering asked Fisher to delve into themes related to unity and mutual support among bishops; polarization in the country and divisions in the church; unity with the pope; and stressors related to the COVID-19 pandemic, among other points.

"They're very much focused on the internal life within the church," said Jesuit Fr. Thomas Reese, a journalist who has covered bishops' meetings for decades. Reese told NCR that the bishops, for a few decades, have met every few years or so for retreatlike gatherings where they focus on spiritual matters instead of the practical business of passing resolutions and voting on documents.

"I think it's a great idea that they do this," Reese said. "The bishops need something like this. Bishops don't really have anybody to talk to. Priests talk to each other. Pastors can get together and talk about their experiences. But bishops, who can they talk to, especially the ones in rural areas who are a long way from any other bishop?"

Bishop Daniel Flores of Brownsville, Texas — a member of the working group of bishops organizing the special assembly — told NCR he is looking forward to the gathering's informal format where he said bishops can benefit from guided meditations and conversations with one another.

"It's a more relaxed, conversational building up of understanding of how things are going," said Flores, who chairs the conference's Committee on Doctrine. He said the special assembly offers "a big picture moment" for bishops to reflect on themselves and the church.

"This year, particularly because the synod is something that's kind of on our minds, would be a good moment for us ourselves to live something of what the Holy Father is talking about, which is communion, mission and participation," said Flores, referring to the 2021-2023 Synod on Synodality. 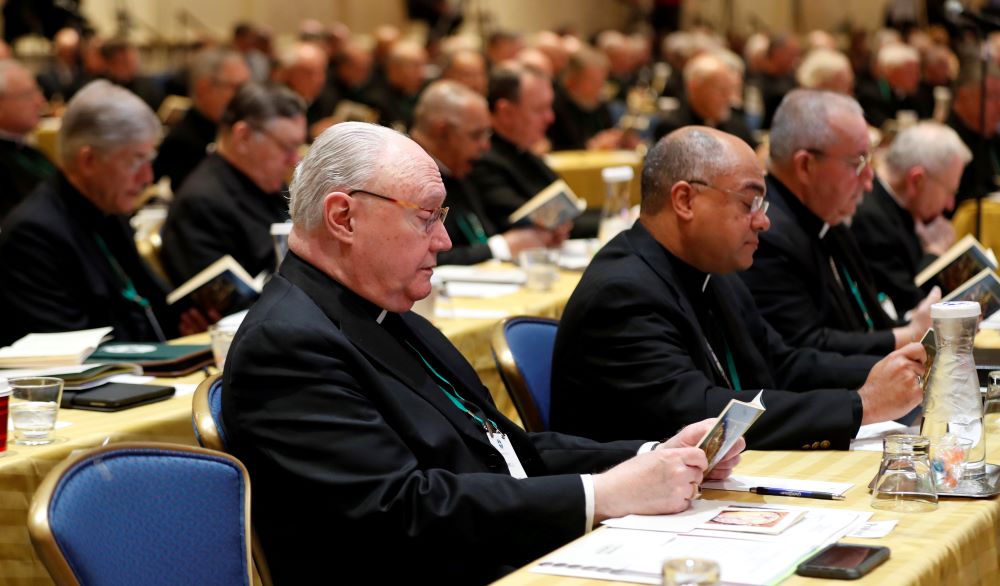 The bishops' spiritually-oriented, in-person gathering this summer comes one year after a tense virtual meeting in June 2021 that featured hours of sometimes contentious public debate over a document on "Eucharistic consistency" that some conservative prelates wanted to address denying Communion to Catholic politicians who support abortion rights.

The idea for the document grew out of a special working group that Archbishop José H. Gomez of Los Angeles, president of the bishops' conference, formed to consider the implications of Biden, a pro-choice Catholic, elected president in November 2020.

During last summer's debate, a few bishops called out Biden and House Speaker Nancy Pelosi, both Democrats, by name. Other bishops expressed concerns about the divisive nature of the debate.

At their fall 2021 general assembly in Baltimore, the bishops discussed the text in several closed-door executive sessions before overwhelmingly approving a milquetoast document that reiterated Catholic doctrine on the Eucharist without directly addressing the issue of pro-choice politicians.

The retreat in San Diego has the potential to help the bishops improve communication with one another and foster conversations outside the partisan divisions of American and ecclesial politics, Reese said.

"Sometimes if all you know about a bishop is what he stands up and says at a bishops meeting in November, then you don't know much about him," Reese said. "These are opportunities to form friendships, drink beer together, talk into the night and get to know one another."

In addition to prayer, the USCCB memo mentions possible social outings for the bishops, including a visit to the San Diego Zoo, a self-guided tour of the decommissioned naval aircraft carrier USS Midway and a round of golf at Torrey Pines Golf Course.

Also to help the American bishops bridge the ideological divide and heal any festering grievances will be Fisher, 62, who was ordained a Dominican priest in 1991 and was appointed by Pope Francis in November 2014 to serve as the ninth archbishop of Sydney.

"He is certainly not someone who's going to lead [the bishops] into schism," Reese said.

However, during a World Youth Day press conference in 2008, Fisher angered clergy sex abuse survivors when he appeared to refer to survivors "dwelling crankily on 'old wounds.' " Fisher, who at the time was an auxiliary bishop in Sydney and an organizer for World Youth Day, later said his remarks were taken out of context, claiming he was speaking about reporters.

Fisher has defended traditional church teachings on life and sexuality in public affairs. He spoke out against euthanasia in a 2015 debate with ethicist Peter Singer. Fisher opposed the legalization of same-sex marriage in Australia and said he was "deeply disappointed" when a slight majority of Australians voted in favor of legalizing same-sex marriage in a non-binding referendum in December 2017.

In his March 7 memo, Talley said the American bishops asked Fisher to reflect on the assembly's theme of "Episcopal Fraternity and Communio," with the centering Scripture verse being Matthew 18:20, where Jesus said that "where two or three are gathered in my name, there I am in the midst of them."

"The image is that of the Lord Jesus Christ calling the apostles and forming them into a community around Himself. This communion with Himself suggests for us bishops unity in Christ as His apostles," Talley wrote.

Fisher is scheduled to deliver seven talks and celebrate the closing Mass on June 17. The list of themes Fisher was asked to speak on includes "how to do fraternal correction with love," the isolation and loneliness that bishops struggle with, suffering and healing, the centrality of the cross, and society's growing secularization.

Reese said the fact that the bishops asked Fisher to speak on secularization touches on internal ecclesial debates over who or what to blame for the decline in Mass attendance, alienation from the church and the hierarchy, and the decline in the bishops' moral authority.

Said Reese, "Is it secularism? Consumerism? Is it sin and human weakness? Is it all those things? Or is it [the bishops] covering up the abuse crisis?"