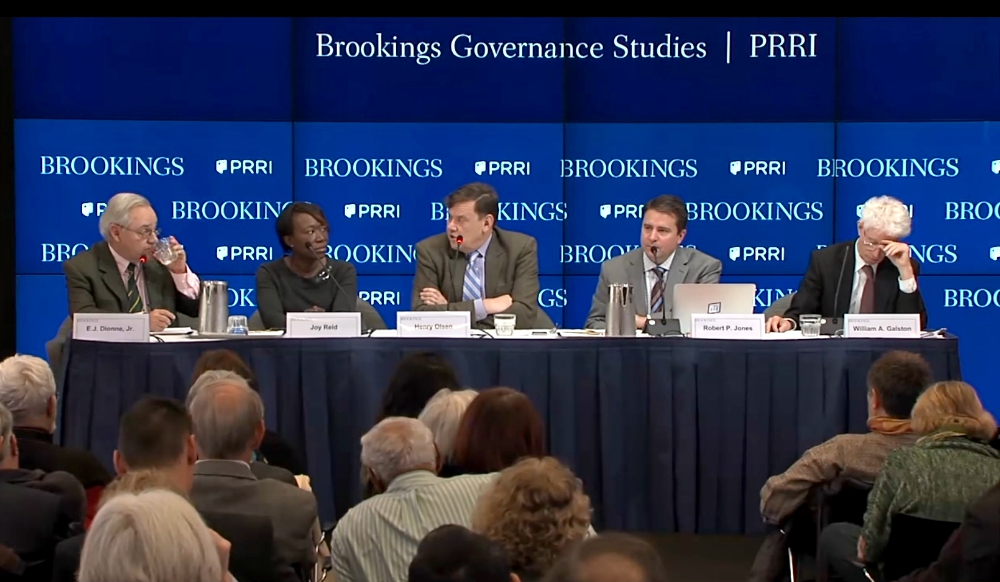 An annual survey conducted by the Public Religion Research Institute revealed fissures among American voters — and sometimes among Republican voters, specifically — on almost everything, encompassing such issues as building a wall on the Mexican border, whether football players should stand during the national anthem, and just how much of a threat the other political side's policies present to the country.

Little wonder that the survey report, presented Dec. 5 at the Brookings Institution in Washington, D.C., is called "One Nation, Divided, Under Trump." The American Values Survey found few areas of agreement among respondents.

"The story here is less about who loves their own party and more about who hates the other party," Robert Jones, CEO of PRRI and one of the report's authors, said as he reviewed the findings for a capacity crowd. "That's typically how it runs."

Highlights (or lowlights, depending on your perspective) included:

The numbers, Jones said, give a sense of "just how dug in those opinions are." 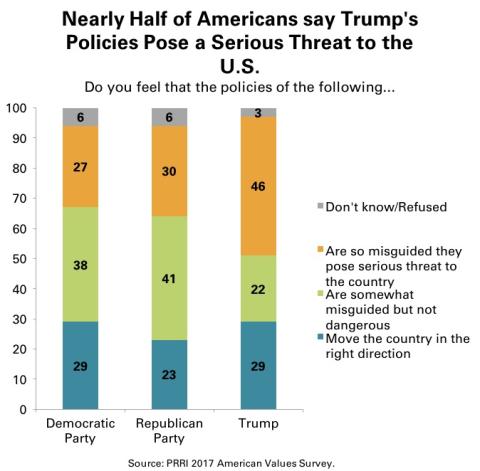 Interestingly, one of the few areas of general agreement, across gender and party line, was sexual harassment, which 78 percent of women and 63 percent of men said was part of a broader pattern and not just isolated incidents. Broken down by political affiliation, 77 percent of Democrats and 59 percent of Republicans said the same.

Henry Olsen, senior fellow at the Ethics & Public Policy Center and a conservative commentator, mused on the event's theme of "What does it mean to be Republican under Trump?"

"I think what it means to be a Republican under Trump is to be scared," said Olsen, citing fear of uncontrolled immigration, of the eroding of social and cultural norms that no longer prevail, of the loss of a dominant religious identity.

For evangelical Christians, especially, he said, the belief that the progressive left wants to "stamp them out" is neatly encapsulated by the case before the Supreme Court this week to determine whether a Christian baker can refuse, on religious and free-speech grounds, to make a cake for a gay wedding.

"If they won't let him do that [refuse service]," Olsen said of the evangelical line of reasoning, "what won't they let us do next?"

The thrice-married Trump, who was pro-choice before he was pro-life and routinely disparages his opponents (and anyone who crosses him) in often vulgar terms, seems an odd choice for religious conservatives to rally around, but seen through another lens, it makes perfect sense, said Olsen and another panelist, Joy Reid.

"Trump may be heretical," said Reid, national correspondent for MSNBC, but he is installing federal judges who will protect and promote Christianity, his tax policies favor home-schooling over public schools, and he wants to ban Muslim immigration.

"Among Republicans, it is mostly down to culture, and it's a lot down to race, to a country that is changing ethnically," said Reid. "In their view, it's washing a wave of 'not real Americans' over the country's cultural life and putting them in the margins. And they don't want to be in the margins."

For those voters, she said, "this is a fight. This is a war."

Jones agreed that fear is a primary motivator among Trump supporters but distinguished between voter feelings about actual policies, on which he said there is often more agreement than not, and the symbols that Trump uses to define the issues. Immigration and the wall are a prime example, he said.

"What's interesting is the symbolic issues that are animating more than actual policy issues," he said. "When you're at war, symbols begin to matter in ways they didn't before, and I think the wall is one of those things."

"But if you ask about policies — DACA [Deferred Action for Childhood Arrivals], a path to citizenship — you get half of Republicans supporting those policies. When you turn from symbols to policy, there's less polarization. The symbols and the fear of it have overrun the policies," Jones said. "If you get people out of that mindset, Americans are kind of pragmatic when you ask, 'What should we do about 11 million undocumented people here?' But if you ask about the wall, it's polarizing."

Even gratuitous tax cuts for the rich and tax hikes for the poor and middle class will probably not be enough to budge Trump's supporters, the data suggest. The axiom of "It's the economy, stupid," does not at all seem to apply to his most hardcore supporters, because the issues aren't the point, Reid said. The man himself is, in much the same way that the fact of President Barack Obama — a charismatic African-American man who represented a new America — was the point for many voters in 2008 and 2016.

But for that reason, the panelists agreed, Republicans should be concerned about turnout in the midterm elections, when Trump is not on the ballot, but candidates who are not always perceived as supporting his policies are. Republican voters could stay home, or even vote for Democratic candidates as a rebuke to Sen. Mitch McConnell (R-Kentucky) and his kind.

"Nearly half of people polled agree that the tax policy won't help them at all. Republicans largely don't care about that," said Reid. "To say economics and economic want is a driving factor of Trumpism misses the point."

Trump will stand up for them by attacking the migrants who take their jobs and the liberals who want to impose secular policies on all public life, she said.

"For Democrats who are obsessed with converting Trump voters, I'm not sure that's possible," said Reid. "Trump is their Obama. You can't break that support."