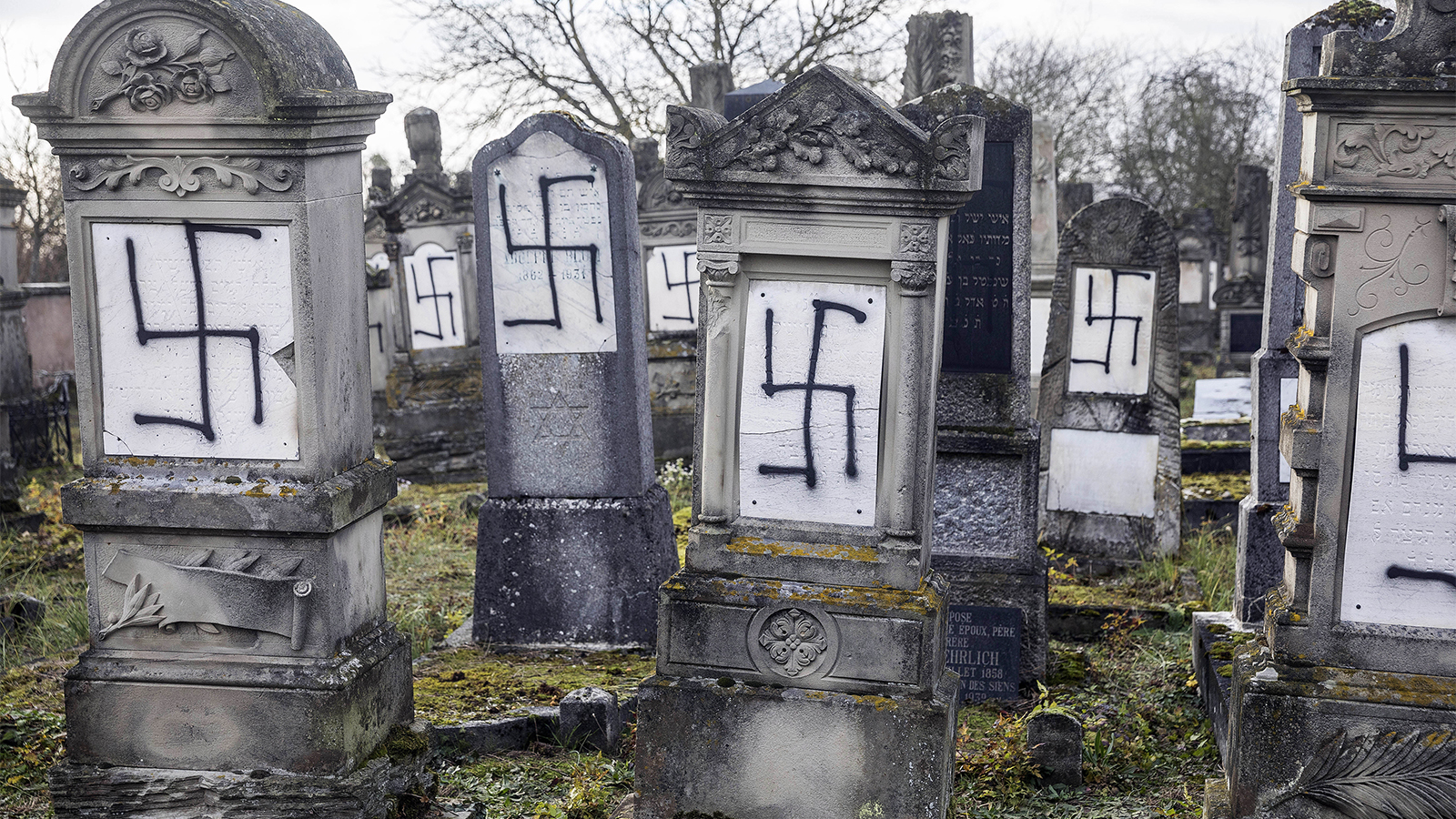 Jewish tombstones are seen desecrated with swastikas in the Herrlisheim Jewish cemetery, north of Strasbourg, in eastern France, on Dec. 13, 2018. Dozens of tombs were defaced. (AP/Jean-Francois Badias)

These acts included an attack on an 8-year-old schoolboy wearing a kippah and the murder of Holocaust survivor Mireille Knoll, who was stabbed and burned in her apartment.

Her killing prompted demonstrations against anti-Semitism throughout the country.

The hike in anti-Semitic activities came after two years of lower numbers of incidents.

The frequency in anti-Semitic incidents in France seems to be increasing again in 2019.

In the past two months, swastikas have been scrawled on posters of Holocaust survivor and French national hero Simone Veil, who is interred in the Pantheon. A grove of trees planted to honor the memory of Ilan Halimi, a 23-year-old French Jew who was kidnapped, tortured and killed, was vandalized. Yellow-vest protesters verbally abused French Jewish intellectual Alain Finkielkraut on a Paris street, while more and more anti-Semitic graffiti has been appearing on the walls of Paris and elsewhere.

In late February, vandals desecrated a Jewish cemetery near Strasbourg, spray-painting an estimated 100 gravestones with swastikas.

Francis Kalifat, president of the Representative Council of Jewish Institutions in France (CRIF), said the newest wave of anti-Semitism was a "signal of the democratic weakening" of France and called on the French population to "break up the wall of indifference that surrounds anti-Semitism," according to the organization.

Sacha Ghozlan, president of the Union of French Jewish Students, said the rise of anti-Semitism started online and now has moved "to the streets."

"I think that the fact for many years we got used to hate speech on social media, we did not ban this speech," Ghozlan said. "It has a direct kind of consequence."

Ghozlan said more training is needed on how to prevent anti-Semitism.

"Of course, we can do better on training for the students and for the teachers, for the judges and policemen, to make it more clear what anti-Semitism is, to train them," Ghozlan said.

The older, more embedded form of French anti-Semitism lives on the far right, where people harbor the idea that "the Jew is alien to the nation" and does not feel loyalty to France, he said. The newer type of anti-Semitism hails from the far left, with its disdain for capitalism and Zionism.

"All the murders that were committed (in France) in the name of anti-Semitism made reference to Islamist ideology," he said.

Both professors agree that there appears to be growing toleration of anti-Semitic views.

"There is a sort of kind of public tolerance nowadays for anti-Semitic tropes and claims," Marlière said.

Jikeli said that there's a "self-feeding dynamic" that allows anti-Semitic actions and speech to perpetuate like never before.

"People feel more emboldened to act out on their sentiments," said Jikeli, adding that anti-Semitic incidents have been on the rise since the early 2000s.

The academics would take different approaches to deal with anti-Semitic attacks. 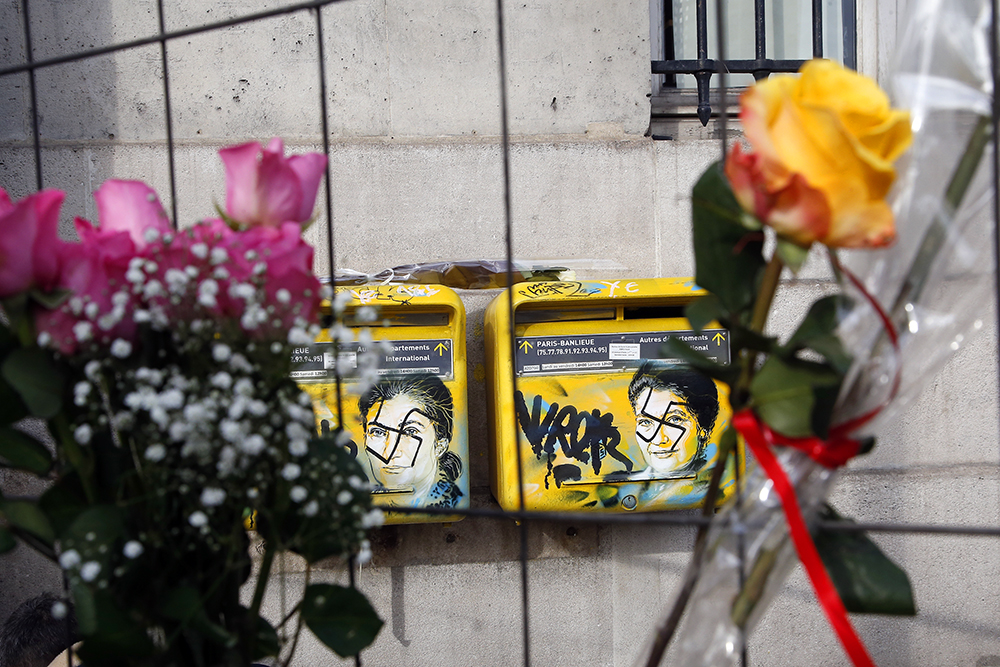 Roses are placed next to vandalized mailboxes with swastikas covering the face of the late Holocaust survivor and renowned French politician Simone Veil, before the vandalism was removed in Paris, on Feb. 12, 2019. (AP/Michel Euler)

For Marlière, the problem is that the French are "illiterate" when it comes to religions, because the strict separation of church and state, dating from the French Revolution, means that religion and religious history are not taught in schools.

"Religion is something that you're constantly told to keep private, low-key, not something to openly talk about," he said. "What really strikes me is the ignorance of French authorities, media, politicians and public intellectuals about Judaism. There's more ignorance about Judaism than about Islam," because the French are more culturally acquainted to Islam in France.

More awareness of religion, coupled with more condemnation of any anti-Semitic and Islamophobic tropes, would help keep the number of hate crimes down, he said.

For Jikeli, the problem is one of enforcing the laws. French police must be better trained to recognize anti-Semitism.

"Police know what child pornography is. They know what homophobia is. They should know what anti-Semitism is," he said.

Efforts must also be made to help teachers provide assistance to Jewish students on the receiving end of anti-Semitic bullying. Teachers have very little support, and some headmasters of French schools have advised Jewish parents to take their children out of schools because the schools cannot protect them.

France has taken several measures to decrease the number of anti-Semitic incidents.

In November 2018, Prime Minister Edouard Philippe announced the government would create a special network of investigators to probe complaints of anti-Semitic activities, while also implementing a national team to intervene in schools.

In a speech delivered at the CRIF annual dinner in late February, President Emmanuel Macron said three far-right, anti-Semitic organizations would be dissolved.

"Anti-Semitism kills in France," Macron said. "The faces populating our consciences tonight are not only those of the heroes I have just mentioned but also those of the martyrs recently murdered because they were Jews."