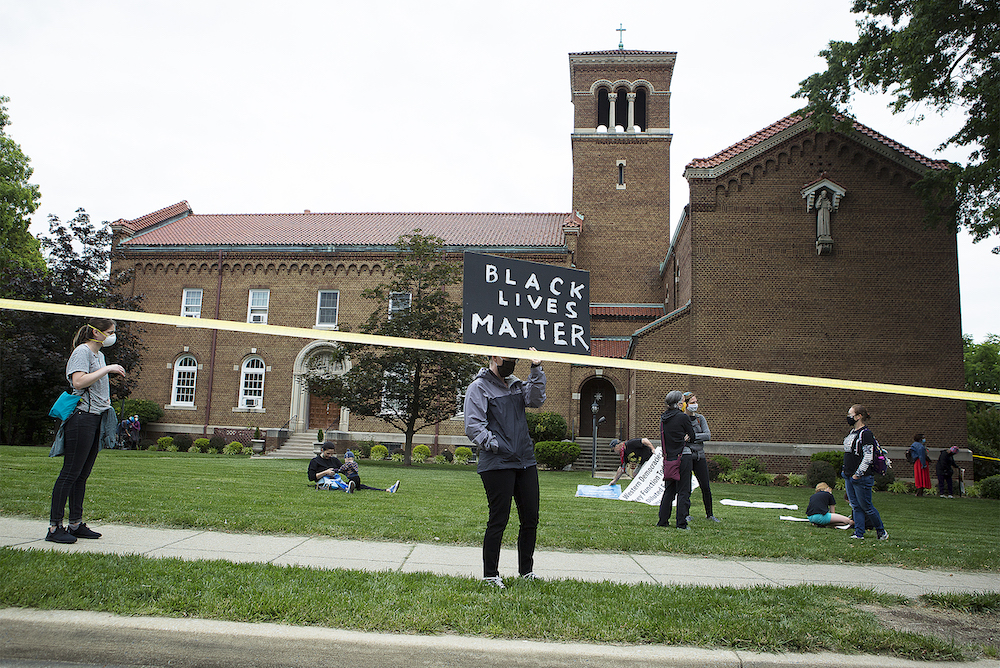 The video of George Floyd's murder took Archbishop Wilton Gregory of Washington, D.C., back to his childhood, when he attended the Chicago funeral viewing of Emmett Till, the 14-year-old lynched in Mississippi in 1955. It reminded him of all the other black people who were "assassinated for no other reason than the color of their skin."

Gregory spoke at an online public dialogue hosted by Georgetown University, titled "Racism in our Streets and Structures: A Test of Faith, A Crisis for our Nation." The event featured black Catholic leaders and advocates. It is recorded here.

Comparing the ongoing coronavirus pandemic to racism, Gregory said COVID-19 is a "good image" to remind us that there are things that impact lives that come in silence. He said the questions on the virus are the same we need to ask about racism.

"How is this silent but deadly virus passed on to other people? Is it learned at home? Is it transmitted through our structures? How can we render it ineffective?" said Gregory.

Joining Gregory in dialogue were Marcia Chatelain, professor of history and African-American studies at Georgetown University; Ralph McCloud, director of the Catholic Campaign for Human Development, and Gloria Purvis, host of the EWTN radio show "Morning Glory." The conversation was moderated by John Carr, director of the university's Initiative on Catholic Social Thought and Public Life.

Responding to accusations of partisanship for denouncing President Donald Trump's visit to the St. John Paul II National Shrine on June 2 , Gregory said the criticism reminded him of the civil rights movement, when people denounced priests and nuns for marching with civil rights leaders.

"The church lives in society. The church does not live behind the four [walls] of the structures where we worship," he said. "I think that's a that's a key sign and challenge of Pope Francis: Get out of the four walls and get into the world and make a difference proclaiming the Gospel — as Gloria said so, so effectively — beyond the four walls.

On June 2, Gregory released a strong statement criticizing Trump's visit to the shrine. "I find it baffling and reprehensible that any Catholic facility would allow itself to be so egregiously misused and manipulated in a fashion that violates our religious principles, which call us to defend the rights of all people even those with whom we might disagree," Gregory said.

The archbishop said "hundreds of people" have written and thanked him for his leadership. "This moment has brought us into a communication, that, I hope, will result in some personal change… but also some systemic change."

He said people were now talking about racism in spaces that were never vocal before — like the corporate world.

"If we don't work together, we will, I believe, miss perhaps the most significant moment for real national transition," he said.

Gregory said that currently no political party is completely aligned with the church's social justice teaching, and the church getting too close to any one party makes it lose the capacity to speak the Gospel truth to everyone.

"Too close an alignment with any one political party weakens our prophetic capacity," said the archbishop.

Also appearing at the online conference was Cardinal Peter Turkson, prefect of the Vatican Dicastery for Promoting Integral Human Development.

Turkson, who is from Ghana, said one of the biggest sins in the Bible is the killing of a brother, and the summit of Christ's salvation was to restore brotherhood among people. Turkson said racism was one of the biggest forms of rejections today.

Talking about the response to the current Black Lives Matter protest, Gregory said he was taking "hope" from it and looks at it as a "different transition moment."

"There are many more white faces involved in this response than I have ever saw before. And that gives me hope that somehow this is more than just a passing moment," he said.

Going forward, Gregory said that a group of priests in his diocese have come up with proposals to combat racism.

"They are energized. And I want to encourage them to continue the dialogue on how they can pastor more effectively the people they have been sent to serve," he said.

[Sarah Salvadore is an NCR Bertelsen editorial intern. Her email address is ssalvatore@ncronline.org.]