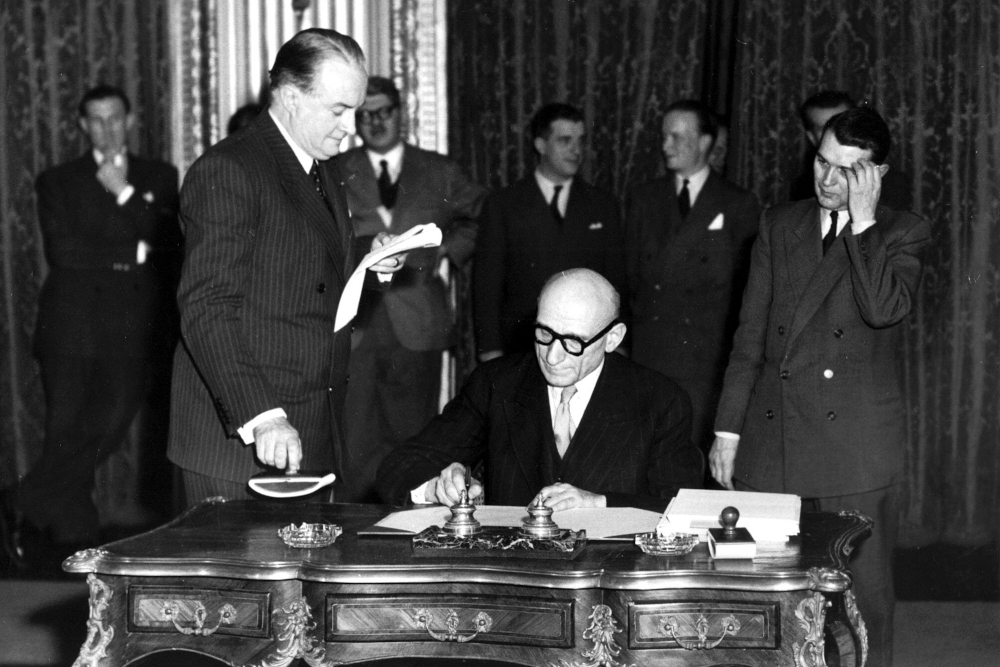 In this April 18, 1950 file photo, French foreign minister Robert Schuman signs a treaty. Schuman, a former French minister and Resistance fighter in World War II, died in 1963 and had been president of the European Parliament from 1958-1960. (AP/1950)

Robert Schuman, a French statesman who paved the way for the bloc that eventually evolved into European Union, has moved ahead on the Catholic Church's path toward possible sainthood.

The Vatican said Pope Francis on June 20 approved a decree declaring the "heroic virtues" of Schuman, a former prime minister, finance minister and foreign minister for France after World War II. In 1950, as foreign minister, he developed a plan to promote European economic unity in hopes of furthering peace.

Schuman died in 1963 after serving as the first president of the forerunner of the European Parliament.

The pope's decision means Schuman can be called "venerable" by the Catholic faithful. It is one of several steps in a usually long process that can result in sainthood.

The European Commission website describes Schuman as "one of the founding fathers of European unity,'' hailing him as "the architect of the project of European integration."

The Vatican described Schuman as a man of Catholic faith.

"Behind the action of the public man, there was the interiority of the man who lived the sacraments, who, when he could, would take to an abbey, who would reflect on the sacred Word before finding the shape of his political words," it said.

Born in Luxembourg in 1886 to a Luxembourg mother and a French father in an area annexed by Germany, he was a German citizen at birth. After World War I, when the area was returned to France, Schuman became a French citizen.

A lawyer and a member of the French National Assembly, Schuman was arrested in 1940 by the German Gestapo after the German occupation of France, but escaped in 1942. The European Commission biography of him notes his activity in the French Resistance.

On May 9, 1950, Schuman gave a speech pitching cooperation between European nations to help converge their economic interests. Such cooperation, especially involving France and Germany, he argued, would make another war on the continent both unthinkable and impossible.

His plan helped see the realization of the 1952 European Coal and Steel Community, a forerunner of the Common Market formed in 1958.

Last year, noting the 70th anniversary of his speech, which became known as the Schuman Declaration, Francis praised the statesman's legacy. Francis said from that point on there came "a long period of stability and peace which we benefit from today."