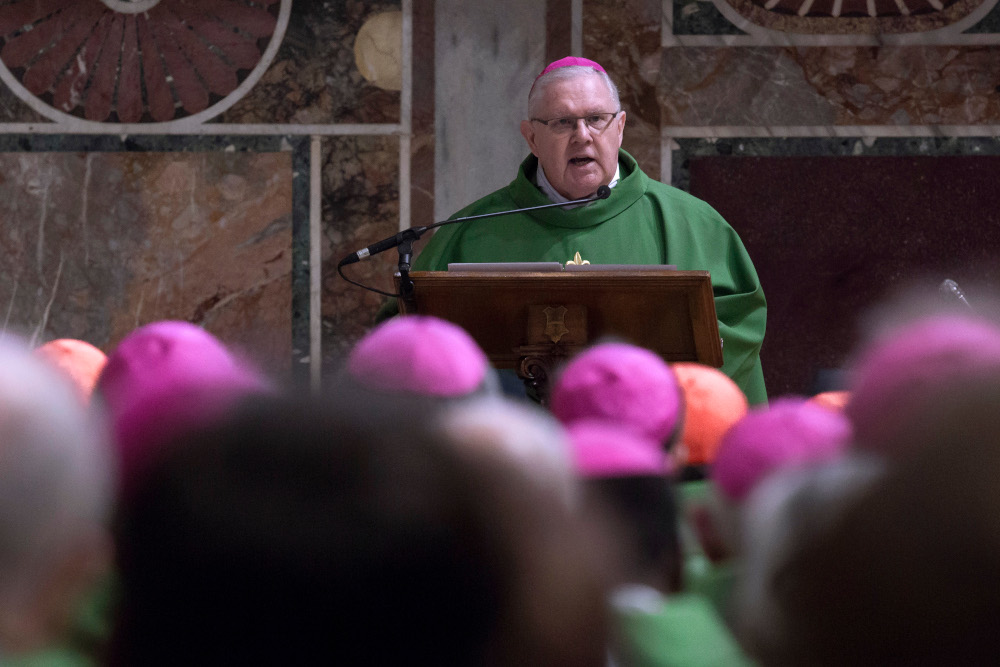 Archbishop Mark Coleridge of Brisbane, president of the Australian bishops' conference, gives the homily during Mass at a meeting on the protection of minors in the church at the Vatican Feb. 24, 2019. A six-person committee charged with reviewing church governance and management is expected to present Australia's bishops with a plan to overhaul the management of the church in the country. (CNS/Maria Grazia Picciarella)

The president of the Australian Catholic Bishops' Conference is the latest of the country's senior clerics to push back against legislation to lift the seal of confession for child sexual abuse.

Archbishop Mark Coleridge of Brisbane made a submission to the Queensland state government opposing draft legislation that would see priests face up to three years in jail for failing to report confessions of child sexual abuse to the police; the penalty would be five years for "failure to protect."

In his submission, Coleridge said a confession is between the penitent and God, and the priest's task is to enable that dialogue.

"The proposed legislation would make the priest at this vital point less a servant of God than an agent of the state," said Coleridge. "The mechanism within this legislation which deals with the confessional seal quite simply will not make a difference to the safety of our young people."

Many priests have said they have never heard a confession from a child abuser, and some have noted that the psychopathy of many offenders is such that they do not believe they have done anything wrong.

In February 2019, Coleridge gave the homily at the closing Mass of the Vatican summit on child protection. He said the Catholic Church needs a true conversion that places survivors, and not the institution, as the focus of its concern as it enacts measures to combat the sexual abuse of minors and vulnerable people.

Still, the prelate's insistence that the confessional should trump the state's laws has drawn a storm of protest on social media by Catholics and other Australians, concerned that the church is still prioritizing traditions over child safety.

Others are concerned that the Catholic Church in Australia remains on probation after the damning finding of the Royal Commission Into Institutional Child Abuse and that the pushback from Coleridge and others will be seen as evidence that the church remains clericalist at heart and is not doing enough to change.

The Queensland government is the latest of Australia's six states and two territories to propose such legislation, which comes in direct response to the recommendations of the Royal Commission. From 2013 to 2017, the commission heard evidence that Catholic-run institutions were among the biggest offenders in scandals that reached back decades.

Last November, similar legislation was introduced in Victoria the state, home to the dioceses of Ballarat and Melbourne, which were at the epicenter of multiple child abuse scandals. Other states and territories have all signaled intentions to introduce legislation to remove the legal shield from the confessional for child sexual offenses.

The seal of confession has been an issue in other countries, too. For instance, in November, Cardinal Vincent Nichols of Westminster told the Independent Inquiry into Child Sex Abuse that Catholic priests would die rather than break the seal of confession to report child abusers to the police.

"The history of the Catholic Church has a number of people who've been put to death in defense of the seal of confession," he said. "It might come to that."