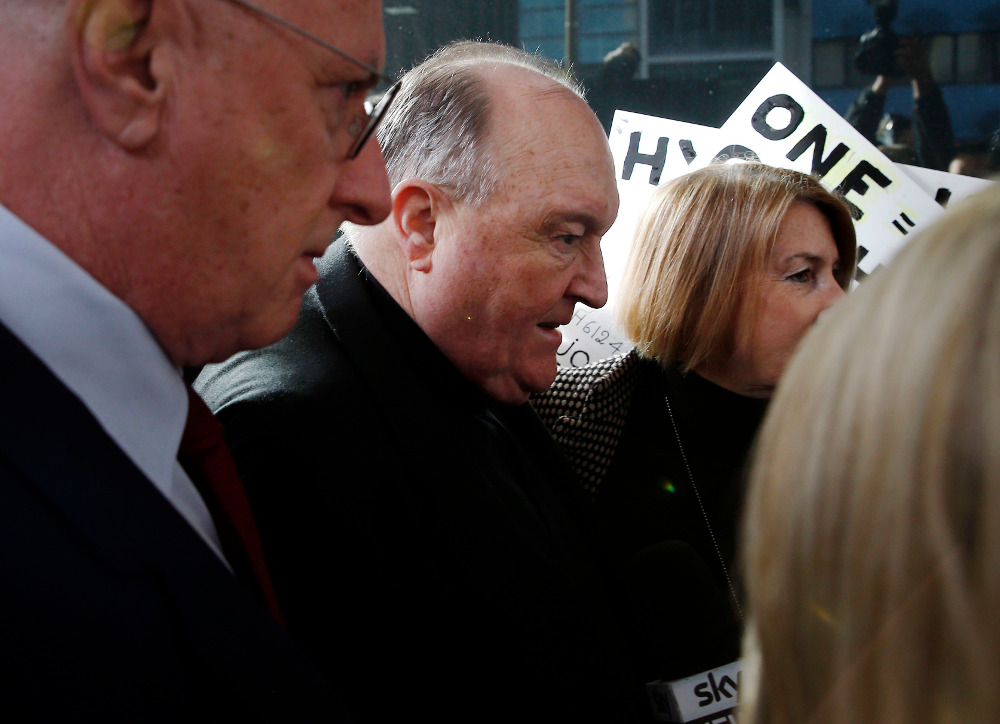 Editor's note: This story was updated at 11:15 a.m. Central time with a statement from Archbishop Philip Wilson and information on an upcoming meeting into the church's formal response to the Royal Commission into Institutional Responses to Child Sexual Abuse.

Pope Francis has accepted the resignation of the Archbishop Philip Wilson of Adelaide, Australia, who was found guilty of failing to report child abuse.

The announcement came July 30 in a press release from Archbishop Mark Coleridge, president of the Australian Catholic Bishops' Conference.

Wilson "has decided ... that his conviction means he can no longer continue as Archbishop because to do so would continue to cause pain and distress to many, especially to survivors, and also in the Archdiocese of Adelaide," Coleridge's statement said.

It is the second resignation of a high profile Catholic prelate in two days, following the July 28 resignation of U.S. Cardinal Theodore McCarrick from the College of Cardinals because of allegations against him of sexual abuse and harassment.

Since June, Francis has accepted the resignations of five Chilean Catholic bishops in the continuing fallout from that country's clergy sexual abuse crisis.

Wilson, 67, a former president of the bishops' conference, was found guilty in May of concealing the abuse of altar boys in the 1970s by pedophile priest James Fletcher. He was sentenced July 3 to six months home detention and six months parole, but has he said that he intends to appeal the ruling under the "due process of law." Another hearing has been set for Aug. 14 to assess the location of his home detention.

Read this next: Australian archbishop sentenced for failing to report abuse in 1970s

Wilson had stepped down May 25 from the pastoral care of the diocese but had resisted resigning, saying July 4 he would only do so if an appeal of his conviction had failed.

However, "there is just too much pain and distress being caused by my maintaining the office of archbishop of Adelaide, especially to the victims of Father (James) Fletcher," Archbishop Wilson said in a statement released July 30.  "I must end this and therefore have decided that my resignation is the only appropriate step to take in the circumstances," he said.

Wilson said the pope did not ask him to resign, but he submitted his request to the pope July 20 "because I have become increasingly worried at the growing level of hurt that my recent conviction has caused within the community."

The archbishop said he hoped and prayed his decision would be a "catalyst to heal pain and distress" and allow everyone in the archdiocese, including victims of Fletcher, to, according to the archdiocese's statement, "move beyond this very difficult time."

In his statement, Coleridge said, "While the judicial process will continue, Archbishop Wilson's resignation is the next chapter in a heartbreaking story of people who were sexually abused at the hands of Jim Fletcher and whose lives were forever changed."

"This decision may bring some comfort to them, despite the ongoing pain they bear," Coleridge said.

Coleridge also noted that Wilson "has been praised by many for his work to support victims and survivors of child sexual abuse as Bishop of Wollongong, Archbishop of Adelaide and president of the Bishops Conference."

Meanwhile, the Australian Catholic Bishops' Conference announced July 26 it would hold a special meeting Aug. 2-3 in Melbourne to expedite the Catholic Church's formal response to the Royal Commission into Institutional Responses to Child Sexual Abuse.

Coleridge said in a statement that they had received additional advice from the Truth, Justice and Healing Council, the Implementation Advisory Group, Catholic Professional Standards Limited, local safeguarding experts and canon lawyers that would better inform the bishops' response.

"We have also begun discussions with the Holy See about issues that concern the discipline and doctrine of the universal church," he wrote.

The archbishop said he hoped the bishops' formal response to the Royal Commission would be released as soon as possible after the early August meeting.

A version of this story appeared in the Aug 10-23, 2018 print issue under the headline: Australian bishop, convicted of failing to report child abuse, resigns.