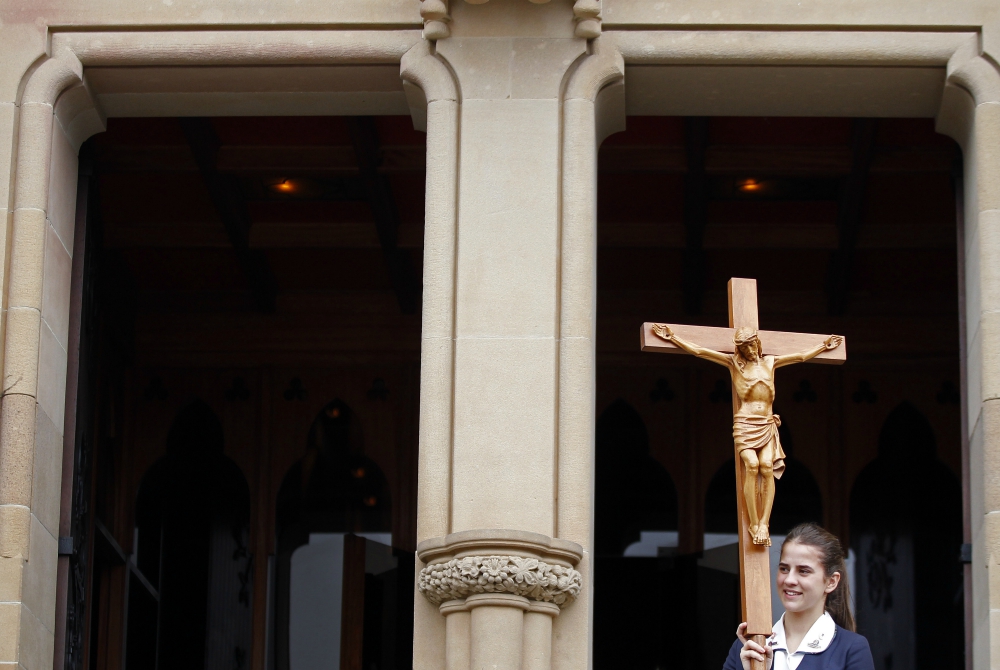 A young woman leaves St. Mary's Cathedral after a Mass in Sydney in 2013. (CNS/Reuters/Daniel Munoz)

A new report commissioned by Australia's bishops and religious orders recommends a series of radical changes to the way the Catholic Church operates across the country, tackling issues as far-ranging as women's inclusion in decision-making roles and the Vatican's opaque process for making episcopal appointments.

The overarching theme for the report — written as part of the local church's response to a five-year government inquiry into institutional child sexual abuse — is how governance in the church can be more "co-responsible," or better shared among bishops, clergy and laypeople.

Revelations of clergy abuse and cover-up, the authors state, showed "the widespread failure of the Church's authorities to respond with justice and compassion" and "give a particular focus to the need for reform in practices of governance within the Catholic Church."

The report, which encompasses seven chapters, four indices and a bibliography over its 208 pages, had originally been delivered to the Australian bishops in early May and kept confidential to allow the prelates time to digest its contents.

La Croix International published the full text overnight June 2. NCR subsequently verified the authenticity of the document with one of its authors, who were 14 eminent Australian and global lay Catholics and four clergy members.

The report, titled "The Light From the Southern Cross," makes 86 recommendations for change in the governance of the Australian Catholic Church. Among the major suggestions:

The report's language is laced with references to complex theological topics and specifics from the church's Code of Canon Law. But in places it is also direct and biting.

'The most visible indicator of the barriers to full participation is that the hierarchy of the Catholic Church in Australia, as in the Church across the world, remains exclusively male.'

—'The Light From the Southern Cross' report

On the all-male nature of the church's hierarchy, for example, the authors state that "many Catholic women and men experience pain at the failure of the Church to enable the fuller participation of women."

"The most visible indicator of the barriers to full participation is that the hierarchy of the Catholic Church in Australia, as in the Church across the world, remains exclusively male," they say.

"This robs the Church of the full benefits of the feminine in dialogue, in celebration, and in decision-making," they state. "The marginalisation of women in the Church discourages the participation of younger women and is an urgent issue that needs to be heard, understood, and redressed."

On the Vatican's process for the selection of new bishops, the report says that while canon law specifies that there be local consultation before the appointment of a new prelate, "it is not readily apparent how it occurs in practice."

"The absence of public consultation, together with the opaqueness of the selection process, leaves all but the select few consulted in the dark, and calls into question its efficacy," state the authors.

Current practice for the appointment of bishops in dioceses across the world involves the Vatican's ambassador in a country proposing a list of three possible candidates, known by the Latin term terna, to fill any vacancies.

The Australian report suggests that ambassadors more transparently consult with the presidents of the local bishops' conferences and laypeople in the diocese in question "to gather a better idea of the future needs of the diocese and create a required profile of the candidates to be appointed bishop."

On the wider issue of how bishops can share their responsibility for governance with laypeople, the report notes that laypeople already serve frequently as diocesan financial officers, chancellors and notaries.

"Canon law … is not an impediment to a true participative partnership between laity and clergy in the governance processes that are integral to the decision-making processes of the Church. Rather it actually enhances it," it says. "If best practice in governance, which includes transparency, accountability and the critical notion of stewardship, is to be utilised, there is room for the ultimate canonical responsibilities of a bishop to co-exist in harmony with the collaborative participation of the laity in a sense of partnership aimed at fulfilling the prophetic mission of the Church."

On the issue of pastoral councils, the report notes that canon law recommends that dioceses create them "to the extent pastoral circumstances allow." The report then says their use in Australia is "underdeveloped," and suggests the local church mandate that each diocese have one.

They envision a wider role for councils than currently practiced in many places of the world, suggesting they be consulted, for example, when a bishop wishes to erect or suppress a parish, to approve the diocesan budget, and whenever a church building is being sold.

The authors say that such councils "should be inclusive and representative of the diversity of the lay faithful within the diocese," and suggest that members could be drawn from local parish councils.

Massimo Faggioli, a theologian at Villanova University, was one of the 18 authors of the report. In a May 19 article for NCR, before the text was publicly available, Faggioli said their document "will be studied for many years to come by theologians, church historians, canon lawyers, and all those with an interest in connecting spiritual and institutional reform in the Catholic Church."

Other authors of the text included: Justice Neville Owen, a former senior judge of the Court of Appeal of the Supreme Court of the state of Western Australia; Pauline Connelly, chancellor of the Adelaide Archdiocese; Myriam Wijlens, a canon lawyer and theologian at the University of Erfurt in Germany; and Richard Lennan, a theologian at Boston College.

Owen and Wijlens are also members of the Pontifical Council for the Protection of Minors.

The Australian government's Royal Commission into the Institutional Responses to Child Sexual Abuse (2013-17) highlighted decades of major failures in Catholic leadership in protecting children from abuse.

As it concluded its work, the commission recommended that the country's bishops and religious conduct a thorough review of their governance structures.

It is unclear what the next steps for the possible implementation of the new report might be. In a May 18 statement acknowledging the bishops' receipt of the then-confidential document, Brisbane Archbishop Mark Coleridge, the head of the national conference, said the bishops would study it and then discuss it at their November plenary meeting.

Australia's Catholic community is also preparing for a once-in-a-generation assembly of the country's church — a plenary council that has been in planning for two years. The first of the council's two assemblies had been set to be held in October, but has been delayed due to the ongoing coronavirus pandemic.