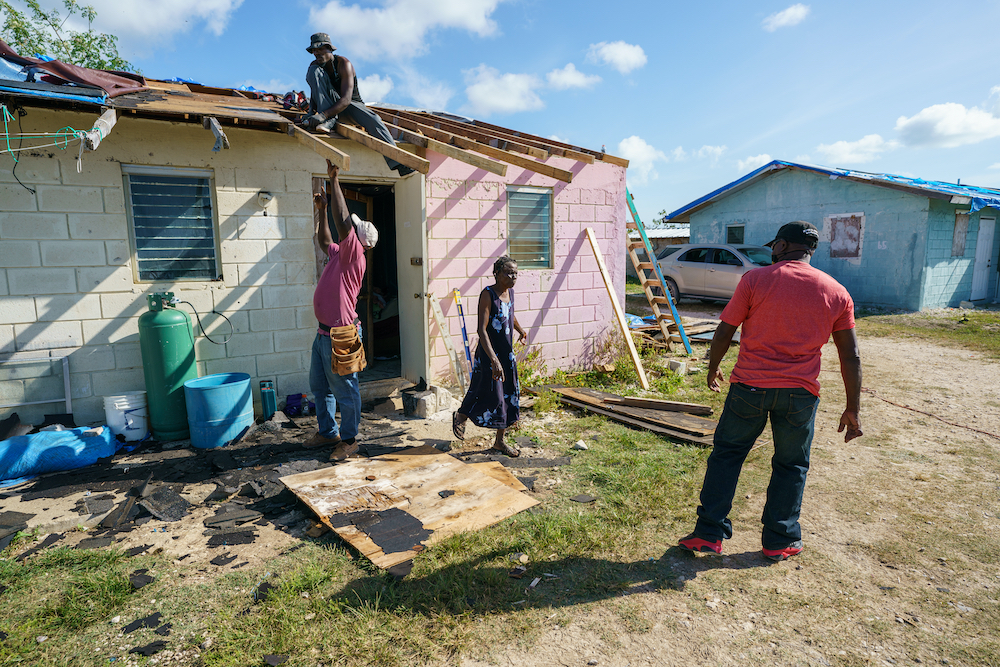 Anthony Jeremy, in a red shirt, right, talks with constructions workers and a home owner in The Farm, a Haitian migrant squatters settlement on Abaco Island in the Bahamas. Jeremy works with the health-related non-governmental organization Project Hope as a community liaison, logistics coordinator and driver. (Gregg Brekke)

Haitians in the Bahamas live in a tenuous status. Some, especially those born in the Bahamas, have residency cards. A very few have long-term visas. Others have work permits. But most are undocumented and thus unaccounted by the Bahamian government in any official population total, even in death.

For this reason, and although the official death toll of those lost to 2019's Hurricane Dorian across all the Bahamas is 84, with 245 still missing, the number of Haitians who died or are missing is likely much higher.

On Abaco Island alone, where up to 8,000 Haitians lived in shantytowns called the Mudd and Pigeon Peas, one government estimate of Haitians lost in the storm was 75 persons. But the Haitian community on the island believes the number of souls swept out to sea is at least 1,000.

When Dorian made landfall in the Bahamas as a Category 5 storm in late August 2019, few people comprehended the devastation that could come from the country's worst ever recorded storm. Not only did winds reach 185 mph as it struck Abaco Island on Sept. 1, also a record for the Bahamas, the storm stalled and unleashed its fury for over 24 hours, especially on the islands of Grand Bahama and Abaco.

Few structures were left undamaged by the sustained winds and storm surge that swept as much as 25 feet of water overland. As the surge rushed out to sea after Dorian dissipated, it took with it crops, livestock, homes and hundreds of inhabitants. 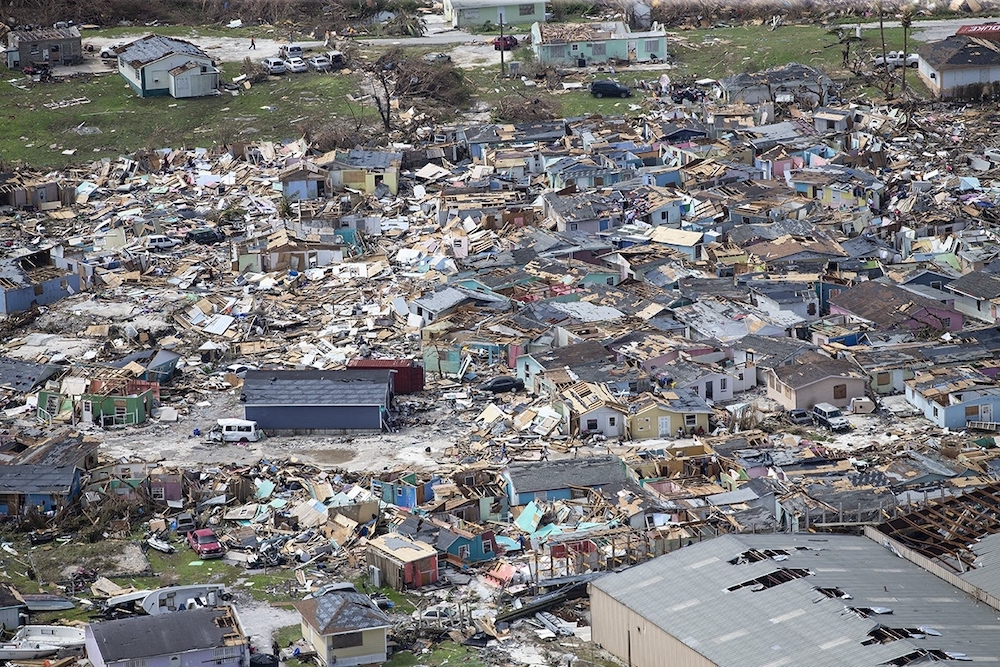 Anthony Jeremy was born in the Bahamas to Haitian parents. He works with the health-related non-governmental organization Project Hope as a community liaison, logistics coordinator and driver. Living in the Mudd when hurricane Doran made landfall, he said nobody expected the storm to be as vicious or devastating as forecasted. For Jeremy, the decision not to leave had dire consequences.

"My wife and I were in the water trying to swim to the land when a piece of two-by-six [lumber] hit her in the neck," he recalls. "When I scooped down to get her it was too late. I looked for 45 minutes trying to find her. The water was getting too high, and I couldn't stay in [the water] any longer to find her."

Not only did he lose his wife, but Jeremy said all signs of existence were wiped away in the Mudd where even today few reminders of habitation exist.

After Dorian, many of the displaced Haitians from Abaco were evacuated to the towns of Nassau and Freeport or the minor islands of Eleuthera and Exuma. Hundreds have been deported back to Haiti. Jeremy said few if any Haitians have arrived in the Bahamas following the hurricane.

The Haitian community on Abaco has now relocated to higher ground and is being joined by those returning from post-hurricane shelters on other islands. They are setting up residences, temporary and permanent, on a plot of abandoned land owned by foreign interests that raised citrus and sugar cane and attempted to cultivate tobacco.

It's known as The Farm, and Jeremy said nearly 1,000 homes have been constructed on the land since Dorian and estimates 3,000 people are now living there.

Remarried and expecting his first child at the age of 52, Jeremy began construction on a new home in The Farm last fall. He initially believed his property claim would be protected as a Bahamian-born Haitian. But an April 10 raid in which the government confiscated generators and refrigeration units disabused him of that notion and served as a precursor to the tenuous existence experienced by Haitians on Abaco. 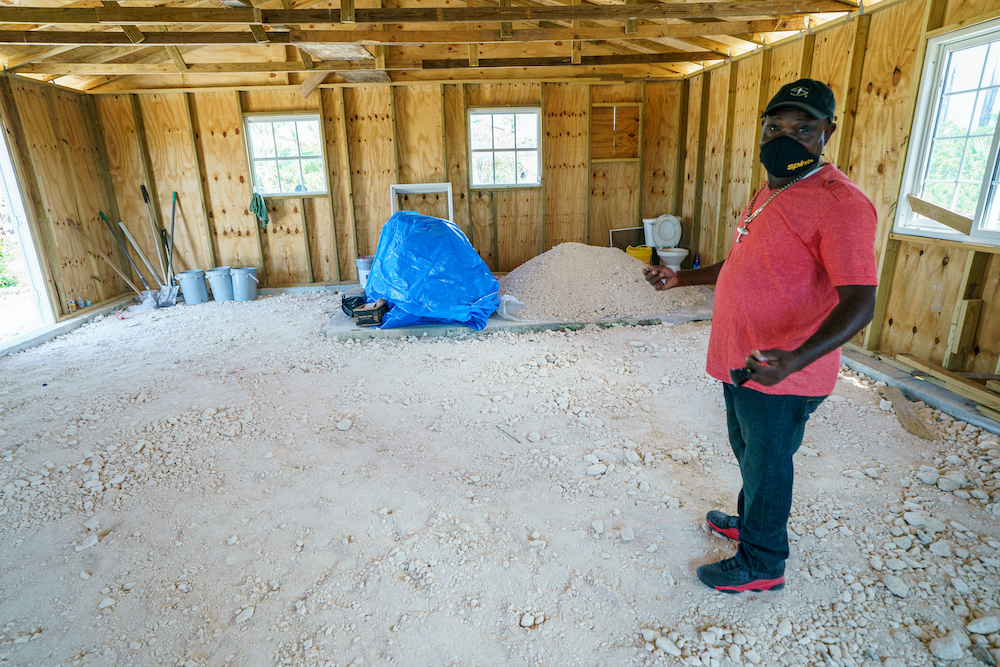 Anthony Jeremy stands in the shell of his newly constructed home at The Farm, a Haitian migrant squatters' settlement on Abaco Island in the Bahamas. A government order has been issued saying all homes in the settlement will be demolished on April 28. (Gregg Brekke)

Following the raid, residents of The Farm received notice the government will bring bulldozers into the community on April 28 to demolish structures — both permanent and temporary. Outcry from Bahamians and human rights groups has, as of yet, gone unnoticed by government officials.

While economic and infrastructure repair has been slow on Abaco, a flurry of activity in early 2021 initiated the repair and reconstruction of St. Francis de Sales and offers a hopeful sign to people on the island. Along with this rebuilding, the archdiocese distributed relief supplies from the church during an Easter 2021 outreach signaling a return to active ministry in the parish.

Despite signs of hope, those who serve the Haitian population say the devastation and loss experienced during Dorian and in its aftermath is only one example of the hardships endured by Haitians in the Bahamas.

"The main problem is immigration," said Fr. Yves Gattereau of the Haitian community he serves on the island of Grand Bahama.

He arrived in Freeport in late spring of 2020, just as COVID-19 restrictions took hold in the Bahamas. Due to limits on gatherings, he said it has been difficult getting to know his congregation via online worship and meetings, though more recently they have been able to reunite in smaller groups. 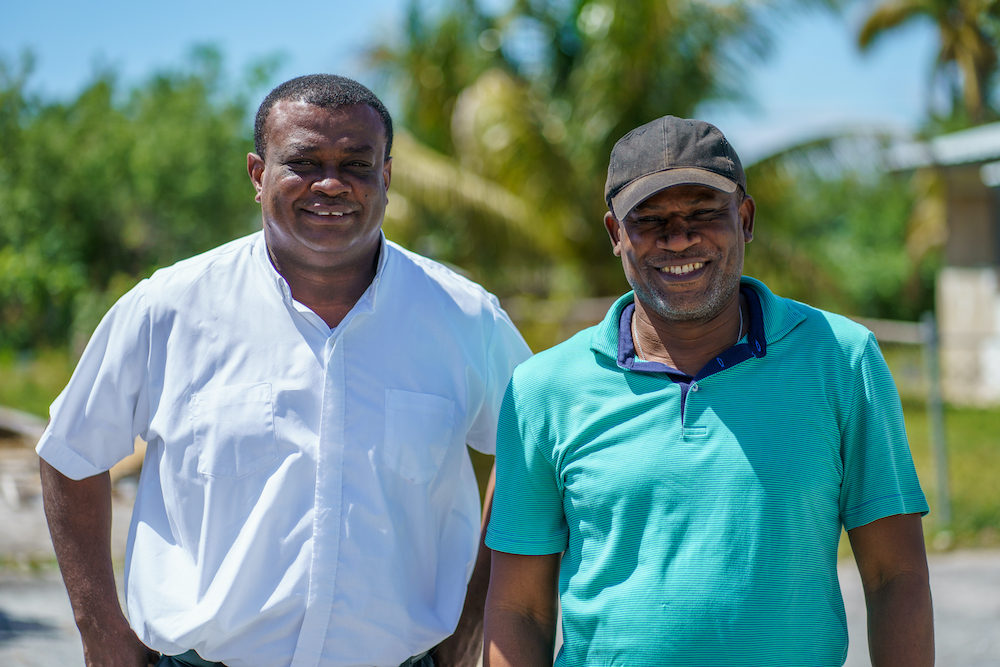 "My work has primarily been spiritual accompaniment in these first few months," said Gattereau. "I see people trying their best to live, but it is difficult. There are limits on the number of [Haitian] people allowed to stay, allowed to work in the Bahamas. Some will get paid under the table, but if they are caught it will mean jail or deportation."

As a result, he said, "People are afraid to come to church."

Haitians face several barriers to obtaining regular legal status in the Bahamas. The cost of a work permit, currently priced at $2,000 per year, is coupled with a lengthy and expensive process of applying for residency. Additionally, many Haitians in the Bahamas face anti-immigration sentiment perpetuated by Prime Minister Hubert Minnis and his nationalist "Bahamas First" rhetoric. The constant threat of deportation looms heavy for those without proper documentation.

The Nassau Archdiocese has ministered to the Haitian community in the Bahamas for nearly seven decades. In the 1950s, in response to the growing number of Haitian migrants in the Bahamas, clerics from the archdiocese visited Haiti to better understand why people were fleeing, learn the Haitian Creole language, and see how they might better serve the population spiritually and materially as they migrated into the Bahamas. 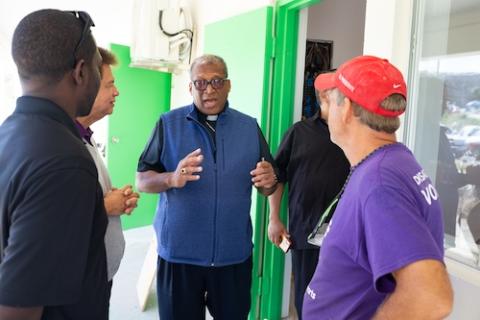 A Haitian apostolate was established in response to these inquiries and has served the community in the Bahamas ever since. And the need continues to grow. As of 2019, Haitians accounted for up to one-fifth of the total population in the Bahamas.

"For decades we've sought to offer a welcome to the Haitian people here," Nassau Archbishop Patrick Christopher Pinder told NCR. "As children of God we are obliged to respect their dignity and right to exist."

While Gattereau and other priests of the archdiocese who serve the Haitian population work to provide spiritual nurture and community cohesion for the people in their care, Haitians nonetheless face discrimination and political obstruction that make it difficult for them to forge a satisfactory life in the Bahamas.

Pinder, the archbishop, said the Haitian population is important because "people are hardworking, not political in any way," and many are hoping to make a better life for themselves and their families. This often means working unskilled or semi-skilled jobs in construction and landscaping that are open to migrant labor.

"Go to any job site and you'll find Haitians," he said. "It doesn't take long to see and understand the Bahamian economy really needs the labor of the Haitian people and their presence in our communities. Still, it's very difficult for them to receive the proper documentation for work visas and residency."

To that end, the archdiocese offers help to Haitians during their legal processes when possible, by providing official records linked to the sacraments of the church, most importantly baptism and marriage. Education efforts and English as a second language courses are also offered as Haitians seek to integrate into society.

The archbishop acknowledges the Bahamas is merely a "stopover" for some in the Haitian community as they attempt to save enough money to make the short 60-mile trip to the United States. Yet for Pinder, the humanity of those in the Haitian community is most important — whether they seek to stay in the Bahamas or migrate elsewhere, their worth goes beyond nationality or legal status. Empathy and compassion, he said, are at the root of the church's care for those fleeing instability in Haiti.

"We have and will continue to treat [Haitians in the Bahamas] exactly the way we would like to be treated if we were in their position," he said.