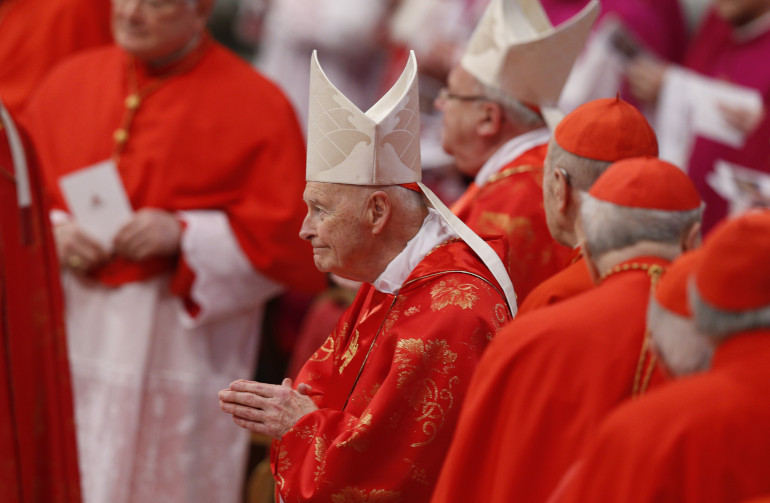 Then-Cardinal Theodore E. McCarrick arrives in procession for the Mass for the Election of the Roman Pontiff in St. Peter's Basilica at the Vatican in this March 12, 2013, file photo. (CNS photo/Paul Haring)

Retired Pope Benedict XVI's personal secretary says that reports the ex-pontiff confirmed some of the claims in a former Vatican ambassador's statement alleging a widespread cover-up of ex-cardinal Theodore McCarrick's abuse of seminarians are "fake news."

"Pope Benedict has not commented on the 'memorandum' of Archbishop [Carlo] Viganò and will not do so," Archbishop Georg Gänswein told the German Die Tagespost newspaper Aug. 28.

Gänswein, who also serves as the prefect of the papal household for Pope Francis, was commenting on an 11-page letter from Viganò, which was released Aug. 25.

Among a host of claims, the letter from the Vatican's former ambassador to Washington alleged that Benedict had placed some sort of unannounced sanctions on McCarrick in 2009 or 2010. McCarrick, who has been accused of sexually abusing seminarians, renounced his place in the College of Cardinals in July.

National Catholic Register, one of two outlets that originally published Viganò's letter, wrote in an Aug. 25 story on its contents that the publication had "independently confirmed that the allegations against McCarrick were certainly known to Benedict."

The New York Times reported Aug. 28 that one of the people Viganò consulted with while writing his statement was U.S. lawyer Timothy Busch, who is on the board of governors of EWTN, which owns the Register.

Busch told the Times that editors at the Register "had personally assured him that the former pope, Benedict XVI, had confirmed Archbishop Viganò’s account."

In his interview Aug. 28, Gänswein said that that any reports that Benedict had confirmed parts of Viganò's statement "lack any foundation."

Viganò's letter claims that Benedict's sanctions on McCarrick barred the prelate from celebrating Mass publicly or traveling, and ordered him to live a life of prayer and penance.

That claim appears contradicted by the historical record, as McCarrick was seen celebrating numerous public Masses throughout Benedict's papacy and continued traveling around the world until a June announcement that the Vatican had ordered his removal from ministry over an accusation of abuse that had been deemed credible.

Since release of Viganò's statement, numerous photos have emerged of McCarrick at the Vatican after 2009, including one of him greeting Benedict on Feb. 28, 2013, the day he renounced the papacy.

A version of this story appeared in the Sept 7-20, 2018 print issue under the headline: 'Fake news': Secretary denies Benedict confirmed Vigano's letter.