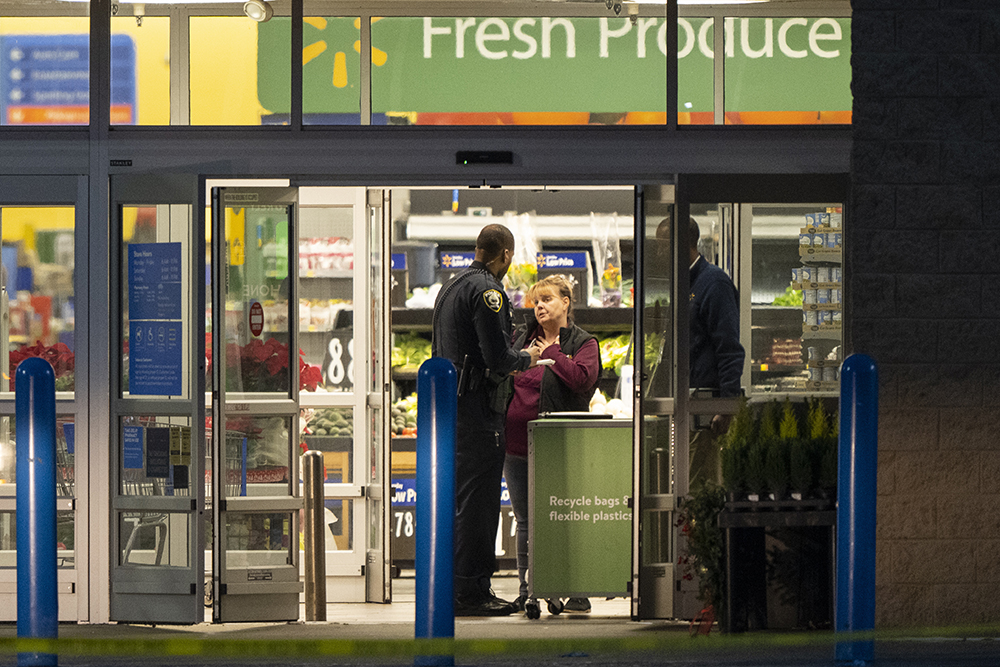 A Walmart employee, center, speaks with law enforcement as they work the scene of a mass shooting Nov. 23 at a Walmart in Chesapeake, Virginia. (AP/Alex Brandon)

Just ahead of Thanksgiving Day, "a time where we celebrate what we are most grateful for in our lives," the nation awoke Nov. 23 "to the somber and agonizing news of more souls lost because of a senseless act of violence" at a Walmart in Chesapeake, said Bishop Barry C. Knestout of Richmond, Virginia.

"This is the second time within two weeks we grieve for multiple lives tragically taken far too early by violence," said the bishop, whose diocese includes Chesapeake, the state's second-largest city after Virginia Beach.

Late Nov. 22, the shooter, who police later said was a Walmart manager overseeing the night shift, opened fire on fellow employees with a pistol in the break room of the store, killing at least six people and injuring at least four others. He later killed himself.

AP reported that the gunman, identified as Andre Bing, 31, and two others were found dead in the break room, another of the dead was found near the front of the story and three others were taken to a hospital where they died of their wounds.

"I once again ask our faith community to hold in prayer all who are directly affected by these actions," Bishop Knestout said. "I continue to pray for those who are hurting today and in the weeks and months to come, as a result of these acts."

"I ask all to continue to pray for our first responders who were called upon to handle yet another heartbreaking scene," he added.

Police did not immediately know the motive for the Walmart shooting, which followed by nine days the fatal shooting of three football students at the University of Virginia in Charlottesville.

Just after 11 p.m. Nov. 13, Devin Chandler, Lavel Davis Jr. and D'Sean Perry, all members of the university's football team, were fatally shot on the school's grounds. Two other students were wounded.

The suspected gunman, Christopher Darnell Jones Jr., was arrested the next morning and has been charged with second-degree murder in the deaths of the three student-athletes.

In a Nov. 14 statement, Knestout asked for prayers for the victims, their families and the university community.

"Like you, I grieve for the loss of life, and my heart breaks for the suffering caused by this troubling act," the bishop said in the statement.

He urged all to "reflect on how violence permeates the culture in which we live, and our efforts to promote peace within our society."